News & Views From the World of Antiques & Collectibles
By Ken Hall
What may be the only surviving passenger ticket from the doomed airship Hindenburg, which caught fire just before docking at the Lakehurst Naval Air Station in New Jersey on May 6, 1937, killing 35 people aboard, has gone on view at an exhibit at the National Postal Museum in Washington, D.C., titled Fire and Ice: Hindenburg and Titanic. The ticket, partially burned, had been purchased on May 1st, less than a week before the disaster, by Burtis J. “Burt” Dolan, in Frankfurt, Germany. Dolan was one of the 35 who perished. 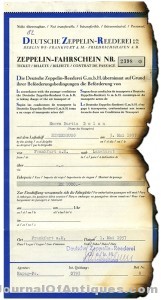 The ticket cost 1,000 German Marks (around 450 Depression-era dollars). Dolan had originally planned to make the trip by boat, but was talked into taking the dirigible by a friend, who told him it would cut their travel time considerably. The plan was to surprise his mother for Mother’s Day. But it wasn’t to be. When the Hindenburg caught fire, Dolan and the friend (named Nelson Morris) jumped from a window. It bought them a little time but didn’t prevent their deaths. Flames consumed the ship in less than a minute.