2,100+ lots include the best of Tony Lasala’s cast iron, Jay Schoedinger’s pressed steel, and Aussie Paul Hale’s steam engines + trains from Jim Fergusson and Warren Heid
VINELAND, N.J. – Bertoia’s is a house of many collector specialties, but it’s a rare occasion when all of those specialty categories come together under one roof in one fabulous sale. That will be the case on Nov. 11, 12 and 13 when Bertoia’s presents its perennially popular Annual Fall Auction featuring selections from many premier collections of toys, trains, banks and holiday antiques. More than 2,100 lots will be offered, and those who cannot join the fun in person are encouraged to take part by bidding absentee, over the phone or live online.
An overview of the expansive three-day event reveals that, by the number of lots offered, there are 160+ containing European and American trains, 150+ European autos, boats and airplanes; 100+ European clockwork toys (including Lehmanns and Martins), 150+ comic character toys, 98 steam plants, 100 penny toys, 190 heavy and light pressed-steel vehicles, and 67 featuring antique advertising. On top of that, the cataloged portion of the auction will be followed by a box-lot selection of holiday antiques available only to those attending at the gallery.
The event is highlighted by Part I of Tony Lasala’s superb collection of cast-iron automotive vehicles. An astute collector for many years, Lasala was able to acquire a many rare and desirable pieces from early dealers and auctions.

“The Tony Lasala collection is unquestionably an important one. Any toy associated with his name will continue to gain instant respect from knowledgeable collectors. The rarity and quality are obvious,” said Bertoia Auctions’ owner, Jeanne Bertoia.
Day 1 is devoted primarily to American toys and banks, and will open with cast iron. Two of Lasala’s favorites are Lot 58, a Kenton City Telephone truck estimated at $4,000-$6,000; and Lot 66, a circa-1929 Arcade white Bekins moving van, $4,000-$6,000. Both were formerly in the Donald Kaufman collection.
Prestigious provenance accompanies many of the American tin toys chosen for the Nov. 11 session. Two highlights that were pictured in Blair Whitton’s 1981 book American Clockwork Toys 1862-1900 are Lot 718, one of only two known circa-1870 George Brown Automatic Waltzers, $10,000-$15,000; and Lot 712, an extremely rare Goodwin carriage – the only one Bertoia’s has ever seen with a seated child, $6,000-$8,000.
Two other tin toys with gilt-edged provenance were once in the prestigious Perelman Antique Toy Museum’s collection. Lot 714, S. Wenner’s Girl on Swing (pat. 1872), is estimated at $6,000-$8,000; while Lot 732, a rare version of the Walking Zouave (pat. 1850s), could stroll away with a winning bid of $1,800-$2,250.
Moving into the American bell toys section, Lot 692, an Ives Leap Frog, is estimated at $7,500-$10,000. “This is only the second Leap Frog bell toy we’ve ever seen,” said Jeanne Bertoia. “When we sold Max Berry’s Leap Frog in 2014, it was the only one known. Then, after the sale, we received a call from someone who said they had one, too, so we are fortunate to be able to bring a second Leap Frog to the marketplace.” 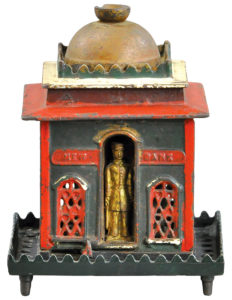 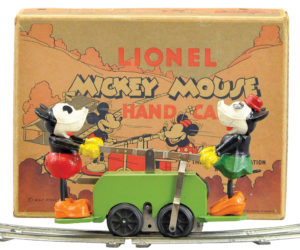 Bertoia’s will be bumper to bumper with upscale European trains and accessories from the Warren Heid collection. Standouts include: Lot 1442, a Marklin Central Station in superior condition, $15,000-$20,000; Lot 1408, an original Ernst Plank hot air trolley, $15,000-$18,000; Lot 1409, an early Carette train in original wood box, $4,000-$6,000; and Lot 1462, a King George V O-gauge train reputedly made by Marklin for Bassett Lowke, $4,000-$6,000.
Fans of American-made trains will want to be on board for the excellent lineup of productions by American Flyer from the Jim Ferguson collection. Additionally, there are many desirable trains and accessories by Voltamp, Lionel, Ives and Carlisle & Finch. Top entries include: Lot 1524, an early Voltamp 2100 B&O train; Lot 1529, a Carlisle & Finch suspension bridge; and Lot 1578, an Ives O-gauge engine with tender and Brooklyn and Buffalo cars.
Saturday’s proceedings will wrap with an eye-pleasing selection of antique petroliana and motoring memorabilia. The grouping includes Lot 1635, a large, Art Deco-style Richland Gasoline auto-themed poster; and Lot 1636, a Francisco Heater automotive sign in outstanding condition.
The Sunday session will be brimming with beautiful pressed-steel vehicles – both heavy and light gauge – from the renowned Jay Schoedinger collection. There are some great Buddy L’s, some having provenance from the Don Kaufman collection; plus Kingsburys, a boxed Marx G-Man car, and a boxed Girard Fire Chief car. Additionally, nine pedal vehicles, including a Gendron fire truck, will roll confidently across the gallery floor. 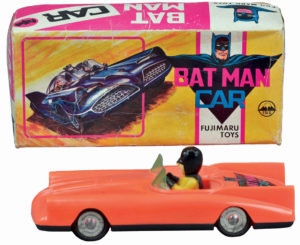 Because Bertoia’s November auction traditionally launches the holiday season for toy collectors, there is always a glittering section of Christmas antiques from which to choose, and this time is no exception. There are Dresdens, Santas of various types, kugels, and glass ornaments. Other holidays represented are Halloween, Easter and Valentine’s Day. Following the cataloged portion of the sale, Bertoia’s will present over 100 holiday box lots for auction attendees only.
Bertoia’s Annual Fall Auction will be held on Friday, Saturday and Sunday, November 11, 12 and 13, 2016 at Bertoia Auctions’ gallery, 2141 DeMarco Dr., Vineland, NJ 08360. All forms of bidding will be available, including absentee, phone or live via the Internet through LiveAuctioneers.com.
Start times: 10 a.m. (Eastern Time) on Friday, Nov. 11; 9 a.m. on Saturday, Nov. 12; and 10 a.m. on Sunday, Nov. 13. Preview the week of Nov. 7-10 from 9am-5pm; on Saturday from 8am, and on Sunday from 9 a.m.
To contact Bertoia Auctions, call 856-692-1881; email toys@bertoiaauctions.com. Additional info is available online at www.bertoiaauctions.com.