A very rare and complete set of the six alternative photos for The Beatles iconic Abbey Road album cover taken and autographed by Iain Macmillan in 1969 is estimated to bring in $60,000-$80,000 at Heritage Auctions’ public auction in New York City.
Now part of Beatles folklore, Paul McCartney had drawn out his idea for the Abbey Road album cover while The Beatles were still recording the songs that would eventually appear on the LP. From these sketches, Paul left artistic license up to his friend, the photographer Iain Macmillan, to transform his vision into a photographic image.
On August 8, 1969, The Beatles arrived at Abbey Road Studios for the crosswalk photo-shoot that would soon take place just outside the building. At approximately 11:30 am on this sunny day, a willing London policeman was asked to hold up and direct traffic on the busy Abbey Road. Iain Macmillan then positioned a step-ladder in the middle of the road, just feet away from the pedestrian crossing, hastily climbed the ladder, quickly steadied himself, and prepared to take the photographs. As The Beatles crossed Abbey Road several times, Iain Macmillan was able to snap six quick shots within a 10-minute timeframe. Once the outdoor session was completed, The Beatles entered Abbey Road Studios to record the finishing touches on the songs “Oh! Darling”, “I Want You”, and ironically, “The End”. The Abbey Road album was finally completed and released worldwide to the public on September 26, 1969, marking the end of their recording career together as “The Beatles”. 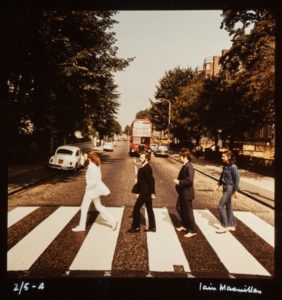 In the sequence of Abbey Road photos taken that day in 1969, Paul is first seen walking in sandals in two (2) images, and the rest barefoot. The barefoot image used on the Abbey Road album cover helped launch the notorious “Paul is Dead” conspiracy theory, which quickly became an international phenomenon. For believers of this urban legend, the Abbey Road cover photo represented a funeral procession with John as the minister, Ringo the undertaker, Paul the corpse, and George the gravedigger. On the finalized back cover design, a group of circles “appear” to form the number “3” just before the added word “Beatles”, thereby creating an additional “clue” confirming the existence of only “3 Beatles” for the theorists. Even now, pop culture continues to make occasional references to this legend.
The image from this brief photo-shoot used on The Beatles album cover has become so iconic that people take the pilgrimage to Abbey Road to stand on the zebra-striped pedestrian crossing and reenact it. There is even a 24-hour webcam of the crossing itself. To this day, artists worldwide continue to imitate the Abbey Road crosswalk photo, including Sir Paul McCartney himself! In 1993, McCartney had his photo and sheepdog digitally inserted into the famous Abbey Road photograph for a live album, titling it “Paul Is Live”, poking fun at the age-old “Paul is Dead” rumor created by the Abbey Road LP cover itself.
Over the years, Iain Macmillen personally issued only a handful of hand-signed and numbered limited edition prints of his images taken that day at Abbey Road with The Beatles, before his untimely death in 2006. These unused alternative images from the Abbey Road cover shoot are extremely rare. 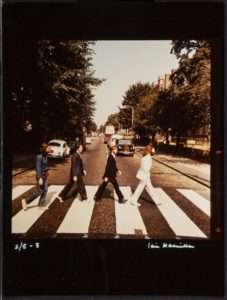 Sometime in the late 1980’s/early 1990’s, Iain Macmillan issued only five sets of the Abbey Road Alternate Photos like the ones offered here. Included in this particular numbered set created by Iain Macmillan are five alternate Abbey Road Beatles crossing photos, plus the Abbey Road street sign photo. The inclusion of the Abbey Road street sign photo was the first time the public had seen this album cover photo in its unaltered form. This included original image is missing the word “Beatles”, the Apple Records logo and all of the song titles that exist on all commercially released Abbey Road album back covers.
Unique to this edition is that for each of the 6 photographic prints included, the entire uncropped Abbey Road image area plus the film frame numbers from the negative itself are visible. Research indicates that this edition of five sets was the only one released with prints made from the full-frame uncropped negatives including the negative numbers of The Beatles Abbey Road Alternative images.
To our knowledge this is the lowest numbered set ever to be offered at auction from an edition of only 5 making this the rarest set of Beatles Abbey Road Alternative Photos to ever come up for sale!

Autographed 45 of The Beatles’ Please Please Me may bring $40,000 at Heritage Auctions