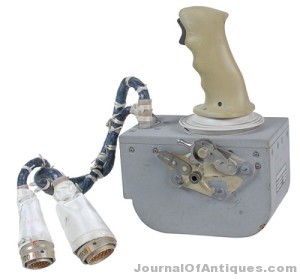 A hand controller used by Dave Scott during the Apollo 15 mission to land on the Moon’s surface in 1971 sold for $610,063 in an online auction that began May 15 and ended May 29 by RR Auction (rrauction.com), based in Boston, Mass. Also, a flown Crewman Optical Alignment Sight (COAS) flown to the surface of the Moon on board Apollo 15, rocketed to $126,179; and Buzz Aldrin’s Apollo 11 NASA-issued lunar “comfort” glove, worn at Tranquility Base in the first lunar landing, hit $61,212. Prices include a 22.5 percent buyer’s premium.