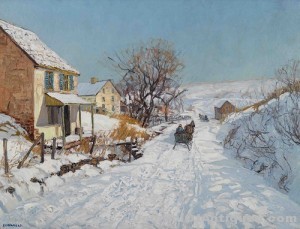 An original oil painting by Edward Willis Redfield, titled Winter Sunlight, sold for $710,500 at a sale of The George D. Horst Fine Art Collection held March 30 by Freeman’s in Philadelphia. Also, an oil on canvas by Frank Weston Benson titled Marshes of Long Point realized $662,500; an oil on canvas by Emil Carlsen titled Copper and Porcelain gaveled for $386,500; an oil on canvas by Daniel Garber titled Glen Cuttalossa fetched $398,500; and Childe Hassam’s oil work The Norwegian Cottage made $242,500. Prices include a 20 percent buyer’s premium.