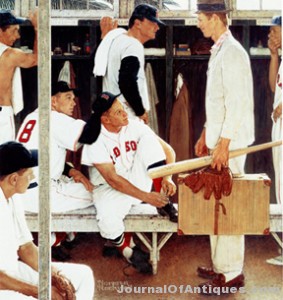 An oil on canvas painting by the iconic American artist Norman Rockwell, titled The Rookie (Red Sox Locker Room), painted in 1957, sold for $22.565 million at an American Art Auction held May 22 by Christie’s in New York City. Also, an oil on canvas by Thomas Moran, titled The Grand Canyon of the Colorado, brought $12.485 million; an oil on canvas by Stuart Davis, titled Anchors, realized $1.8 million; and Edward Hopper’s 1929 watercolor and pencil on paper, titled Coast Guard Boat I, made $1.745 million. Prices include a 12 percent buyer’s premium.