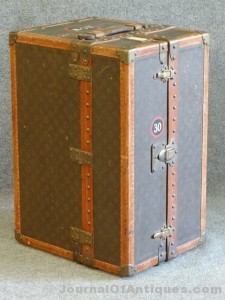 A rare Louis Vuitton split-top trunk sold for $16,100 at an auction held June 8 by Carlsen Gallery in Freehold, N.Y. Also, an oil on canvas by Asher B. Durand, titled Nature Study, changed hands for $24,150; a pair of cast iron Dalmatians realized $7,475; a pair of diamond solitaire earrings went for $5,750; Socks by Pavlos Dionyssopoulos hammered for $5,750; an oil on canvas titled View of Norton Hall and the Park brought $5,750; and a double diamond ring in a platinum setting coasted to $4,600. Prices include a 15 percent buyer’s premium.