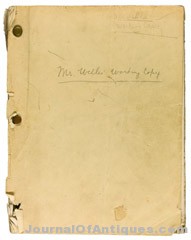 Orson Welles’s own working copy of the script for Citizen Kane, dated April 30 to May 9, 1940 and showing the film’s original title (American) and twice inscribed on the cover, sold for $164,229 at an auction held March 5-6 by Sotheby’s in London. Also, Al Capone’s cocktail shaker caused a stir when it realized $83,365; a marble relief of Hercules and Antaeus, made in Florence, Italy in the 16th century, made $584,389; and a 15th century (Padua, Italy) bronze oil lamp in the form of a male acrobat hit $164,229. Prices include a 20 percent buyer’s premium.

On the Road to… Illinois