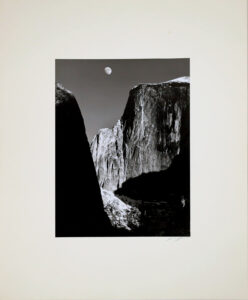 An Ansel Adams original photograph from his Yosemite Series, signed, titled Moon and Half Dome (1960), print No. 10, sold for $9,687 at a December Dreams: Premier Americana Auction held Dec. 17-19 by Holabird Western Americana Collections in Reno, NV. Also, a 12.5-cent token from The Payteller (Rhyolite, NV), gaveled for $5,500; and a Wells Fargo & Co. Express Directory of Chinese Houses (all in California) from 1878 went to a determined bidder for $13,750.