Now you see it…
now you don’t!
By Bob Cahn – “The Primitive Man” 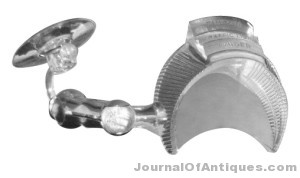 Our object, obviously on GUESS WHAT is to confuse and abuse you, our loyal readers — and this month is no exception.
We’ve perpetrated an optical confusion of mammoth proportions and we’re hoping for your docile acceptance of this zany challenge.
Suction cup attached to an adjustable arm with a prismally faceted frame is an ambidextrously inanimate 41D2″ wide object.
All this is waiting for your perceptive guess from among the following:
Is it?
1.) Lab petri dish mold growth observer
2.) Sun’s rays campfire starter
3.) Private investigator’s fingerprint examiner
4.) Numismatist’s (coin collector’s) coin condition verifier
5.) Butterfly (lepidopterist’s) specimen wing pattern identifying lens
6.) Circa 1950s automobile extended roof overhead traffic light locater
7.) Philatelist’s (stamp collector’s) similar issue matching device
8.) Botanist’s genetic seed development progress examination tool
9.) Manicurist’s cuticle closeup work enabler
10.) Dermatologist’s large pore blackhead treatment examiner.
Have fun coming up with the answer.
’Till next time.*
*Many thanx to the keen eye of Mike Goodman, “King of Stuff,” Sarasota, Fla.
Answer to May’s Guess What? 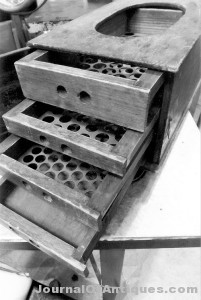 Last month’s  GUESS WHAT featured an early circa 1890s gambling casino’s four-drawer coin sorter (also used by country banks).
The mixed batch of coins would be poured into the oval opening, with each drawer having a tin bottom with punched holes — ranging from large on top, descending to smaller sizes.
One would shake each drawer, with this action causing the coins to cascade by size to the drawers below.
Obviously, the silver dollars were trapped on top. They then could be paper wrapped in rolls.
Today, this is all done mechanically and even in supermarkets.*
*Many thankx to Jennifer Price Studios, Cedros St., Solane Beach, Ca. for generously making this item available.

A Man and His Chips