by Judy Nixon Kent
For a collector of ribbon work, nothing is more beguiling than a bevy of beautiful ribbons skillfully twisted and sewn into a garden of glorious flowers. It is an art that most are unaware of, yet for those who have been seduced by its charms, acquiring and admiring it can easily become an obsession. Whether on garments, vanity table items, or just standing alone as an applique, ribbon flowers are a decidedly feminine and very eye-catching collectible.
Ribbon flowers can be created with both silk ribbon embroidery and ribbon work. Both are embellishments made of ribbon, but the processes used to create each of them are quite different. Ribbon embroidery uses the same embroidery stitches that have been used for years, using thin silk ribbons as the “thread” and a large-eyed chenille needle to sew the motif onto a ground fabric, often silk or velvet. By contrast, ribbon work is a technique that involves the manipulation of ribbons of various sizes to create three dimensional flowers and leaves, all done individually. The pieces are then stitched one by one to a background, either crinoline, a stiff fabric originally made of linen or cotton thread and horsehair (“crin”), or buckram, a coarse linen or other cloth stiffened with gum or paste. Once the arrangement is complete, the excess crinoline or buckram is cut away and the piece is stitched to the item to be embellished. Occasionally, ribbon work and ribbon embroidery appear on the same motif. 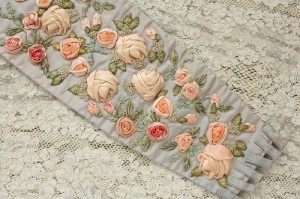 The ribbon arts have a rich history. First used on military uniforms and vestments of the clergy in France in the 17th century, ribbon embroidery became a part of French fashion during the last half of the 18th century. Ball gowns were festooned with ribbon embroidery. As it took months to stitch the elaborately embroidered gowns, only royalty and members of the royal court could afford the finery which was rendered in official embroidery workshops. The court dresses of the day featured large panniers which were hoops that extended the width of the skirt at the side while leaving the front and back relatively flat. The construction of the panniers made an excellent backdrop to showcase elaborate floral sprays of silk ribbon flowers.
Under the patronage of the French kings, couture houses thrived, setting up France, specifically Paris, to be the hub of fashion, a distinction it still bears today. During this period, Louis XV’s mistress Madame Pompadour and later, Louis XVI’s queen, Marie Antoinette, wore beautiful gowns of the finest fabrics with lavishly applied silk ribbon embroidery making them the envied trendsetters of the day. London dressmakers soon copied the French technique of broderie de faveur (literally, “for embroidery”), allowing the ladies of the British court to be as stylish as their French counterparts. From England, the trend spread to the British colonies, but it was still primarily an embellishment reserved for the wealthy due to the cost of producing the ribbons and the time required for the painstaking embroidery process.
The invention of the Jacquard loom in 1801 allowed the ribbon weaving to become mechanized and resulted in increased production and lower prices for ribbons. For a brief period, the popularity of silk ribbon embroidery waned but it was revived in the mid-19th century by the famous French couturier Charles Frederich Worth when his master embroiderer, Michonet, began using beautiful ribbons in variegated shades to adorn the gowns of the wealthy elite. His most famous client was Empress Eugenie, the wife of Napoleon III. By the latter part of the 19th century, silk ribbon embroidery and ribbon work was not only used on ball gowns, but was also added to parasols, millinery, and shoes. At a time when most women learned needlework and were judged on their needlework skills, women used silk embroidery to showcase their sewing prowess, adding it to reticules, caps, gloves, crazy quilts, shawls, and household decorations. 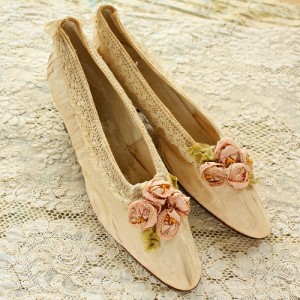 It was in the first decade of the 20th century that ribbon work exploded in use and popularity for not only the rich and famous, but also for the middle class. The designs became much bolder, using less embroidery and more trim made by couching and the applique of three dimensional ribbon work. The French couture fashion house Boué Souers began producing gowns festooned with elaborate ribbon work. The Paris educated sisters, Sylvie and Jeanne Boué, established Boué Souers in 1899 in Paris, but when WWI escalated, they moved their operation to New York, giving the city its first French haute couture house. The sisters were highly successful and were most known for creating elaborately trimmed dresses, known as robes de styles, for royal court events, balls, and other formal occasions. Their renowned ribbon work embellishments were lavishly applied to many of their gowns along with very carefully selected fabrics, lace, and gold and silver threads. Their work was widely popularized in trade and fashion magazines, bringing the breathtaking beauty of the Boue’ sisters’ couture to the attention of masses. Women of more modest means on both sides of the Atlantic wanted to be adorned in exquisite fashions ornamented with ribbon work, so French ateliers began employing women who produced ribbon flowers on crinoline for export, allowing those with smaller budgets to access beautifully made products that just needed to be sewn on the article to be decorated. Ombre’ ribbons (color graduated from light to dark) and lame’ type ribbons (gold or silver metallic threads woven with silk, wool, rayon, or cotton) were quite prevalent, frequently being made with rayon rather than the more expensive silk of previous years. Bright colors were in vogue in these fancy ribbons that were often paired with complimentary metallic trims. The leading department stores in the U.S. and abroad carried these exquisite French imports as well as ready-made vanity and household items bearing beautiful ribbon work designs.
For those wishing to make their own ribbon creations, silk and rayon ribbons and threads could be purchased readily and far more affordably than in the past. French rococo trims, which are ribbon work flowers alternating with leaves to form a thin garland, were sold by the yard and became very easy ways to add ribbon work to a project. Entire instruction booklets, kits, and magazines were dedicated to the art of ribbon work. In 1923, the Ribbon Art Publishing Company produced a commercial series of 3 booklets showing the wide range of projects that could be crafted from ribbon. During the 1920ís, evening wear, lingerie, and children’s clothing were favorite canvases for ribbon work florals. Ribbon work also lent itself very well to the lovely millinery creations of the time, particularly when paired with the beautiful metallic ribbons and laces that had come in vogue, giving cloches and headbands a special panache. Shoes, slippers, reticules, garters, and all manner of boudoir items were decorated as well. Vanity table items such as powder puffs and powder patters were commonly transformed as were handkerchief, glove, and nightgown keepers. Porcelain half dolls were used to create standing powder puff holders, pincushions, whisk brushes, and lamps. With few exceptions, these items were more whimsy than utilitarian, so it is not uncommon to find them unused. The 1920s represented the zenith of ribbon arts’ popularity, but examples can still be found from well into the 1950’s. Ribbons from this next era of the craft tend to be satin, rayon, or even cotton and arrangements are generally simpler, matching the more modern trends of those decades in fashion and home decor. 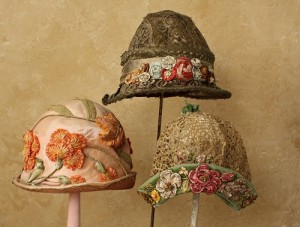 Ribbon art has been around for many generations and continues to be done to this day by skilled needlework aficionados. As a collectible category, it has been quite strong for several years and does not show any signs of slowing down. Many of the finest examples, particularly of articles of clothing, are in private collections or in museums, but lovely pieces can be found at estate sales, auctions, antique shops, antique textiles shows, and online venues such as eBay and Etsy. Like many collectibles, the pendulum swings wide with respect to pricing, so on any given day, bargains can be had on some pieces and other pieces can be priced quite high. Commonly found today are appliques that were either never used or that were cut off and saved from garments whose background fabrics did not survive the years. Depending on the intricacy and size of the applique, expect to pay anywhere from a few dollars for a small, fairly simple design in “shabby” condition to $250 and up for a large elaborate piece with vibrant colors and a minimum of fraying. Antique or vintage garments that are intact and bearing large amounts of ribbon work or ribbon embroidery command a premium, fetching from several hundred dollars up to several thousand. Hats and caps that are in excellent condition start at about $250 and go up rapidly in price, depending on condition, amount of ribbon work, and aesthetic value. Vanity pieces are relatively common, so their value depends on condition and the intricacy of the ribbon work that is applied, ranging anywhere from $10-15 for a small sachet to $175 or more for a particularly nice box. Items with a French manufacturer or department store label still attached generally command higher prices than those without and, typically, items using German half dolls are valued higher than similar pieces using Japanese half dolls. Since numerous items were made by industrious housewives or in small cottage industries, many are truly one of a kind, which adds to the thrill of the hunt for collectors, but does make establishing realistic price ranges quite difficult. The recommendation to anyone wishing to begin collecting these delightful objets de art is to look online at Pinterest, Tumblr, or other photo sharing sites for inspiration, consult with dealers specializing in feminine antiques, particularly antique and vintage clothing, keep the eyes open, and lastly, prepare to be enthralled. Essentially, ribbon work is a collectible that is exceedingly feminine, beautiful, and romantic in nature, so if a certain piece gives the collector’s heart an emotional tug and is beautiful to her eyes, then it will certainly be cherished for years to come, long after the price paid is forgotten.