The Journal of Antiques and Collectibles – February 2012 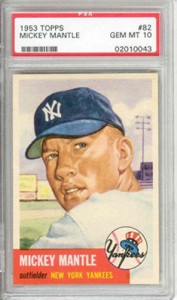 “Right up there with motherhood and apple pie, baseball brings our communities and families together in our perfect ballparks on that perfect summer’s day that is forever implanted in our mind’s eye.”

Pablo Picasso and Thomas Chippendale represent an artist and cabinetmaker whose exceptional talents produced images and objects that have come to define valuable art and furniture. Baseball cards, game used baseball bats, gloves and uniforms worn by professional ball players were never produced with the intention that they would someday become a valuable collectible. Yet, today their value has increasingly come to be appreciated by collectors due to the raw passion and love for the game, as well as the universal admiration held for the singular hero. Beyond other sports baseball emphasizes and celebrates the singular hero–that special player whose extraordinary mental and physical prowess can be the sole pulse quickening factor of a win by a home run, a final strikeout by a pitcher or a fielding gem. At stake is the elation or disappointment of millions of fans. These special baseball moments and the professional ball players who provide them are memorialized in our minds in future decades. Card, wool, leather, and wood may not represent art as we know it, but they are poignantly illustrative of cherished memories and times in our lives. For these reasons, and because baseball delivers a most powerful punch of Americana, we collect.

In 1989, collecting historical baseball artifacts was merely a hobby supported by one major monthly newspaper journal. Today, sport auction venues abound, grossing a minimum of sixty million dollars per year in sales. (not including eBay and private sales).

Investment grade collectibles account for less than two percent of the market share of all baseball collectibles. With these high end specimens, historical value, condition and rarity are of upmost importance. Authentication and grading services aid in preventing fraud and abusive behavior.

What accounts for the recent surge in popularity of investment grade baseball collectibles is perhaps best explained by the James Earl Ray character, the reclusive and aging author Terrance Mann, in the movie [amazon_link id=”B001YV504U” target=”_blank” container=”” container_class=”” ]Field of Dreams[/amazon_link], released in April, 1989. “The one constant through all the years, Ray (Ray Kinsella portrayed by Kevin Costner), has been baseball. America has ruled by an army of steamrollers. It has been erased like a blackboard, rebuilt and erased again. Baseball has marked the time, this field this game. It’s part of our past, Ray. It reminds us all that once was good and it could be again. Oh–people will come, Ray. People will definitely come.”

The Field of Dreams story adds a personal intimacy between father and son, beginning with a voice heard by Ray, saying, “If you build, he will come.” Only at the end of the movie does Ray truly understand that by building a baseball field on his Iowa farm, his father will appear. It is then that Ray makes the request to his father that they play catch. During this scene, many a tear was shed by grown men in the audience, inspired by the longing that they could have the same opportunity, as in the past, to once again play catch with their fathers.

In August 1989, four months after seeing Field of Dreams, I attended my first national sports convention in Chicago, and it was then and there that I became “hooked” on the joy of collecting baseball memorabilia, not realizing at the time that there would be so much future interest in collecting baseball as an investment. For this, much is owed to the advent of the internet and the emergence of sports auction companies in the 1990s.

Jane Leavy, in her bestselling biography, [amazon_link id=”0060883529″ target=”_blank” container=”” container_class=”” ]The Last Boy: Mickey Mantle and the End of America’s Childhood[/amazon_link], writes about how Mantle’s physique was tailored for baseball when she quotes Preston Peavy, a hitting coach in Atlanta. “His proportions were classical, ideal. The length of his arms and legs enable him to implement a modern swing. If you wanted to build a baseball player from scratch, Mickey Mantle was it.” Leavy reports that Peavy estimates that “Mantle’s hands move through the hitting zone .11 to .14 seconds batting right handed, and that his (sic) speed generates a force of 2.5 to 3 times his body weight.

In an interview with Leavy, Alan Nathan, an experimental nuclear particle physicist, reports that when a fast ball is released from the pitcher, the ball turns around in less than 1000th of a second with a collection force of 10,000 pounds.

Note the bent bat after Mantle hits the ball.

Mickey Mantle was born on October 20, 1935. He died on August 13, 1995. He is buried at Hillcrest Memorial Park in Dallas. The inscription on his crypt reads in part: “A magnificent New York Yankee, true teammate and Hall of Fame centerfielder with legendary courage.” Mantle was buried in his pinstripes. The Mantle story best explains the extraordinary mental and athletic skills required to play at the pinnacle of professional baseball.

Accumulating the implements and images associated with baseball connects one to this great and glorious game that is woven into our American history. Right up there with motherhood and apple pie, baseball brings our communities and families together in our perfect ballparks on that perfect summer’s day that is forever implanted in our mind’s eye.

This is the first in a series of articles by Marshall Fogel.

Readers: We would like to hear from you on the topic of sports collectibles.
Please write to us at jmjy2@aol.com or
The Journal of Antiques & Collectibes, PO Box 950, Sturbridge, MA 01566

Leave us a comment about your experiences collecting baseball memorabilia!

Collecting in the Big League