by John Sexton
Q: I have a photo signed by Major General William Vandever that features him, Francis J. Herron and William H. Coyle. It is dedicated to my ancestor Captain James William Towner. (I have his Civil War sword, coat buttons, several Civil War photos and a Bible of those years). I actually tried to find a living ancestor of one of these men, but it seems that Vandever and Herron died without children; I couldn’t find info on Coyle. I just want to know roughly what it is worth for insurance purposes. 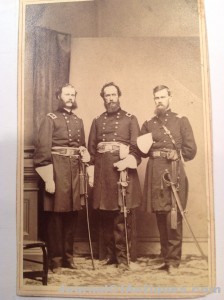 JS: Most signed CDVs of generals have auction results of from a few hundred dollars up to about $1,000, unless they are famous. I can check for comps, if you like, and give you a more exact response. For insurance, you can probably insure it for $500-$1,000 as you won’t replace it easily. The uniform and sword would have much greater value.
I can tell you a little more history on the two generals and Major William Coyle pictured in the carte-de-visite presented by Maj. Gen. William Vandever to your ancestor Capt. James Towner. Your ancestor, as well as the three officers in the CDV, were all original members of the 9th Iowa Infantry, and all took part in the Battle of Pea Ridge, Arkansas, March 7, 1862. Gen. Vandever (pictured in center) was colonel of the 9th leading troops in a battle that led to 40% casualties of his regiment that day (218 total, 74 killed or mortally wounded).
Gen. Francis Herron (on left) was a lieutenant colonel in the 9th that day, leading the regiment while Vandever was leading the brigade, of which the 9th Iowa was part. Herron was wounded, captured and taken prisoner. When he was later exchanged, he was promoted to general and given the Congressional Medal of Honor for his actions.
Major William Coyle (to the right) was also part of the 9th Iowa; he was severely wounded by a gunshot to the shoulder. Though he served the remainder of the war, he died from complications of his gunshot wound in November 1866.
Your ancestor Capt. James Towner, to whom this CDV was presented, was also severely wounded in the head on the same date. He resigned in the field January 30, 1863 at Young’s Point, Louisiana.
That is a marvelous tintype of your ancestor Capt. Towner wearing his officer’s Hardee hat with infantry insignia and the number 9 signifying his regiment, holding his model 1850 foot officer’s sword, and wearing buttons you still retain. As far as insurance value, similar inscribed swords with an interesting history sell for between $2,000 and $4,000. The staff officer-style buttons can be found in shows for about $25 each; the tintype is worth about $500; his presentation gold cane will sell for less than $1,000; and the presentation CDV is worth several hundred dollars. For purpose of insurance, you should insure the grouping in my opinion for $5,000-$6,000. 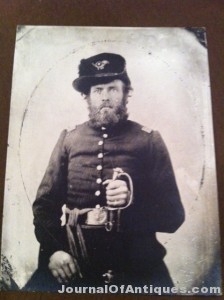 Here is an excerpt from the Iowa in the Civil War website telling of the 9th Iowa at Pea Ridge:
“The enemy opened by a fierce attack on the Union lines, and the 9th Iowa was in the thickest of the fight. The 1st attack was repulsed by the Union forces and it advanced on the Confederates. But it was compelled to retire under a terrific fire of muskets, grape and canister from cannon. The battle continued the whole day with alternating advantage throughout the day. There were occasional intervals, during which the men of both sides replenished ammunitions and removed the wounded to the rear. The fighting was most persistent and desperate, and in no battle of the war was the valor of the American soldier more splendidly exhibited, on both sides. This was the first time the 9th Iowa met the enemy in battle. Its officers and men showed the steadiness and bravery of veterans. If this had been the only service rendered by this regiment, it would have been entitled to the lasting gratitude of every patriotic citizen of the Union, which the 9th Iowa Regiment was defending against those in armed rebellion.
“At night, the survivors lay on their arms, ready to renew the conflict at dawn. Then the Union artillery opened on the enemy, and the fire was promptly returned. In his official report, Col. Vandever says, ‘At this point, finding ourselves exposed to a raking fire from one of the enemy’s batteries on our right, we changed direction to the east. About this time, the First Division, coming into position on our left, we joined in the general advance upon the enemy, the whole cavalry force participating, and the artillery co-operating. The enemy here broke into disorder, and the fortune of the day was decided in our favor.’ 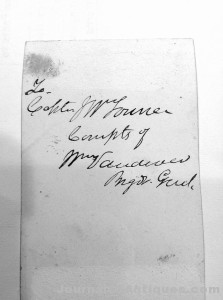 “The entire rebel army was soon in full retreat, and the battle of Pea Ridge ended in a brilliant victory for the Union Army. At the close of his official report, Major General Curtis especially commended Col. Vandever and the gallant troops of his brigade, and says, ‘To do justice to all, I would spread before you the most of the rolls of this army, for I can bear testimony to the almost universal good conduct of officers and men, who shared with me the long march, the many conflicts by the way, and the final struggle with the combined forces of Price, McCulloch, McIntosh and Pike, under Major General Van Dorn, at the battle of Pea Ridge.’
“The loss to the regiment was very heavy. Of the 560 who went into battle, 4 commissioned officers and 34 enlisted men were killed, 5 commissioned officers and 171 enlisted men wounded, and 1 commissioned officer and 3 enlisted men captured, making a total loss of nearly 40% of the aggregate number engaged.”
John Sexton is an independent appraiser and expert on Civil War memorabilia. He is an accredited member of various appraiser organizations. He can be contacted at 770-329-4984 or www.CivilWarDealer.com. If you have a Civil War item for him to appraise, email a photo and a description to mikemcl@mindspring.com.