The World of Washday Collectibles
by Donald-Brian Johnson
Some folks collect teacups. Or thimbles. Maybe even swizzle sticks. Tiny treasures that are compact, easy to display, and even easier to store.
Other folks collect washing machines. And dryers. And washer-dryers. These are definitely not tiny. Displaying (or even storing) them requires a generously-sized (and otherwise empty) basement or garage. But these jumbo collectibles and their colorful accouterments—from clothespin bags to dealer signs, vintage soap boxes to wicker laundry baskets—are cleaning up among today’s collectors.
The reasons? For baby boomers, the answer may be a fond rekindling of childhood memories. For fans of Mid-century Modern, the streamlined design of these machines is a tangible representation of the space-age technology that fueled the 1950s and 60s. For the rest of us, they’re just fun to look at. 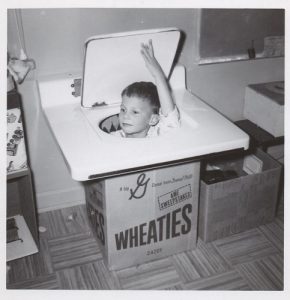 misty memory: the “Xeros,” a washing machine prototype produced in England, uses less than a cup of water per load.
Ah, but does it come in avocado?
Didn’t think so!
Donald-Brian Johnson is the co-author of numerous Schiffer books on design and collectibles, including Postwar Pop, a collection of his columns. He makes do with an apartment washer and dryer. Please address inquiries to: donaldbrian@msn.com
All washday collectibles courtesy of Greg Nunn
For more info on the wonderful world of washers (and dryers, too) check out the collectors’ website: automaticwasher.org
Photos by Donald-Brian Johnson & Hank Kuhlmann


Clean as a Whistle