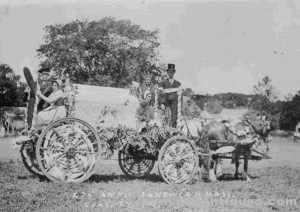 The town of Sandwich, Massachusetts, Cape Cod’s oldest town and the “town that glass built” celebrates its 375th anniversary in 2014. Festivities abound as Sandwich enthusiastically honors both its beginnings and looks to its future.  Partnering in these endeavors, the Sandwich Historical Society and Glass Museum chronicles the town’s evolution from settlement to industrial leader to an historic, museum town.
SANDWICH GLASS
Settled in 1637 and incorporated in 1639, Sandwich was originally settled by the English and established itself as an agricultural community whose main export was timber.  Even during the American Revolution it remained primarily agrarian, supplemented by coastal fishing.  But in 1825, the landscape of Sandwich would change because of Deming Jarves, a Boston businessman and former agent of the New England Glass Company of East Cambridge, Massachusetts.
Deming Jarves, the principal founder and manager of the Boston & Sandwich Glass Company, did not choose Sandwich as a site for the glass factory because of the beach sand that was readily available.  Beach sand is too impure to make glass which requires pure quartz silica.  The Company shipped in pure silica supplies first from New Jersey and New York and later from the Berkshire Hills in western Massachusetts.
Jarves did choose Sandwich because of its proximity to a shallow harbor and the possibility of a canal being built through Cape Cod that would all for the shipment of goods to ports south.  The local availability of timber could be used to fuel the glass furnaces.  Even the salt marsh hay and grasses could be used for packing material. 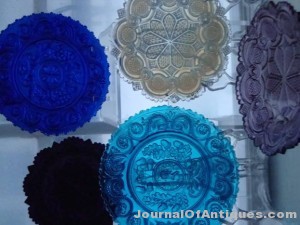 Reference:
Archives at the Sandwich Historical Society/Sandwich Glass Museum
Klich, Lynda and Benjamin Weiss, The Postcard Age, Selections from the Leonard A. lauder Collection, Boston, MA, MFA Publications, 2013
Lovell, Jr. R.A. Sandwich, A Cape Cod town, Town of Sandwich, Massachusetts, Archives and Historical Center, 1984, Print
Archives of the Sandwich Historical Commission
The Sandwich Historical Society and Glass Museum is a 501 (c ) (3) tax-exempt organization.  It is open to the public seven days a week.  Hours are Monday-Sunday from 9:30 – 5pm.  Glassblowing daily, on the hour.  Admission is $8.00.  For directions and information visit www.sandwichglassmuseum.org.