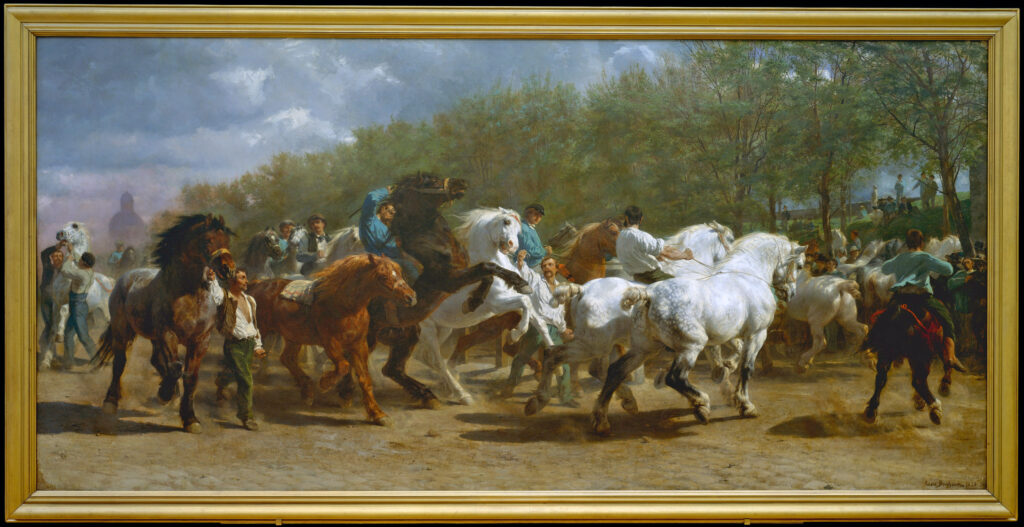 If you took a stroll through the European Paintings galleries at the Metropolitan Museum of Art, you’d undoubtedly encounter Rosa Bonheur’s Le Marché aux Chevaux, or The Horse Fair, one of the finest achievements of 19th century French art.

The Horse Fair made its debut at the Paris Salon of 1853 and quickly became one of the most critically acclaimed paintings of its day. It also secured Bonheur’s place alongside George Stubbs and Jules Moigniez in the pantheon of great artists of the Animalier movement. A closer look at this painting demonstrates why.

The Horse Fair crackles with energy and danger. In the foreground, several handlers attempt to corral a team of horses for prospective buyers. The horses twist and turn within the frame, straining against their bonds or rearing to buck their riders. The men seem to be at their mercy, holding on for dear life. In the bacckground, well-dressed spectators watch this thrilling spectacle take place within the sedate confines of the tree-lined Boulevard de l’Hôpital.

Horse fairs were a common occurrence in nineteenth-century Paris, but the beauty of Bonheur’s painting lies in its epic, even cinematic, composition. The monumental scale of the work (eight feet high and sixteen feet long) allows for the animals to be rendered with anatomic precision. Each horse moves differently within the frame, and Bonheur shows their muscles coiling, their hooves kicking up dust and hair whipping through the wind. In contrast, the figures of their handlers are less distinct. These men merely serve to accentuate the beauty of these majestic creatures. Her horses look like they could burst free of the painting at any moment.

By the time she embarked on The Horse Fair, Rosa Bonheur was already an established painter in the Animalier tradition, an artistic movement begun in the late eighteenth century centered on the realistic depiction of animals. Having been raised by artist parents, Bonheur began painting from an early age and supplemented her education with classes on animal anatomy at the National Veterinary Institute in Paris. She also made detailed studies of animals at the Parisian slaughterhouses and the livestock at nearby farms.

Indebted to the work of fellow Animalière George Stubbs and Antoine-Louis Barye, among others, Bonheur was also inspired by the majestic depiction of horses in the high-relief marble sculptures from the Parthenon, on view at the British Museum since 1817 and published widely. Her painting style conformed to the prevailing Realism movement in French art, which favored modern subjects, direct observation of the natural world, and attention to detail and anatomy. Yet the unbridled passion evident in her work harkened back to an earlier phase of Romanticism, as typified by the works of Eugène Delacroix and Théodore Géricault.

In 1849, the French government commissioned Bonheur’s first major success, Ploughing in the Nivernais. This bucolic image of a team of oxen set in a rural French landscape won a First Medal at the Paris Salon and gave Bonheur the freedom to embark on her next and far more ambitious project.

At the time, few women artists depicted horses as subjects in their painting; in fact, in an initial meeting with the French Minister of Fine Arts to secure an official commission, Bonheur was told that the subject of The Horse Fair required a more experienced hand to be successful. Nevertheless, she persisted. Bonheur spent the next eighteen months visiting the horse market on the Boulevard de l’Hôpital twice a week to sketch the enormous draft horses seen in The Horse Fair. She even secured permission from the police to dress in male attire in order to discourage unwelcome attention while closely observing her subject. Looking at the finished product, you feel as though you are watching the action through Bonheur’s eyes.

Rosa Bonheur was only 31 years old when The Horse Fair made its Salon debut in 1853. At the time, it was the largest painting executed by any animal painter, and critics and artists alike hailed it as a triumph. Eugène Delacroix even noted in his journal that Bonheur’s painting had a greater effect than any of the previous years’ entries.

In the mind of its Victorian audience, the artistic achievement of The Horse Fair had partially to do with Bonheur’s ability to “paint like a man.” One art journal called it “a wonderful work for any painter; but as the production of a female it is marvelous [sic] in conception and execution” while another expressed surprise that “so masculine a work is the production of a feminine hand.” That she was considered the exception to the rule undoubtedly enhanced the spectacle around the painting. The Horse Fair also lent itself to a myriad of interpretations, primarily as a metaphor for taming the “wild” and “rebellious” spirit of a woman, though others saw it as a triumphant reflection of French imperial power. Rosa Bonheur likely intended for this painting to serve as a testament to her talent and prowess, and even referred to The Horse Fair as her own “Parthenon frieze.”

With the success of The Horse Fair, Bonheur was promptly declared “hors de concours” (“outside of competition”), meaning she would no longer have to submit her entries to the Salon for acceptance. She was formally accepted into the ranks of internationally renowned French artists and secured her financial independence. But the story of the painting does not end there.

After its groundbreaking debut at the Paris Salon, an international cohort of art connoisseurs competed for ownership of The Horse Fair. Charles de Morny, the same French Minister of Fine Arts who had initially passed on The Horse Fair in favor of another Bonheur painting, attempted to reclaim the commission but was refused. Apparently, Napoleon III also made an offer that Bonheur rejected as being too low.

After being exhibited throughout Europe, with stops in Ghent and Bordeaux, The Horse Fair was finally purchased by British art dealer Ernest Gambart in 1854 for a staggering 40,000 francs. French art critics lamented the sale to England as “a national loss.”

Gambart promptly took the painting on a tour of Britain, where it was shown to Charles Eastlake, John Ruskin, and Edwin Henry Landseer, a fellow Animalière famous for his paintings of dogs and horses. To cap it off, in 1855 Queen Victoria requested a private viewing at Buckingham Palace. Gambart likely hoped the Queen would offer to purchase the painting; instead, Queen Victoria sent a note expressing her admiration, which undoubtedly enhanced its value.

After Bonheur added some finishing touches to the painting, The Horse Fair made its way across the Atlantic. After being exhibited at several premier galleries in New York, Gambart sold the painting to New Jersey collector William P. Wright in 1857. In 1866, Wright sold it to Alexander T. Stewart, a New York department store magnate. The final owner was millionaire Cornelius Vanderbilt, who purchased the painting at the estate sale of Stewart’s widow in 1887. A prominent philanthropist and patron of the arts, Vanderbilt secured The Horse Fair as a gift to the Metropolitan Museum of Art, where it resides today as one of the finest pictures in the museum’s collection.

The Horse Fair remains one of the most celebrated works by an artist working in the Animalier tradition. Rosa Bonheur combined her training as a painter with the empirical eye of a scientist, and the ongoing relevancy of her work speaks to a sustained popular interest in animal biology and behavior. As Bonheur’s 200th birthday is fast approaching (2022), this is a milestone worth celebrating. 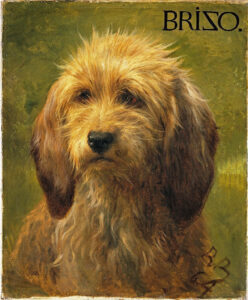 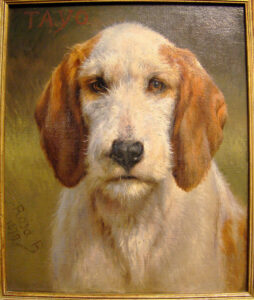 Antiques Peek: In the Show Ring with Breyer

Great Collections: Art, History, and Entertainment are on Display at the New England Carousel Museum