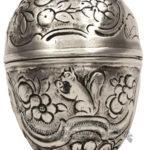 The well known antiques writer Mary Earl Gould was the first to introduce mechanical nutmeg graters to modern collectors, when her 1958 book Tin & Toleware featured her collection of six graters.
In today’s market, her examples are of the more common varieties, with rare kitchen-mechanical nutmeg graters commanding thousands of dollars from top buyers. One major kitchen collectibles dealer, JoAnnea Delphia from Vintage New England of Connecticut, reports that “mechanical nutmeg graters and rare raisin seeders are our strongest markets – when we can find them.” Also specializing in rare kitchenwares, Paul Smith of Over Hill Over Dale in Iowa, agrees, saying “Nutmeg graters move well, especially rare ones; they sell stronger than ever!”
The history associated with nutmeg graters spans roughly 400 years and the kitchen-mechanical nutmeg grater is one piece of a broader spectrum. Because nutmeg graters differ so widely, various kinds of nutmeg graters appeal to different kinds of collectors.
The kitchen-mechanical nutmeg grater enjoys popularity among those collectors drawn to the unique, obsolete, rare or unusual. While some are fascinated by their gadgetry, technology or patent history, some collectors seek to buy earlier forms or more ornamental examples in ivory, silver or gold – the rarest of these reaching the 5-figure level in U.S. dollars. And, there is something for everyone; the common tin “box grater” can still be found for under “5 bucks.”
Some historical background helps to understand what draws a collector’s interest.
Nutmeg: A Brief Botanical and Trade Historical Perspective
Before the fifteenth century, nutmeg was burned as medicinal incenses. By the late sixteenth century, it was attributed to possess an exhaustive assortment of healing powers due to nutmeg’s mildly hallucinogenic quality when consumed. A few of nutmeg’s proven medical remedies remain in our modern pharmaceutical textbooks.
The nutmeg tree, Myristica Moschata, originates from the tiny volcanic atoll in the East Indies, historically known as the Banda Islands. Today, this location is more commonly identified as seven tiny clustered islands in Indonesia, well hidden within the Banda Sea.
Predating written records, it is speculated that the earliest trade in nutmeg occurred with China. By the eleventh century, caravan trade routes transported nutmeg across the Arabian deserts to the commercial centers in Venice, which then supplied all of Europe. In 1512, an ocean route to Europe was established by the Portuguese who discovered the source of nutmeg as the Banda Islands, and thus developed the direct water passage south of Africa to supply Europe with nutmegs and other Asian commodities. One hundred years later, the combative Dutch invaded these Portuguese outposts, taking control by force to create an ironclad monopoly in the trade of nutmegs, mace and cloves; an exclusive trade that remained in effect for more than two centuries. By the late-eighteenth century, rival ventures by the French and the English were successful to smuggle seedlings and small nutmeg plants to establish plantations in distant regions, far from Dutch hostilities. By the early nineteenth century, the long standing Dutch monopoly was finally broken with the successful cultivation of nutmeg plantations in Sumatra, French Guiana, the Mauritius, and various West Indian Islands; Granada becoming a chief world supplier secondary only to Indonesia.
A Fascinating Innovation – the Nutmeg Grater
Nutmeg graters originate from seventeenth century England. The earliest graters for nutmeg (known before 1650) were fitted inside the lids of lignum vitae wassail cups or were incorporated within spice tureens for the tables of the ultra-wealthy. Before long, delicate silver graters were carried in the pockets of the gentry, who also toted luxurious “traveling sets” of tableware, sometimes containing a nutmeg grater.
Nutmeg became popular among the upper class who flavored their 17th and 18th century alcoholic beverages, such as punch, “cyder,” pale wines and ales. The spice was consumed both medicinally and as a culinary delight. The first pocket nutmeg graters (Circa 1660-1725) were constructed simply as a cylindrical silver grater housed inside a tubular silver case. By the eighteenth century, fashion trends influenced the form and functionality of the nutmeg grater. Catering to the affluent, novel pocket graters were created in an ever increasing variety of shapes and styles, constructed in silver, gold, ivory, silver-form brass, Battersea enamel or exotic wooden mosaics. Also during this period, simple primitive nutmeg graters for domestic use were made from wood, sheet iron and tin.
By the nineteenth century, the Dutch monopoly had long declined and so too did the high price for nutmeg. Before 1850, cooking instructions routinely called for measurements as “a scrape of nutmeg,” “a quarter of a small nutmeg,” “an atom of nutmeg,” “slices of nutmeg,” “take three scrapes nutmeg;” indications that nutmeg was freshly ground at the time of use. The study of published Mid-Victorian and American Civil War cookbooks shows that approximately one out of five recipes contained nutmeg as an ingredient. The spice was used in everything from baked apples and pumpkin pie to lamb chops and mulled wine. Tin and woodenware spice canister sets, common to every household, bore labels for contents of “ginger, pepper, cloves, cinnamon, allspice, mace and nutmeg.” A plain grater was often conveniently contained within many of these tin units. During the second half of the nineteenth century, an array of patented mechanical laborsaving devices for nutmeg came into fashion. 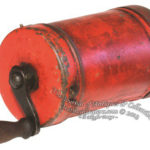 The Kitchen-Mechanical Nutmeg Grater
The “kitchen-mechanical” or “patented” nutmeg grater is purely an American innovation. By the mid-nineteenth century, the small and wood-like nutmeg was still a laborious and inconvenient spice to granulate, especially when significant quantities were needed.
About 1850, Albert Hadley, a baker from Lynn, Massachusetts, was first to resolve this problem when in conjunction with his neighbor, the tinsmith Edmund Brown, they produced their cumbersome “Brown & Hadley Rotary Nutmeg Grater.” This invention was designed as a tool for bakers, but the profitable venture soon gained broader interest. The success of the Brown & Hadley nutmeg grater attracted the attention of the neighboring tinsmith, William Bradley, who quickly created a rival product. On July 25, 1854, (application filing date February 1854), William Bradley was the first to obtain a patent for a nutmeg grater. Lynn became the birthplace of this American invention. Spanning the next 40 years, nearly 20 mechanical nutmeg graters (10 receiving U.S. patents) were created within an 8 mile radius from the Hadley Bros. Bakery and nationwide, more than 135 U.S. patents for nutmeg grater patents were obtained, most issued in 1867, the year following the Civil War. By 1890, large tin kitchenware manufacturers each produced their own mechanical nutmeg grater. Often, these later examples were produced in absence of a patent, marked “Pat. Applied For” or “Patent Pending” to ward off counterfeiting these non-patented protected designs. 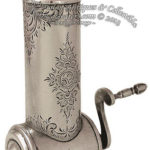 When the United States’ Pure Food and Drug Act of 1906 assured that the “ground nutmeg” sold in containers was ì100% pure,î this spelled an end to the need for a kitchen-mechanical nutmeg grater. Manufacturing of mechanical nutmeg graters dwindled after WWI.
Although none of the American “mechanicals” are ordinary, about 10 were successfully marketed on a wide scale and, therefore, readily available to today’s collectors. But, it is the “product failure” that is most precious. Kitchen-mechanical nutmeg graters that were commercial disappointments, that were poorly marketed to the public, whose manufacture lacked sufficient fiscal backing, or whose construction was too flimsy to survive; these are now the rarest and most sought after by collectors.
Investment Values and a Word of Caution 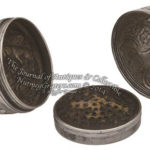 Current valuation for kitchen-mechanical nutmeg graters (as cited from Carol Bohn*) are “COMMON: Under $100; AVAILABLE: $100 – $250; SCARCE: $250.00 – $1500; RARE: $1500 – $5000” (the proximate photographs of kitchen mechanicals reflect the Bohn’s Rating-Valuation Scale*). The value for silver nutmeg graters at auction range from a few hundred dollars to the record price of $35,000.00 for an item having a royal legacy. Illustrated within this article are among the rarest examples of nutmeg graters at their current optimal values.
Now, a word to the wise: With rarity and high value, comes fakery. Starting in the late 1990s, a documented increase in the number of purported “American” silver nutmeg graters were marketed for sale, most seemingly retailed from New York City and its vicinity. To the advanced collector, these maker’s marks looked to match published examples – in a quality that would fool any expert. Considering fact based evidence and rigorous scientific testing (including energy dispersive x-ray fluorescence analysis [ED-XRF]), originally-unmarked antique silver nutmeg graters were substantiated to have faked maker’s marks, newly applied to falsely represent historically significant silversmiths. Regarding antique silver in general, this discovery may be only the tip of a much larger iceberg.
Collectors have vigorously searched for nutmeg graters for more than 50 years, and most rare examples are already collected. Often, these rare examples pass from one major collection directly into another major collection, never appearing on the open market. Monetary value is significantly increasing for these rare varieties of nutmeg graters, while market prices for more common and available types have languished. For advanced collectors, it is the discovery of the “yet unknown” example that creates the fascination and constant drive toward collecting and study of nutmeg graters. For the new collector: Buy based on what you know and what appeals to you. Collecting nutmeg grater is well suited to any level of collecting – novice or advanced. Happy hunting.
Jim Klopfer writes, researchers, collects and lecturer about nutmeg and nutmeg graters. Since 2014, more than 18,000 viewers have visited his educational website: NutmegGraters.com (The Grater History of Nutmeg) ©2013-2016.
America in the Kitchen From Hearth to Cookstove, Linda Campbell Franklin. House of Collectibles, Page 115, 1976.
*American Patented Nutmeg Graters 1854~1935 … Plus, Carol J. Bohn, Heritage Printers, Page 524, 2015.
Antique Tin & Tole Ware, Its History And Romance, Mary Earle Gould, Tuttle Co., Page 42, 1958(1967).
Early American Silver, Martha Gandy Fales, Excalibur Books, Page 102-103, 1970. 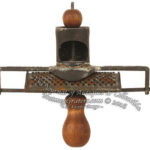 Top Ten Interesting Facts About Nutmeg
1. Two different spices come from the tree Myristica Moschata: Nutmeg is the seed from the tree and Mace is the stamen.
2. While trees in their Banda homeland are described as reaching 65 feet or taller, those cultivated in other lands are reported to grow only from 20 to 25 feet tall.
3. The essential oils contained in two nutmegs is toxic for an average sized person.
4. Mace is a beautiful, vibrant crimson red color. Even when dried for market, the “blade of mace” retains this color for a long time before fading to light tan. Because it required a lengthy period to transport during the 18th and early 19th centuries, shoppers were accustomed only to the tan coloration, they mistakenly threw out any mace retaining its original red color, believing that it had spoiled.
5. There were countless European wars fought over the possession of the Banda Islands. As part of the Treaty of Breda, signed on July 31, 1667 between England, the Netherlands, France, and Denmark-Norway, the English gave up their claim to the desert island Run (Banda Island) in exchange for the Dutch-owned New Amsterdam, a.k.a. Manhattan, thus defining the British Colonies as New York, New Jersey, Pennsylvania and Delaware.
6. The oil found in an ordinary nutmeg significantly adds to the intoxicating effect of alcohol, and thus, nutmeg is illegal contraband excluded from modern prisons.
7. In 1704, Christiani Paullini published his 900 page medical text Nuces Moschata Varice Cum Floribus; the entire text pertained only to the treatment of medical ailments with the use of nutmeg.
8. The “nutmeg trees” Myristica Moschata are not seasonal and produce fruit throughout the entire year. Along with the nutmeg, a secondary crop, mace, both are usually harvested at established intervals three times each year.
9. About nine years are required before the tree will flower and 14 years are necessary for a fertile harvest.
10. Both a “male” and “female” species are essential for the nutmeg tree to flower and fruit into production of the bright yellow, peach sized fruit which contains the seed, nutmeg and the stamen, mace.

The Nutmeg Grater: A Kitchen Collectible, And So Much More

Hearth to Hearth: Sugar and Spice and Everything Nice