A lark is a type of bird, so when you hear the term “Mudlark” you might think it also refers to a bird. However, a Mudlark is actually a person with a particular type of interesting hobby. That hobby is scavenging for valuables in mud or the shallows of certain bodies of water, especially rivers. Mudlarking can be quite an interesting hobby since one never knows what might be lurking below the surface.

Mudlarking, as both a term and a practice, was not popularized back when boats first sailed the seas. The popularity of mudlarking began in the 18th century. It was London, England where it was first popularized, but not as a hobby. Instead, it was a vital part of daily life for many London residents due to the economic circumstances at the time.

London was known for its large population of people living in poverty. It was also known for having workhouses, a total institution providing housing for those living in complete poverty. Because those workhouses did not meet many basic human needs, London residents would do anything possible to avoid them. Mudlarking became a way for the poor to make some money by salvaging goods from around the Thames River to use or to sell for a few farthings. Early on, these Mudlarks were mostly children with a smattering of hardy women all gathering to make ends meet.

The unique natural environment of the Thames—with its currents and contents—makes it the perfect spot for the Mudlark. The dense “anaerobic” mud (there is no oxygen in the mud) means everything from pottery to metal to glass and even wood and some soft goods is well preserved. Items that land in the silty mud are quickly covered and then moved about with the current, creating a great mix of pieces to be pulled from the river at any one spot. Recovered items are called “released” when they are back in the hands of people.

The Thames was and continues to be one of the biggest sources for mudlarking finds in London due to its size (215 miles long) and its history – the role the river played as civilization came about.

How Did All That Stuff Get There?

According to brewminate.com, “There are many reasons why objects were deposited or accidentally lost in the river. For instance, the earliest settlers deposited votive offerings into the Thames as they considered the waters to be sacred. Celtic tribes also deposited valuable, highly-decorated military items in the Thames. In the Medieval period, pilgrims returning from their long journeys abroad or pilgrimages in Britain would cast their pewter souvenir badges into the river to express their gratitude for safe passage on their journey.”

As the city and the country grew, London became known as the world’s busiest port city. The river was the country’s center for industry, trade, and international travel. According to the Thames Festival Trust, “For eleven continuous miles in London, both sides of the river were packed with docks, wharves, warehouses, shipbuilding yards, ship-breaking yards, fish markets, factories, breweries, slaughter­houses, municipal buildings, offices, pubs, and houses.

The biggest problem created by the port’s popu­larity was the length of time it cook ships to unload cargo. Often, they had to remain docked for a month or more at a time until enough people were available to load or unload cargo and bring it to one of the many warehouses near the docks.

The stationary nature of the docked vessels in London provided easy targets for another type of population at the time – thieves. As the thieves looted the vessels, they often dropped goods along the shoreline when making their hasty retreats. Mudlarks later would come along and claim those goods when the ship and the ride went out. Then they sold the goods to help them pay for shelter, food, and necessities.

By the late 19th century about 300 Mudlarks would swarm to riverbeds at low tide to see what the sea brought into the Thames. The Victorian Era created a sec­ond wave of mudlarking pop­ularity thanks to the signifi­cant amount of infrastructure projects happening at the time. London Bridge was being rebuilt, and the increasing population brought with it a need for creating new embankments and sewage systems that tore up the land all along the Thames.

With all the construction, historic finds were being discovered by the workmen and laborers in the area. Many of the treasures were brought to shops, museums, and collectors who were more than happy to pay large amounts of money to buy them.

On top of that, each day the tide would bring with it hundreds of items that had been dumped, lost, or deserted in the water over the centuries.

Today, mudlarking along the Thames is as popular as it ever was, but for entirely different rea­sons. Modern London Mudlarks must have permits and belong to a special club. They are typically most inter­ested in historical preservation. In fact, they are required to report older finds to the Museum of London. Doing so helps preserve the rich history of the city.

Mudlarking in the U.S.

The term “mudlarking” is perhaps not as popular in the United States, but the process is continually becoming more and more popular. American Mudlarks tend to focus on bodies of water that were used for large amounts of commerce and transportation throughout the centuries. The Mississippi River is certainly at the top of that list. Mudlarks along the Mississippi have found old city seals for the City of St. Louis, bullets and other Civil War memorabilia, glass bottles, pottery, and more. Other popular areas include rocky shorelines that may hold items from shipwrecks or things lost at sea. The Hudson, Susquehanna, and Savannah rivers hold treasures from the early days of the U.S. along with Native American findings and natural discoveries such as fossils and bones. All these objects tell the stories of the river’s history.

One method becoming popular when mudlarking in America and Europe is that many modern Mudlarks now use magnets to help them search river shorelines and shallows. Many American magnet fishing aficionados come up with modern finds. For example, some have found safes, shopping carts, or vehicles. However, rare historical finds also pop up from time to time. For example, a man in Virginia discovered an approximately 300-year-old boat anchor in 2021. Such finds help us piece together American history and document it more accurately.

Mudlarking is common in many parts of the world today, and certain areas are known for specific finds. For example, London Mudlarks commonly find clay pipes or portions of them along the Thames. That is due to the number of pubs and hangouts that used to exist along the river’s edge for sailors and the popularity of pipe smoking.

In the U.S. there is one area known as “Dead Horse Bay” in New York where several businesses—including glue factories—would not only dump their waste, but other materials thanks to the industrialization of the region. Thousands of bottles, broken and intact, and antique, litter the shoreline after the trash heap burst in the 1950s.

Other items such as pottery, clothing, etc. continue to wash up, and scavengers continue to dig in the mud to discover more history. Happenings like this, along with deserted buildings and trails near ponds and lakes, all add up to a perfect spot to scavenge.

Other mudlarking finds that are popular regardless of country or region include coins, buttons, and bottles that are often found along the shores of most rivers where boat travel is or was popular. Brooks and waterways that go through old homesteads or smaller towns are also teeming with items. 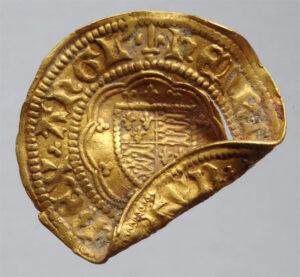 Not surprisingly, coins—especially antique coins—are among the most desirable mudlarking finds. In London, commonly found coins include those used in the city over the centuries, such as George II halfpenny coins that were commonly considered not just currency, but good luck charms in the 1700s. In the U.S., American and British coins are the most common, but rare old coins from other countries can also sometimes be found in American waterways thanks to the country’s long history of immigration and commerce.

When looking for coins in the mud, keep in mind their values may vary greatly based on age, type, and condition. Unlike the Thames River environment, many years in mud can erode, discolor or otherwise damage certain coins over time. Some such coins can be cleaned.

However, some coins actually have more value to Mudlarks or other collectors when they are uncleaned. Coins that have higher values after cleaning need a professional cleaning for the best results.

Before cleaning any coins, check with someone who specializes in Numismatics, or the study of coins and coin collecting, before you attempt to clean it. You may be washing its value away.

When mudlarking in any state or country, there are a few things to consider. For example, you need to check local laws, first. You may have an obligation to report or turn in certain types of items you find. You may also need a mudlarking or magnet fishing license.

Second, do not expect every item you find to have a monetary value.

You may find yourself discovering a lot of trash before you locate any potential treasure. When you do find garbage, such as soft drink cans, rest assured that is equally good, just in a different way. Cleaning waterways makes them more enjoyable for everyone. You can throw such objects out or even opt to turn them into sculptures if you are in an artistic frame of mind. Then you can always have fun mudlarking, regardless of what types of specific objects you find.

Be open to finding anything from times past to times present and enjoy your hike into history.

Before you head out, pack a couple of basic tools including some­thing to dig with such as a small spade or hoe, a metal detector if you have permission to use one, waterproof boots, a waterproof bag, a bottle of water, and if you do not want to get your hands muddy, some gloves.

Once you have gathered your findings, speak with your local history museum to separate the valuable from the invaluable. Even something that may be worth little money may have value to someone in some way. Don’t be afraid to share your discoveries at a local history museum or at your local library for all to enjoy. You may see another Mudlark finding its new hobby.