The parlor was traditionally a gathering room where family members and friends would meet, eat, socialize, and relax. Smaller and less affluent homes had the Kitchen, Dining Room, and parlor all merged-together in a single room. Larger and wealthier homes often had a separate parlor where people gathered for formal occasions such as holidays, births, weddings, or funerals. But the Parlor was indeed the center of colonial life. Actually, the word “parlor” was derived from a French verb “Parle” which means “to speak,” which is what usually transpired in the parlor.

In colonial times, the center of the Parlor was the hearth. It was used for cooking, heat, light, and comfort. At the end of the day, the family would gather around the hearth and catch-up on the day’s activities. They would talk, read, prepare for bed, and relax before the next day. The parlor and the hearth were so vital to daily family life that special furniture such as the settle and wing back chair was designed for use in it.

With the Colonial Revival Movement (1880-1940) well underway, enthusiasts sought to bring what they believed to be traditional values and aesthetics into contemporary early 20th century life by restoring and preserving old houses, by reproducing new furniture in the style of the old, and by creating works of art depicting early American life.

Interest in early American heritage fueled Wallace Nutting—a Congregational minister-turned-entrepreneur—to pursue ventures that included selling hand-colored photographs, purchasing and restoring a chain of historic houses, and reproducing the finest styles of early American furniture ever made in the 20th century.

From Minister to Photographer 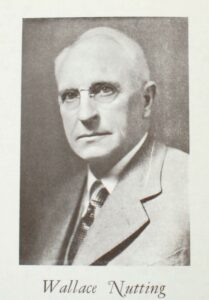 First, a little background on Dr. Nutting. Born in Massachusetts in 1861, his father died during the Civil War in 1864. He attended Exeter Academy and Harvard University, then the Hartford Theological Seminary, and then Union Theological Seminary, on his way to becoming an ordained Minister in 1889. Over the coming years, he served pastorates in four states before retiring from the ministry on a full-time basis around 1900 after a serious illness. As part of his recovery, Nutting’s part-time photography hobby soon transitioned into a full-time business. After opening a shop briefly in New York City in 1904, Nutting decided he needed the fresh air of the country and found the ideal setting for both his home and picture business in Southbury, Connecticut.

Nutting blossomed into America’s foremost photographer, and between 1900 and his death in 1941, he sold literally millions of hand-colored pictures. The bulk of Nutting’s photographic work was done throughout New England and his outdoor, or “exterior,” scenes are what most people associate with Nutting. They typically included pictures of apple blossoms, birches, country lanes, streams, rivers, ponds, lakes, and fall scenes, as he attempted to preserve the beauty of the rapidly changing American landscape for future generations. Nutting’s exterior scenes achieved such enormous popularity that hardly an American middle-class household was without one during 1910-1920. They were beautiful, inexpensive, and provided people with the opportunity to decorate the walls of their homes at a very affordable price.

With the Colonial Revival Movement at its peak, Nutting sought to capitalize on it through his Colonial interior photographs. The story has it that one rainy day when he was unable to photograph outside, Mrs. Nutting suggested that he take a more “personable” picture indoors. So he staged a room in his house, arranged the appropriate colonial setting, had an employee dress in period clothing, and took his first colonial scenes in kitchens, bedrooms, hallways, and of course, parlors. They caught on in popularity, sales increased, and he entered a new phase in his photography business.

Nuttinghame: In 1905 as he transitioned his photography business to Connecticut, Nutting purchased an old house which he humbly named Nuttinghame, and it was here that his hand-colored picture business, and his colonial interior pictures, began to take off. Nutting had photographic equipment, antique furniture, colonial backgrounds, and appropriate models needed to expand his photographic inventory. He also had the ability to market and sell his photos to the general public.

Nutting’s Southbury parlor scenes are easy to identify because most were taken in the same room and around the same fireplace. Titles such as The Maple Sugar Cupboard, A Sip of Tea, and A Bit of Sewing depicted the woman-of-the-house performing traditional chores such as cooking or sewing. Windsor chairs, rocking chairs, candlestands, and other antique furniture items were positioned around the hearth, on hooked rugs, in a traditional colonial setting.

Nutting continued to take his colonial photographs in Nuttingholme and continued to expand his photographic inventory to meet increasing public demand. And it was at this time, as his know-ledge of antiques grew, that he realized there wasn’t enough quality period antique furniture to be found. So he decided to reproduce it.

Over time Nutting became an author, lecturer, and authority on Early American furniture. Whether he purchased it himself or knew others who owned it, he developed the ability to identify which were good, better, or best. Nutting closely studied Antique furniture, starting with Windsor chairs and Pilgrim Century Furniture. He would literally take a fine antique apart, study what made it so special, and then had his factory craftsmen reproduced it, by hand where possible, as close to the original as possible, and then sell it to the public. Over the next 30-years, Nutting reproduced the finest in early American furniture, from Bowback Windsors to Goddard Highboys. He also authored the first comprehensive book on the American Windsor Chair (1917) and then published his Furniture of the Pilgrim Century (1921).

Wallace Nutting operated his Chain of Colonial Picture Houses from around 1915-1920. During this period, he purchased a series of five New England houses which he felt represented every early style of American architecture, and which offered the finest in dignity, beauty, and elegance. Each house was carefully restored while trying to remain as faithful to the original as possible. Once properly restored and furnished, he opened the houses to the public for a small fee.

Nutting claimed that he purchased these homes to portray an accurate picture of early American life, as well as to serve as a background for his colonial photographs. The Chain displayed nearly 200 Windsor chairs, along with hundreds of other quality Antiques, and he was able to photograph hundreds of backgrounds for his picture inventory. And he was never reluctant to substitute his reproductions for period furniture, where appropriate.

Broadhearth, The Saugus Iron Works House (137 Central St, Saugus Centre, MA): Built in 1646, the Saugus Iron Works was the first successful ironworks in the colonies and the first house that Nutting restored. Saugus pictures can often be identified by their Pilgrim Century appearance including wide walk-in fireplaces, Carver & Pilgrim chairs, early Windsor chairs, Cromwellian furniture, and writing arm Windsor chairs. The fireplace was adorned with cast iron and metal cookware, along with wooden plates and treenware were the dishwares of the day.

Hazen-Garrison House (8 Groveland St., Haverhill, MA): Built in 1690, this house was built to serve as a garrison house in times of attack by hostiles. The parlor had an 8-foot wide fireplace and furniture included Butterfly tables, settles, Jacobean furniture, heavy oak tables, chair tables, and candlestands. Utensils moved beyond treenware and consisted of Pewter, Silver, and Earthenware.

Hospitality Hall, Webb House (89 Main St., Wethersfield, CT): Built in 1752, the Webb House is known today as the “Webb-Deane-Stevens Museum”. Arguably this was the most historically important house in Connecticut because George Washington spent five days here while planning the Yorktown campaign in 1781. Yorktown Parlor displays colorful pictorial wallpaper, with period style furniture, including Chippendale pieces, Dutch chairs, Windsor chairs, settles, and braided rugs for most rooms. The Webb House was the southern-most house in the chain.

Wentworth-Gardner House (56 Gardner St., Portsmouth NH): Built in 1760, this house represented the perfect Georgian style home at the peak of the colonial period. Located on the Piscataqua River across from Kittery, Maine, the front door opened into possibly the finest colonial hall of the period. The home included ten rooms, four fireplaces, with a North and South parlor. Furniture included Gothic Chippendale chairs, triple-back settee, pie crust table, a corner cupboard, gateleg table, as well as some interesting china. The floors were adorned with both hooked and braided rugs, along with several Oriental rugs.

Financial success with the chain proved elusive, and by 1920 the final house had been sold. Although Nutting had closed his entire Colonial Chain, he continued taking his colonial photographs in the homes of dozens of friends and acquaintances.

Was Wallace Nutting successful in his quest to preserve Colonial American Parlor Life for future generations? Consider this.

So, was Wallace Nutting successful? His fans loved his work. His critics could always find fault with it. But more than 75 years after his death, we’re still talking about him … and his accomplishments. So I would say “Yes,” he did a great job of preserving Colonial America for future generations. Thank you, Dr. Nutting.

And what about the value of Wallace Nutting pictures today? Like many other areas of antiques & collectibles, there probably hasn’t been a better time to buy in the past twenty-five years. As collectors my age begin downsizing our collections, our children don’t seem to want as many as we did. Rarities can still cost $500-$1,000 and more. Common pictures can usually be had for less than $100.

My advice is the same as it’s always been: Buy the best that you can afford, don’t overpay, avoid damaged pictures, and buy them because you like them, not for investment

Mike Ivankovich is the country’s leading authority on Wallace Nutting and is the host of the What’s It Worth? Ask Mike the Appraiser Radio Show in Philadelphia. He can be reached at 215-264-4304 or by email at info@Michaelivankovich.com

Embellished for the Elements

The Parlor: An Island of Formality. You entered it only rarely, and you weren’t meant to be comfortable there. But every house had to have one, no matter how high the cost.