Ceramics, in its broadest term, defines the art of making any object from clay by baking it. Just as the term “vehicle” can mean car, airplane, or spaceship, the term “ceramics” includes a like number of variations, either in design or materials.
Basically, the chemical composition of china is a combination of clay, kaolin, feldspar, and quartz. Other materials may be added, depending on the relative quality of the raw materials available and the results the manufacturer wishes to achieve. After the purest of raw materials are mixed and prepared, the product is shaped and molded into the desired items and placed through a series of firings at extremely high temperatures and for long periods of time. The number of firings is often determined by the nature of the design sought. As with stoneware, the body becomes vitrified; which means the body fuses, becomes nonabsorbent, and very strong. Unlike stoneware, china becomes very white and translucent.
China vs. Porcelain
Many people are confused as to the difference between “china” and “porcelain.” Actually, the two terms describe the same product. The term “china” comes from its country of origin, and the word “porcelain” comes from the Latin word “porcella,” meaning seashell. It implies a product which is smooth, white, and lustrous. The term “porcelain” is preferred in Europe while “china” is favored in the United States. China is “at the top of the list” of ceramic products because of its delicate beauty, and the extreme care and skill taken to produce it. China is very delicate in appearance only, as it is known for its great strength and resistance to chipping, which results from a high firing temperature.
Bone China 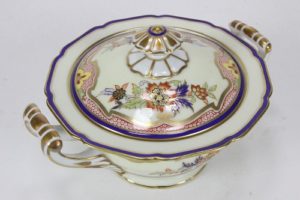 In making bone china, calcified bone is used as a refractory material and the firing temperature is lower. Bone china is usually thinner and the glaze is smoother than porcelain china. The glaze, however, is not as durable as porcelain china since it is softer. “Bone china” starts the same way as porcelain china but includes an extra ingredient, bone ash. This is a white powdery substance and the byproduct of incinerated animal bone. Bone ash gives the body of the plate a unique milky white color. Bone ash adds translucency to the body of the dinnerware, and makes the dish stronger by making it softer. It’s true! By making the dinnerware less brittle, the bone ash makes it more resilient and less likely to break.
Ivory China/Ivory Bone China
Ivory china and ivory bone china are the same as described above. The only difference is that an ivory coloring is added to the mixture.
Glossary

The Graphic Excitement of Mocha and Related Dipped Wares

One thought on “What is China?”