Pittsburgh Pirates fans have been through it. So have Baltimore Orioles fans and Detroit Tigers fans. But as difficult as the loss of historic ballparks has been in those cities, New Yorkers would say that all of them come in second behind the closing in 2008 of the facility located at East 161st St. and River Avenue in the Bronx: Yankee Stadium, often called “The House That Ruth Built” in honor of the ballplayer that many consider the greatest ever to swing a bat.

No other major league baseball team is close to the New York Yankees when it comes to the big prize: 27 World Series championships, with the St. Louis Cardinals a distant second with 11. All but 1 of those 27 titles came when the team called Yankee Stadium home from 1923 until 2008, a run of success that’s rivaled by few other teams in any major sport.

Although the stadium was completed and ready for action earlier in 1923, it seems like Opening Day that season—April 18—is the logical date to commemorate as the 100th anniversary of the legendary ballpark.

Opening Day didn’t come a moment too soon. For 10 years, the Yankees had played their home games at the Polo Grounds, which in itself would go on to become an iconic ballpark as it was the home of the rival National League team, the New York Giants. Whatever bloom there may have been in 1913 was definitely off the rose by 1922, with the Giants’ management pushing for the Yankees to find a new home.

“The Giants wanted to get rid of the Yankees because the Yankees started outdoing the Giants in attendance – especially because of Babe Ruth hitting all of those home runs,” explains Michael Wagner, author of the book Babe’s Place: The Lives of Yankee Stadium. “That’s what people wanted to see.”

Yankees management had hoped to build a new facility in the borough of Manhattan but found it prohibitively expensive. Land in the neighboring borough of the Bronx, across the Harlem River, was less costly and the Yankees were able to choose from a number of potential sites there. With subway service now running north into the Bronx, fans would be able to access the site fairly easily. These factors combined to make the Bronx the obvious choice for the team’s new home, and construction began in May 1922. “The site they chose actually had been a lumber yard, owned by the estate of William Waldorf Astor,” says Wagner.

Construction proceeded rapidly, with one of the materials suppliers, the Edison Portland Cement Company, providing the cement for the walls of the stadium. The company was owned by inventor Thomas Edison.

The stadium was built in 284 days, which was a month ahead of schedule. On April 18, 1923, the Yankees took the field for the first time and beat the visiting Boston Red Sox—a team with which the Yankees would later become great rivals—4 to 1. Babe Ruth, already recognized as one of the greats of the game, hit a three-run home run for the Yankees.

A Taste of Things to Come

That first game may have been a kind of good luck charm, as the Yankees went all the way that year, beating the New York Giants in six games for their first World Series victory. It was a measure of revenge for the Yankees as they’d lost the World Series in both 1921 and 1922 to … the Giants. It also was the beginning of a long series of great players and historic moments at Yankee stadium.

After losing the 1926 World Series to the St. Louis Cardinals, the Yankees came back the next year with a season for the ages. The 1927 Yankees were unstoppable, winning 110 of 155 regular season games and then rolling over the Pittsburgh Pirates in the World Series in a four-game sweep. Yankee legends Lou Gehrig and Babe Ruth led the charge along with fellow Hall of Famers like Tony Lazzeri, Earle Combs, and Herb Pennock. The team was so dominant that it became known as Murderers’ Row, an apt nickname given the way the Yankees killed opposing pitching; among other feats, Ruth set the single-season home run mark of 60 in 1927, a record that stood until 1961. Many consider the 1927 Yankees to be the greatest team in the history of major league baseball.

On July 4, 1939, the Yankees honored an ailing Lou Gehrig in a home plate ceremony at the stadium. After being diagnosed with ALS—the disease that would kill him less than two years later and become synonymous with his name—Gehrig had been forced to retire from baseball. He told an adoring crowd that day, “For the past two weeks you have been reading about a bad break. Yet today I consider myself the luckiest man on the face of the earth.”

History-making events continued to unfold at Yankee Stadium. On October 8, 1956, Yankee pitcher Don Larsen threw a perfect game—still the only perfect game in World Series history—against the Brooklyn Dodgers in game 5 of that year’s World Series. Larsen wasn’t a Hall of Fame-caliber pitcher, having a career record of 81 wins and 91 losses. But on that day, he was unhittable, leading the Yankees to another world championship under manager Casey Stengel.

And on October 17, 1998, in game 1 of the World Series, the Yankees’ Tino Martinez crushed a Mark Langston pitch into the upper deck of Yankee Stadium for a grand slam home run. The blast gave the Yankees a four-run lead and they went on to win game one and sweep the San Diego Padres in four straight. It was a fitting end to the Yankees’ historic season, in which they won a then-American League record 114 regular season games.

Following the end of the 1973 season, the Yankees closed Yankee Stadium for what turned out to be two years of much-needed renovation and repairs. The Yankees played the 1974 and 1975 seasons at Shea Stadium, alternating with their National League counterparts, the New York Mets, while the renovation work was carried out. “Parts of the stadium were falling apart, particularly some of the concrete structures,” says Michael Wagner. “And at the time, New York City was in decline, with crime being a big problem. Also, parking around Yankee Stadium was terrible. So all of those factors played a part in the decision to do renovation and repairs.”

More than 50 years of rough-and-tumble ballgames had taken its toll, and the stadium underwent a great deal of changes and improvements – work that had some fans wondering what their beloved Yankee Stadium would be like when it re-opened in April 1976. Wagner remembers, “Once the renovation was finished and they re-opened Yankee Stadium, I was concerned … I wondered, ‘Will I feel like it’s still Yankee Stadium? Will I feel at home?’ But when I entered the stadium for the first time after the work, I felt right at home. It was home!”

Now, fast-forward 33 years, through more than 3 decades of Yankees highs and lows, of World Series wins and near-misses, to September 21, 2008, when the Yankees played the last-ever game at the original Yankee Stadium, the organization having decided to shutter the grand old ballpark in favor of building a new facility across the parking lot. The Yankees beat the Baltimore Orioles 7-3 in that last game, and the stadium—the place that Gehrig and Ruth and DiMaggio and Mantle and Rivera and Jeter all had called home—then was closed down and eventually demolished. 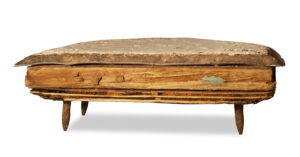 It’s one thing to collect baseball cards, game-day scorecards, and other mass-produced items that help fans to stay close to a game they love. But artifacts from a place like Yankee Stadium can take on a kind of mystical status for collectors, given that many of them are truly one-of-a-kind. In April 2021, California-based SCP Auctions sold the original home plate from Yankee Stadium for $303,277 – a remarkable result for the worn and battered “ground zero” for so many historic baseball moments, as it had been in place from 1923 until the stadium renovation began in 1974.

Other original Yankee Stadium artifacts are more affordable, including original seats. Post-renovation seats (after 1975) can go for less than $1,000, while unrestored seats from the 1920s-1930s often bring $2,000 and up. Surprisingly from our 2022 collector’s perspective, the Yankees teamed up in 1974 with discount department store Korvettes to sell individual original seats, salvaged during the stadium renovation, to the general public. The price? $7.50.

We’re fortunate that these pieces of The House That Ruth Built have been preserved for posterity. But the closing of Yankee Stadium in 2008 left a hole that, for some fans, still hasn’t been filled. “It was a big disappointment,” says Michael Wagner. “We lost a place where the baseball gods roamed.”

Douglas R. Kelly is the editor of Marine Technology magazine. His byline has appeared in Antiques Roadshow Insider, Back Issue, Diecast Collector, and Buildings magazines. He hopes one day to become the owner of a 1963 Topps baseball card of Coot Veal.