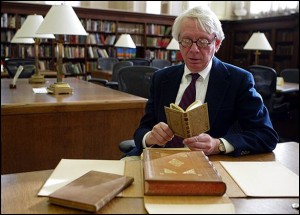 Here’s a true but slightly unsettling fact: the John Hay Library at Brown University in Providence, R.I., has three books in its collection that are bound in human skin: an anatomy text from 1568 and two 19th-century editions of “The Dance of Death,” a medieval morality tale. Sam Streit (shown), the library’s director, said the use of human leather as a binding material was often a “tie-in” with the book’s content. And, surprisingly enough, it wasn’t all that uncommon a practice.
According to researchers, binding a book with human skin was not unusual. Today, human leather can be found in the rare-book collections of some of the nation’s finest libraries. In centuries past, the best libraries belonged to private collectors. Some were doctors who had access to skin from amputated parts and unclaimed bodies. In other cases, wealthy book aficionados acquired skin from executed criminals and medical school cadavers. It’s a practice that, thankfully, is in the past.

Library of Congress Receives Donation of Popular Art from Geppi