On June 25, 2015, at 3 pm CET, the leading online auction house Auctionata presents a very special auction in cooperation with the Königliche Porzellan Manufaktur (KPM) Berlin: entitled “KPM Only”, the auction invites bidders into the production place of the oldest existing handcraft establishment in Berlin and will present 265 show-pieces and rare porcelains live in the historic kiln hall of KPM. The auction will be broadcasted from the KPM on www.auctionata.com using the innovative splitscreen technology, which enables bidders from all over the world to participate. The highlights include a diamond-studded pair of the two most expensive cups that KPM ever produced.
Founded by the King of Prussia Frederick the Great in 1763, the Königliche Porzellan Manufaktur Berlin (‘Royal porcelain manufacture Berlin’) stands for handcrafted luxury, style-defining design and perpetual values. Pertaining to a long tradition of exhibiting the best European craftsmanship, timeless and soughtafter porcelain is produced in the Berliner workshops, and have found their way into international design collections. Only the highest grade porcelain will earn the trademark of the cobalt blue scepter. Through the exclusive cooperation with Auctionata, traditional craftsmanship is paired with the most modern technologies.

Every important epoch of porcelain history is revisited in the curation and as such, the auction offers a unique overview of the rich history of KPM. The journey begins with a rare figure group “Spring and Autumn” from c. 1780-1800. It is a wonderful example of the early skills of the porcelain modelers and painters.
A further highlight is a large mantle clock with Weichmalerei of the porcelain painter Paul Schley, from around 1888-1900. Weichmalerei on porcelain is a special form of flower painting from Berlin; and due to its size and perfect composition the clock exhibits an extraordinary artistic achievement. 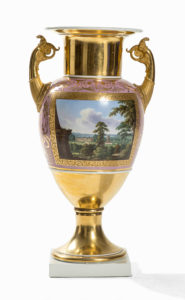 No less impressive is the ornamental vase crafted c. 1840 after the design of Karl Friedrich Schinkel (1781-1841), which depicts a painting by Carl Daniel Freydank of the Kronprinzenpalais in Berlin on the front side, and a painting of the Sanssouci Palais on the reverse. The Kronprinzenpalais was the former city residency of the KPM founder Frederick the Great and considered to be the first museum of contemporary art during 1919-1939 as the Nationalgalerie Berlin. In addition, a strictly limited Weimar vase from 18/19th century will be offered at the auction, which also depicts that legendary palace.
A lovely Art Nouveau work is a figure from Adolph Amberg’s wedding procession; a Chinese woman with a parrot. The wedding procession was created on the occasion of the wedding of prince Friedrich III and Duchess Cecilie of Mecklenburg-Schwerin and consequently crafted in 1914.

Furthermore, the auction will feature a pair of cups à la Greque with diamonds. They are absolutely unique and the most expensive cups ever produced by KPM. Each cup is decorated with a 0,75 carat diamond with a patented Spirit Sun cut. Bidding will start at 28,000 Euros.
The special auction format enables bidders from all over the world to gain an insight into the history of the oldest business in Berlin, using the most advanced technology. Whilst the objects will be presented live from the historic manufacturing site of KPM Berlin, the auctioneer will receive the bids and put down the hammer in the Auctionata studio. Enthusiasts of the ‘White Gold’ can bid in person on site, via www.auctionata.com or via the iPhone app Auctionata Live.

A livestream auction from the royal manufacturing grounds of KPM, June 25

Celebrating the Holidays with Judaica