By Jonathan Greenstein
The practice of Judaism commands a variety of ceremonies throughout the calendar year. Many of these rituals involve the performance of certain physical acts in conjunction with prayer. The majority of these revolve around the Jewish Sabbath which takes place from sunset Friday night to sunset Saturday night. The rest are performed on special holidays such as Chanukah and Passover or during life cycle events such as circumcisions and marriage. Some take place in the synagogue, but the majority of them are based in the home.
Each of these various ceremonies has traditional objects that are usually associated with them. For instance, in many Jewish homes the Sabbath is welcomed by reciting the prayer of the Kiddush which is iterated over wine in a special silver cup. On Saturday nights, we bid farewell to the Sabbath with the Havdalah ceremony in which, like Kiddush, we recite a prayer over wine in a special cup. In addition, another blessing is made over clove spices, usually housed in a special decorative container known as a spice tower, to mark the departure of the Sabbath. On Chanukah, we kindle the menorah, on Passover we use a Seder dish to hold the symbolic foods during the festive meal, and on Purim, where the Jews celebrate the anxious victory over evil in ancient Persia, we read the Megillah scroll. In Judaism there is a concept called hiddur mitzvah, which literally means “beautification of the mitzvah (ritual).” This concept encouraged the use of art to enhance the ritual objects used in the ceremonies previously described. The more common term for a Jewish ritual object is “Judaica.” Judaica can be any object that is used in a Jewish ritual, or can sometimes be a secular item that is decorated with Jewish motifs. 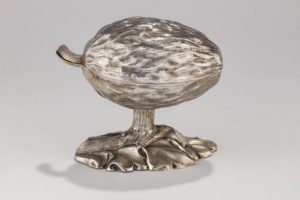 country’s only auction house specializing in antique Jewish Ritual art, known as Judaica. An expert in antique Judaica for over 30 years, Jonathan has been featured on CNN’s Situation Room with Wolf Blitzer, NBC News with Chuck Scarborough, The New York Times, The New Yorker, and many others. He is also the author of  “A Lost Art: Hand Made Silver Kiddush Cups of Eastern Europe,” and working on a second general textbook. He is currently starring in “Jewish Gilt with Jonathan Greenstein” on The Jewish Channel.


Celebrating the Holidays with Judaica

Getting, Giving and Glowing with Vintage at the Holidays

Bringing Nature Into Your Home With Art, Antiques, and Design