Ken’s Korner: Hall of Fame will ask for Barry Bonds items – The Journal of Antiques and Collectibles – June 2006 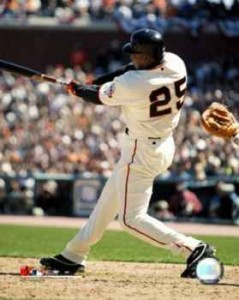 Barry Bonds isn’t the most popular man in baseball, what with rumors of steroid abuse constantly being hurled his way, but that hasn’t stopped the National Baseball Hall of Fame from laying plans to acquire his artifacts. The Hall said it will request the bat, uniform and, if possible, the baseballs from his 714th and 715th home runs (tying and placing him ahead of Babe Ruth on the all-time list). They’ll make the same request as Bonds approaches Henry Aaron’s record of 755 home runs.
The Hall of Fame has no memorabilia from any of Bonds’ home runs since acquiring the ball from his 532nd home run. It does have artifacts from the home run race in 1998, when Mark McGwire and Sammy Sosa each chased and broke Roger Maris’ record of 61 homers. Bonds set the single-season record three years later, with 73 home runs, but he did not provide the Hall of Fame with any memorabilia. In the years since, steroid abuse has tainted the game of baseball.
[amazon_carousel widget_type=”SearchAndAdd” width=”550″ height=”200″ title=”More on Barry Bonds:” market_place=”US” shuffle_products=”False” show_border=”False” keywords=”Barry Bonds” browse_node=”” search_index=”Books” /]