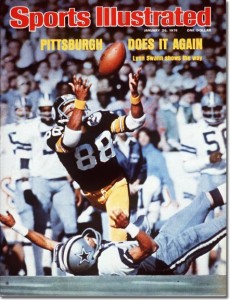 Former National Football League great Lynn Swann is running for the governorship of Pennsylvania as a Republican, but already he’s learning that life as a politician is constantly under a microscope. Case in point: Swann’s online business — LynnSwann.com — in which he sells autographed footballs, photos and other memorabilia, is under investigation by the state’s Department of Revenue. At issue is whether the state should be collecting sales tax on the items he sells online.
No one is accusing Swann of dodging the taxman, like he dodged defenders during a stellar career with the Pittsburgh Steelers. It’s just that he’s in a business — online merchandising — that has murky rules that often change from jurisdiction to jurisdiction. It’s the new economy, and state governments are still trying to figure out how to get their piece of a growing pie. Prices for Swann’s items: autographed footballs $200; autographed mini-helmets $125; and signed photos, up to $150.
[amazon_carousel widget_type=”SearchAndAdd” width=”550″ height=”200″ title=”More on Lynn Swann:” market_place=”US” shuffle_products=”False” show_border=”False” keywords=”Lynn Swann” browse_node=”” search_index=”Books” /]