Ken’s Korner
New and Views from the World of Antiquing and Collecting
by Ken Hall
Two years ago a West Virginia woman walked into a local flea market and paid $7 for a painting because she liked the frame. It turned out to be an original work by renowned French Impressionist Pierre-Auguste Renoir that had been out of circulation and unaccounted for since 1926. The woman, who wished not to be identified, nearly tossed the painting to keep the frame, but on a hunch took it to the Potomack Company auction house to have it evaluated. There, she was told the painting was indeed an original by Renoir. 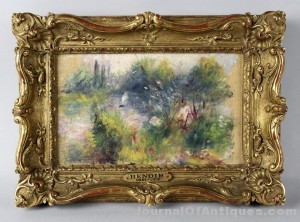 But now it has been determined that the painting may have been stolen from a museum around 60 years ago, and the planned sale of the work – through Potomack – is on hold. It seems that a reporter discovered documents in the library of the Baltimore Museum of Art, showing the painting had been on loan there from 1937-1951, when it was stolen. Officials notified the FBI, which is investigating. The documents show the painting was on loan to the BMA by its owner, Saidie May, and was reported stolen (but not to police) in November 1951.