News & Views From the World of Antiques & Collectibles
By Ken Hall
The whole story just sounded like a fairy tale, something you wish would happen to you. Woman walks into flea market in Harpers Ferry, Va., and buys a painting with a nameplate right on the frame that says “Renoir.” Woman pays $7 for the painting, figures it’s a reproduction, brings it home and puts it into a plastic trash bag, where it sits for two years. Woman, suddenly curious about the painting, goes to an appraiser who tells her it’s a genuine Renoir (albeit a small one, painted on a napkin) and says it’s worth $22,000. 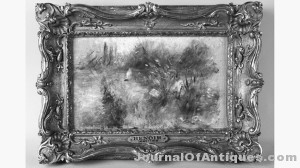 It gets better. The woman — Marcia “Martha” Fuqua, of Lovettsville, Va., — consigns the painting to an auction house, which tells her it will probably fetch $75,000. But that’s where the good news ends. The auction was halted when it was learned that the Baltimore Museum of Art reported the painting stolen back in 1951. Also, a man identifying himself as Fuqua’s brother reportedly told the media the painting has been in the family for 50 or 60 years and that Fuqua’s mother had ties to the Baltimore art community in the ‘50s.