James D. Julia, Inc., the world’s leading firearms auctioneer, will conduct their Fall Firearms Auction on October 5th-7th with a preview on October 1st and 2nd. The first session on October 5th will be the inaugural Sporting and Collector Firearms auction and will include over 730 fine and outstanding firearms in the more affordable range of $2,000-$8,000. For years, Julia’s has distinguished itself as selling more high-end, expensive, rare firearms than any other firearms auction house on Earth.  Now with the new Sporting & Collector Session which begins on October 5th, our sales will also include more affordable firearms.  Julia’s has also distinguished themselves as selling more high-end, iconic collections than any other auction house and their 3-day Fall extravaganza tops all the previous; representing at least 18 major collectors and collections. 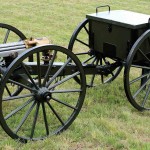 The October 5th sale is very strong in quality sporting arms.  A beautiful Parker VE Grade is estimated at $12,500-17,500.  A fine Remington 1100 Grade F Four Skeet Set carries an estimate of $8,000-12,000; and an A.H. Fox AE Grade 16 ga. Special is estimated at $8,000-12,000.  A gorgeous High Art Ithaca Dollar Grade Knick Model Single Barrel Trap gun is one of the many superb Trapguns to be offered in this session.  This one carries a presale estimate of $6,000-10,000.  Fine international shotguns and double rifles will also be strongly represented in this sale including a custom Gold Inlaid Krieghoff Model 32 estimated at $10,000-20,000.
The first session will feature a number of items from the Phil A. Bleakney Estate Collection including Winchester, Colt, and Civil War items.  A group of exceptional Civil War carbines includes a Minty Green Breech Loading Carbine estimated at $4,000-6,000.  A private single owner collection of Colt Semi-Automatic Pistols include a very rare 1907 US Army Test Pistol estimated at $10,000-15,000.  The Rod Fuller Estate Collection of High Grade Brownings will be strongly featured together with the William Henkel Collection of Winchester Mod 70’s and a portion of the superb Robert Burg Collection of Outstanding Sporting Arms.  Various Winchesters will include a very fine Model 1894, estimated at $7,000-11,000, and an extraordinarily fine Model 42 Gold Inlaid Walter Kolouch engraved 410 ga. shotgun, lot #1457, estimated at $7,500-10,000.  Another important engraved Henry rifle includes history of having been owned by Civil War General McCook and was later gifted to King Kalakaua of Hawaii and later to Princess Kawananakoa. This terrific gun from the Land of Pineapples is estimated at $150,000-250,000.
The second session of the auction begins Tuesday, October 6th and concludes on Wednesday, October 7th.  This 2-day session will feature the rare, expensive, and historically important guns Julia’s has come to be known for.  This two day event features selections from some of the finest collections and estates on the planet, including the Estate collection of William West of Big Bore Double Rifles, The Estate Collection of Noted Author/Scholar Larry Baer together with rare Sporting guns from the Bura Collection and the Fuller Collection, an Important Private Collection of High Quality Marlins, and many others.  The remarkable items on offer from these collections and this overall event are certain to attract the attention of collectors, historians, and museums, and will again help to cement Julia’s position as the leading fine firearms auction house in the world.
The first day of the Extraordinary Firearms auction includes a spectacular assembly of sporting arms. Two Fabbri Titanium Action Pinless Sidelock Ejector Single Trigger O/U Game or Pigeon Guns are each estimated at $100,000-150,000; a Stunning Custom Ordered Pair of Grifnee Engraved Holland and Holland Royal Deluxe Sidelocks are estimated at $85,000-125,000; and a Sublime Masterpiece of Functional Sporting Art, the Exceptional Ken Hunt Relief Sculpted James Purdey .410 Sidelock Ejector is estimated at $80,000-120,000.
This Extraordinary Firearms auction has probably the largest selection of high grade Brownings to come to auction ever! Over 100 fine examples from this important manufacturer are represented.  Many are from the exceptional Rod Fuller estate – all are remarkable in their own ways.  Highlights include an Extraordinary Original Two Millionth Browning Auto-5 Presentation  at $65,000-95,000; a 20 Gauge Browning Diana Grade Superposed Three Barrel Set Engraved By Dewil estimated at $12,500-17,500; and an Early .410 Gauge Browning Diana Grade Superposed Engraved By Watrin, estimated at $7,500-12,500.
There’s certain to be huge interest in this auction’s fine collection of large sporting and big bore rifles.  It’s impossible not to notice a Humongous Holland and Holland Four Bore Double Elephant Rifle in outstanding condition.  This extremely rare firearm is estimated at $60,000-90,000.  Other highlights include an Incredible Golden Age Holland and Holland Royal Deluxe Hammerless Ejector Double Rifle in .577 Nitro Express, Most Likely Made For His Highness Sir Rana Ranjit Singhji Of the State Of Barwani (estimated at $60,000-100,000;) a Royal Hammerless Dangerous Game Double Rifle (estimated at $45,000-65,000;) a Fine Holland and Holland 8 Bore Ball and Shot Double Hammer Gun, (estimated at $70,000-90,000) and more. 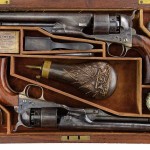