Fairfield, ME ~ August 25-28, 2015. It’s the event that collectors and connoisseurs have waited all season for – James D. Julia’s annual August Fine Arts, Asian, & Antiques auction!  James D. Julia Auctioneers, led by President and long-time industry leader Jim Julia, has been in business for almost five decades.  This $6 million dollar summer sale, now in its 35th year, is a signature event for the company and is one of the largest summer auctions in North America. This 2,500 lot event is so large in scope and quality that it has been extended from three days to four; it promises to offer an astonishing array of world class fine and decorative arts, antiques, folk art, Asian articles, historical items and archives, and a few breathtaking surprises as well.
This can’t miss event features many one-of-a-kind, rare, and museum quality items from collections and estates from every corner of the planet.  Highlights include the Rodney G. Fuller collection of Native American artifacts from western Nebraska, the John W. Armiger Jr. collection of early American flags and political ephemera from Baltimore, Maryland; the Michael Urioste estate collection of fine antiques from Gadsden, Alabama; and the third installment of precious and rare Asian items from the Estate Collection of a Renowned Taiwanese Diplomatic Family (Cai Wanjun, Xu Shaochang, & Ye Gongchao).  This auction also offers many top-calibre items from private estates and collections from both here and abroad.
Day one hits the ground running with 450 lots of remarkable paintings and sculpture.  About 300 different artists are represented overall.  Can’t miss works on canvas include a gorgeous Gloucester Doorway painting with provenance by Maine artist Abbott Fuller Graves (estimated at $20,000-40,000;) “Rockport, Mass. 1936 No. 3” by Cape Ann School Artist William Glackens (estimated at $175,000-250,000;) “Der Menschen Frosser” by German artist Friedrich Wilhelm Kuhnert (estimated at $150,000-200,000;) and approximately 25 paintings by Waldo Peirce – sometimes referred to as “the American Renoir” – acquired directly from the artist’s daughter.
Fine bronzes also play a heavy role in the auction’s debut day.  Julia’s is honored to offer Edgar Degas’ masterpiece – “Danseuse Agrafant L’epaullette De Son Corsage” (#64D). This bronze was gifted to and descended thru our consignor’s family from Justin Thannhauser, the influential German art dealer.  To our knowledge, this bronze has never previously been offered at auction.  It is estimated at $150,000-250,000.  Other highlights include leading wildlife artist Carl Rungius’ “Big Horn Ram,” accompanied with full documentation and provenance (estimated at $125,000-175,000) and American sculptor Paul Manship’s extraordinary “Adjutant Stork,” estimated at $30,000-50,000.  Overall, about 30 bronze artists are represented in Julia’s summer sales event, including outstanding examples from Demetre Chiparus, Georg Kolbe, and Jud Hartmann.
Auction days two and three feature over 1,300 lots fine antiques, furniture, and accessories at center stage.   There is truly something for everyone amongst these carefully curated and fully cataloged selections.
Looking to feather your nest with the most desirable antique clocks, furniture, lighting, rugs, folk art, and accessories?  This auction offers a fantastic array of decorative and functional items for your summer cottage, winter palace, or both!
This event features almost a dozen important clocks; two of the finest include a Chippendale block-and-shell carved Goddard Townsend mahogany tall case clock by Thomas Claggert (estimated at $70,000-150,000) and a Classical Revival carved mahogany tall case clock, with a movement By Walter Durfee (estimated at $5,500-7,500.)
Antique furniture highlights include a magnificent Chippendale cherry highboy from a private Maine home (estimated at $10,000-15,000) and a Chippendale cherry secretary bookcase (estimated at $5,000-7,000.) Painted furniture is also well represented in this sale. Highlights to please every “palette“ include a finely painted decorated dowry chest, a stepback grain painted dish cupboard, and an absolutely charming hand decorated antique Ohio pie safe.  And, for clients interested in more contemporary furniture, this sale will not disappoint with a selection of George Nakashima furniture, including a freeform coffee table (estimated at $8,000-10,000) and a matching set of six chairs and a dining table with ties to the prominent Asian art dealer Alice Bonney (estimated at $8,000-12,000.) 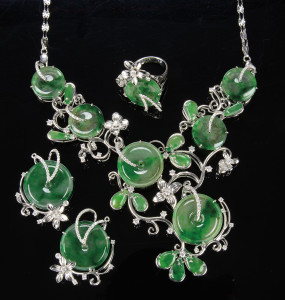 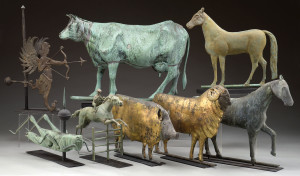 Good things come to those who wait, and Julia’s selection of decorative jades, porcelains, Peking glass, and cloissone objects offered on the final day of this sale are second to none.  Jade selections include many small collectible pendants, pebbles, and snuff bottles; a large white He Tian jade pendant estimated at $35,000-50,000; a group of carvings from a South Carolina private collection; and several offerings of Guan Yin diamond encrusted jewelry.  Porcelain offerings run the full gamut of domestic, ceremonial, and ritual items dating from the Ming Dynasty thorugh the Republican period and 20th century, with a highlight most certainly being a large painted famile rose censer with raised handles.  This big beauty is estimated at $30,000-50,000. This sales event offers several lovely examples of jewel toned Peking glass, including vases and bowls in both monochrome solid and multihued carved forms.  Cloissone highlights include a spectular selection of obelisks, table screens, braziers, censers, cups, vases, and kus.  A five-piece cloisonné enameled garniture set, estimated at $16,000-30,000 is certain to catch the eye of the most discerning collectors.
Bronzes and Chinese trade selections represent the last, but hardly least, of the wonderful Asian lots in this sale.   This event offers collectors a large variety of bronze censors, Buddhas, vases, and other traditional and ritual items.  All eyes will be on a few key important Buddhist and Tibetan figures, like the seated figure of Tsougkhapa (estimated at $16,000-$20,000,) gilt bronze standing Tara (estimated at $30,000-$50,000,) lotus stand (estimated at $160,000-$180,000,) and gilt bronze Vajrapani (estimated at $15,000-$25,000.) Chinese trade highlights include portrait of a Hong Merchant of the 3rd rank, several reverse paintings on glass, a large Canton porcelain footbath, and a very fine decorated Chinosorie sewing table.
More information on James D. Julia’s outstanding four day August Summer Fine Arts, Asian, & Antiques auction can be found at www.jamesdjulia.com or calling 207-453-7125.  Department Head Tony Greist and Assistant Department Head Katya Tilton welcome your questions and inquiries. They can be reached at tgreist@jamesdjulia.com and ktilton@jamesdjulia.com respectively.  This auction is fully documented in two lavish, full-color, detailed, and illustrated catalogs; they are available for $40 each. This event will host its preview on August 24th, 2015 from 9am-5pm.  The actual auction will be held on August 25th, 26th, 27th, and 28th and will begin at 10am sharp each day at Julia’s auction facilities  at 203 Rt. 201 in Fairfield, Maine.  We hope to see you there!