When it comes to kitchen collectibles, some of the most fun to collect are potholders (pot holders), hot pads, and trivets. In this issue, let’s take a peek at how they have changed over the years, why people collect them, and what kinds are available today.
Collecting Potholders
Prior to the Industrial Revolution, potholders as we know them today didn’t really exist. That’s because most of them are made out of cotton, yarn, or some other form of fabric or textile. Many years ago textiles were not as easy to come by. There were early devices that could be used to move hot materials without getting burned, but they were very different from the potholders we have now.
When access to a broad spectrum of textiles started to become more common, potholders did as well. At first they were practical devices made just to keep people from burning their hands when carrying hot items, but soon they became more like works of art, which people proudly display in their kitchens and dining rooms to this day. 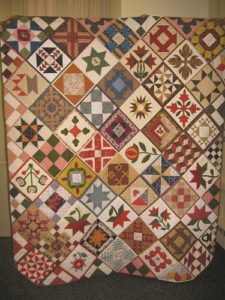 Some potholders are made on looms, and they are generally either square or round. However, many people liked to crochet potholders without the use of looms, which allows them to be much more artistic in shape, style and color such as strawberries, flowers, stars and more. Prior to the use of looms, crocheted potholders had some very unique shapes and patterns. Many still enjoy making potholders in those vintage styles today.
Vintage dress-shaped potholders are among the most collectible of those free-form potholders from the past. They first became popular during World War II. The men were off fighting in the war, and women needed something to do to pass the time. They also wanted to do their best to make their homes look good, even with their limited wartime resources. The result was that they made many potholders and other items for the kitchen. The dress pattern became popular very quickly because it was both interesting looking and easy to make. As the dress pattern was popularized, more and more variations popped up. Some of them had shorter sleeves than others, for instance. Also, the color patterns varied greatly. Some women even made potholders that were simply shaped like skirts, rather than full dresses.
Trivets Versus Hot Pads
Before collecting trivets or hot pads, it’s important to know the difference between them. A hot pad is often made of cloth or yarn, and it’s only designed to provide a slight barrier between a surface and a warm dish. Trivets, on the other hand, are generally much sturdier. They tend to be made out of either ceramic tiles or metal (usually cast iron).
The History of Trivets
Like potholders, hot pads made of yarn or stuffed fabric didn’t really become practical or popular until textiles were more readily available. Nevertheless, they have developed into more than just practical kitchen items. Many of them are works of art. They can have embroidered pictures on them, or even be crocheted into animal shapes. So, if you’re trying to decorate your kitchen based on a theme, you can easily find hot pads that fit right in with your plan. 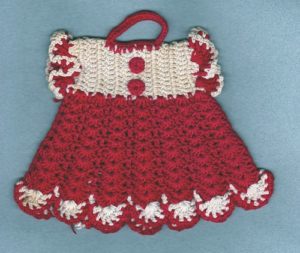 As for trivets, many of the earliest versions were made out of bent metal. They were definitely designed for practical purposes at first, not as art. For example, in the 1700s, revolving down-hearth trivets were often used. Food was cooked over low fireplaces, and people needed a way to take the food off the fire without burning their hands. The solution was a down-hearth trivet, which was essentially a metal ring with three feet that allowed it to sit securely with a pot or pan on it during the cooking process. Such trivets also had long handles, which often had hooks on the end. That way they could be hung up in some out of the way place when not in use. Many of today’s trivet collectors love them because they can easily be hung up as decorative pieces in kitchens or other areas, even though they aren’t always as practical to use as they once were. Early down-hearth trivets quickly evolved to include scroll work or artistic patterns. Many of them also had a grid or series of cross bars to give pots and pans more support during cooking.
As the way in which people cooked meals evolved, so did trivets. Eventually the metal versions were made in all sorts of shapes and sizes, including figural trivets. One of the most popular designs today is the owl shaped metal trivet. Trivet makers also began to produce a lot of trivets that didn’t have handles. They were designed to be placed on tables, as opposed to being stuck into open fires. With that movement came trivets made out of other materials besides metal. Tile trivets were very popular and didn’t require feet like metal trivets because they were easily able to insulate the table or other surface from the heat of the dish.
Many companies, such as Pfaltzgraff and Homer Laughlin, produced tile trivets that matched their dinnerware sets. Other makers produced tile trivets with very unique and intricate designs, including elaborate outdoor scenes, people, animals, and flowers. In more recent years, tile trivets have also included words. Some of them have sayings like “Home Sweet Home” and others have even advertised companies or places. For example, some people collect trivets from around the 1970s and onward that advertise each of 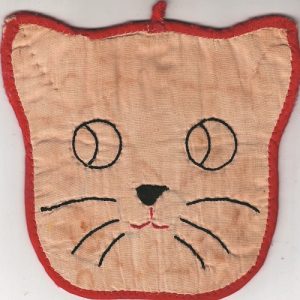 the fifty states.
Collecting Potholders, Hot Pads, and Trivets Today
There is no wrong way to collect these fantastic kitchen items today. All you have to do is decide what appeals to you and then make an effort to find it. You can collect trivets made in a particular time period, made by a certain company, or that fit a certain artistic theme that you like. But do keep in mind that potholders and hot pads produced today are made in both modern and vintage styles. So, you might have to look a little harder if you want to verify that you are buying items that are truly vintage.
Jessica Kosinski has been a freelance writer specializing in writing short articles for 15 years. She is also an avid collector of both antique books and Star Wars memorabilia. Although she is not in the antiques industry professionally, she has learned a lot about antiques over the years by periodically helping out at her mom’s antiques shop in Greenville, NH.
She currently balances maintaining the antiques shop’s Facebook page, www.facebook.com/MallofNE, and working on various freelance writing assignments. She can be reached at dementorskiss77@yahoo.com.