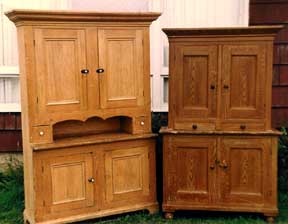 The cupboard on the left has been stripped. Such cupboards were difficult to sell in New England 20 years ago. The cupboard on the right is out of proportions. It is too wide for its height. It is grain-painted pine and has round Empire Style feet. I was not able to sell these cupboards at Brimfield or any other New England show. I did sell both in Florida for twice the amount I had asked in New England. Although I sold each cupboard for more money than I paid, I lost money. I had them in stock too long, hauled them to too many shows, and did not make enough mark-up to cover all my overhead expenses. They are classic examples of the types of antiques that dealers should not buy. 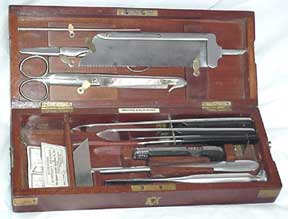 Post mortem surgical kit in a mahogany case. In the medical trade, kits such as this one are considered low-end merchandise. They sell between $500 and $1,200. I have bought and sold nine such kits in the last four years. At the height of eBay, post mortem kits sold for as much as $2,100. Today they bring around $700 at Internet auction. However, post mortem kits sell between $900 and $1,200 at major antique shows.

The Business of Managing Vendors

Who Wins and Who Loses as Antiques go to Cyberspace