“At eBay Prices” – Business of Doing Business – The Journal of Antiques and Collectibles –
By Ed Welch
The term “at eBay prices” has become synonymous with the term “discount retailing.” Discount retailing works well for large retail sellers, like Wal-Mart, because they can order a huge supply of popular items at a lower price to meet the demands of their customers. Discount retailing does not work for antique and art businesses, where the supply of merchandise is almost always limited. Generally speaking, antique dealers cannot sell at a low price and expect to make money with volume.
But the term “at eBay prices” belies that fact. An Aug. 6 article by Kevin Manley in USA Today details how AT&T, Verizon Communications, and SBC Communications – known as the Big Three – want MCI (now in bankruptcy) removed completely as a provider of telephone and telecommunication services. The article states that the Big Three are after MCI for two reasons. First, there will be one less competitor in the telecommunications marketplace. Second, MCI’s valuable assets can be bought by the Big Three “at eBay prices.” When major corporations and market analyzers deem “eBay prices” to be synonymous with “cheap” and “bargain basement” rates, a small business owner should take notice.
Evidence shows that the term is well-founded. Tias.com, a company that provides electronic storefronts (eStores) and an interface for their users to sell on eBay, analyzed 18,000 items sold by their clients with the on-line auction house. The study revealed that eBay prices were down 39 percent compared to the previous year. At the same time, the number of items posted by their members had increased 63 percent. The study showed that their dealers worked much harder finding, cleaning, posting, and shipping items sold on eBay. And, they were doing all this work for much less money. (More about this study is available at Tias.com and Auctionbytes.com.)
At one time, I sold thousands of items on eBay for reasonable and, every now and then, extremely high prices. I still sell on eBay, but only low-end items. For example, I recently purchased 5,000 books for $800 (16 cents each). I posted these books on eBay with no reserve and a starting price of $4. My overhead was about 30 cents each. About half of the books sold. Of that half, about 80 percent sold for the starting bid of $4. The other 20 percent brought between $10 and $60 each. The other half of the books that did not sell on eBay were put on the market at several local auctions. The average selling price was $1 per book.
A quick review of my expenses and income is revealing. My costs included : the purchase price (16 cents), eBay sellers fee (30 cents), local auctions sellers fee (20 cents), and state and federal income taxes (11 cents). My 16-cent book, having failed to sell on eBay, now cost me 77 cents. Therefore, I made 23 cents for each book sold at local auction while making much more per book on eBay. Obviously, for this low-end lot of books, eBay is a much better marketplace.
Let’s take another case in point. As an experiment for this article, I sold on eBay a pair of Windsor-style gold-filled eyeglasses that I had purchased at Brimfield for $35. The eyeglasses were old warehouse stock from the 1920s and were never used. They still retained their original identification and price sticker. Six people placed bids on these eyeglasses, and they sold for $20.50. I specialize in antique and vintage eyeglasses and have nearly 20,000 pair in stock. I commonly sell Windsor style eyeglasses between $65 and $85 each. The eBay buyer got a real bargain. 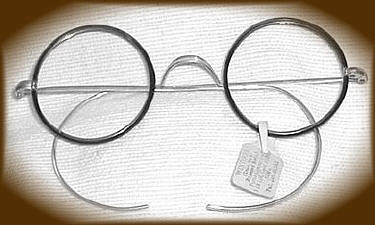