Rules-Based Verses Face-to-Face Selling – Business of Doing Business – The Journal of Antiques and Collectibles – October 2004
By Ed Welch
All antiques and collectibles bought, sold, and traded in the antique marketplace can be pigeonholed in one of two categories, rules-based merchandise and face-to-face merchandise.
Rules-based merchandise includes all mass-produced collectibles and all signed art and other antiques that are easy to categorize. Depression Glass is a prime example of a rules-based collectible. So much is known about this item that knowledgeable buyers and sellers have access to all available information pertaining to the rareness, salability, and value. The seller does not have to sell this item. All that is necessary to make a sale is that the seller asks a price that is perceived to be the going price.
Depression Glass is an ideal collectible to sell in a group shop. Any sales clerk can handle the actual selling process, taking payment and writing a sales receipt. It is not necessary for the sales clerk to know anything about Depression Glass.
The basic rules for selling rules-based items are: 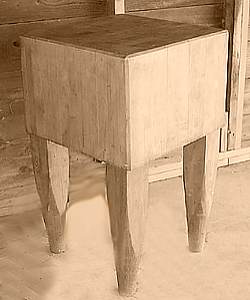 Butcher block No. 19 remains in my warehouse, unsold, because I violated one of the rules of butcher block selling when I offered this item for sale seven years ago. Butcher blocks are a rules-based item. To successfully sell this item, a dealer must follow all the rules that govern the sale of butcher blocks.
When I bought block number 19, I decided to increase the price to $450.00. I offered this block for sale at more than ten shows. No one would pay the $450.00 asking price. I was offered $350.00 several times. The butcher block now sits in my warehouse. It has been in my warehouse for seven years.
The reason that I still own this block is that I violated one of the rules that govern the sale of butcher blocks. I violated the price rule. Had I violated one of the other rules, height, smooth top, cleanliness and finish, the no sale result would be the same.
Of course, I could lower the price to $350.00 and sell this butcher block at my next show. However, I sort of like looking at this item. It is a constant reminder that mass-produced collectibles are best sold using a rules-based formula. The task of the dealer is to find out what the rules are and then follow those rules.
Butcher blocks, priced at $350.00 that have a smooth top and proper height, are an ideal item to sell in group shops. If all the rules of butcher block selling are followed, no face-to-face contact is needed. The block will sell itself.
For years, I called the selling of mass-produced items “Formula Selling.” Find the formula that works for a given item then stick to that formula. A woman dealer with whom I do much business calls the procedure the “Cake Bake” method. Gather all the ingredients needed to make a cake, blend according to the receipt and bake. The cake will come out excellent every time unless you fail to follow the recipe. Leave out or change one step and the cake is ruined.
Economists call the procedure “Rules-Based” which is a much better description of the selling process.
Fortunately, much of the merchandise in the antique marketplace can be sold using the rules-based method. Thousands of books have been published on individual items and groups of items. There is no shortage of information on any mass-produced item. By reading a few books and visiting a few shows, shops, and auctions, any person can learn the rules that govern the sale of any item.
I deal in antiques and certain collectibles that require face-to-face selling. I carry both expensive high-end examples and cheap low-end examples. Regardless of price, these items require face-to-face selling. I do not offer these items on my website or place then in local or Internet auctions.
I also deal in a collectible that is a rules-based item. I sell this item on two websites, at Internet auctions, and at local auctions. I do not bring my rules-based collectibles to shows. The exception is a few examples that are harder to find than normal. I can sell such items for slightly more money in person.
My reasoning for not mixing rules-based and face–to-face items is that rules-based collectibles sell themselves if I follow all the rules. Not having rules-based items at a show allows me more time to concentrate on items that need my personal attention to sell.