Looking into the Colorful Past of Stained Glass Art

Stirring scenes, epiphanies of light, color and symbolism, glowing recreations of nature – you may connect all these ideas with the artistry of stained glass, but what about urine? Wine? Terms like “cames,” “grozing,” or “armatures?” We know stained glass today as an adornment in cathedrals and Victorian homes. Alternatively, we may know stained glass through the work of Louis Comfort Tiffany. What about the technical magic that brought all this beauty to life? Let’s break apart the layers and better understand this magical glass and its artisans through the years.

Moving from Bottles to Windows

While colored glass items came long before stained, decorated glass was applied to windows, we suspect that a sort of stained glass window was first used by wealthy Romans in the first century AD and in some very early Middle Eastern palaces and mosques. Scholars have uncovered recognizable pieces from St. Paul’s Monastery in Jarrow, England from 686 AD, and have found pictorial stained glass (the head of Christ) from the 10th century at Lorsch Abbey in Germany. Germany also holds the title for the oldest complete stained glass window installation, in the Augsburg Cathedral, dating back to the late 11th century.

Stained glass reached its first heyday in Middle Age churches. The colored glass was ideally suited for windows as it was best showcased in shining light and at houses of God; beautifying cathedrals in the Middle Ages was a reverential act. Abbot Suger of St. Denis, an advisor to kings and early patron of gothic architecture, famously used stained glass in his abbey to serve several functions and this window style only increased in popularity. The towering, delicate windows let light into the darkness of Romanesque buildings and filled worshippers with reverence. For the Abbot, the light streaming in was a manifestation of God himself. The windows were also educational; churchgoers could view Bible scenes played out through the decorative windows. As they grew in size, scope, and popularity, wealthy donors and worker’s guilds also commissioned stained glass windows. Often, these commissioners added themes and symbols in addition to the traditional Bible scenes as a little early advertising.

In an earlier article on glass chemistry, we discussed how different chemicals were added to a sand and potash (potash, wood ash) mixture to make colored glass. Stained glassworks in a similar way and medieval craftsman perfected the art form. To create a window, artisans would first construct a template based on the size and shape of the window and map out their desired decoration. They would then create and flatten the different colors of pliable glass into sheets before selecting the sections for various parts of the design. From there, the pieces were cut by pressing the heated tip of a dividing iron along the outside of the pattern and breaking the glass into rough shapes. The pieces were then grozed into shape or trimmed with a special pair of pliers. The “grozing iron” or “groziers” had serrated jaws, sometimes one flat and one curved, giving the broken glass a more manageable edge.

Artisans would next paint brown or black details using a special paint. This paint was mixed from ground iron, copper, or glass bits suspended in urine, wine or vinegar. The painted pieces would go straight to a kiln, where the suspended glass mixture melted and fused with the sheet below. If the artist wanted to add depth or further detail, they varied the layers and location of their paint. Bold details worked best on the glass front that would be facing the building interior, while shading or depth could be added by painting on the back or exterior facing side.

Once the glass pieces were cut and decorated, they were fitted into pieces of lead called “cames,” which would be soldered to give the structure strength and stability. Lead was ideal for this type of work because it had the flexibility needed to fit between a variety of shapes but once soldered, was sturdy enough to hold the pattern in place. If the artisan was working on a stained glass window, they finished their work by placing it into an iron frame called an “armature” and then could proceed to mounting it in a wall. 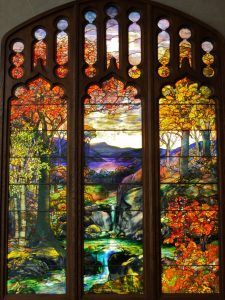 After a bountiful early period, stained glass rose again in the mid-19th century with the resurgence of Gothic architecture. Artists picked up where medieval makers left off and worked to learn their carefully honed techniques, with a little flair all their own. E. S. Prior, Louis Comfort Tiffany, John La Farge, Frank Lloyd Wright, Piet Mondrian, and Marc Chagall modernized the stained glass window with new styles and alternative shapes. Stained glass also flourished outside windows, and the Tiffany factory still painstakingly creates lamps in the same method as their namesake.

An exhibit from the Neustadt Collection of Tiffany Glass in New York called Tiffany Glass: Painting with Color and Light is traveling around the museum circuit and demonstrates through educational displays the process of making a Tiffany lamp. As with our medieval windows, the shade is first sketched and then recreated on a 3D plaster mold. After receiving the ok from Tiffany, the design was transferred onto a wooden mold and then patterns for the individual glass pieces were created on paper or brass. Each colorful piece came from a larger sheet of glass filled with color striations, variations, and unique markings, so a glass selector would find the perfect spot to cut for each detail. The pieces got cut, smoothed, and wrapped in slightly overlapping copper before being placed on the wood mold to be soldered into a stable shape. The shade could now be removed from the mold and the copper soldered from the inside before being fitted with a rim.

Tiffany and other modern stained glass artisans use opalescent glass, rippled or ridged glass, confetti glass, and translucent or shaded glass to create their art. Sometimes modern makers even incorporate beads or blown glass discs into their collages. While medieval makers stuck to a tried and true formula, for today’s stained glass enthusiast, glass art can be whatever you make it. 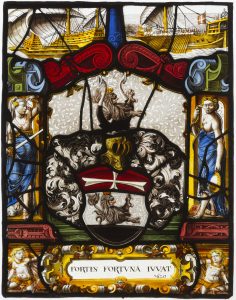 What to Look For

If you’d rather collect stained glass than create it, we can help with that as well. Tiffany lamps dominate the top of the market but because of their popularity, forgeries are common. According to experts, first assess the style. Look for a loose, organic shape with botanicals or natural patterns. Genuine Tiffany lamps will have strong colors and a variety of textures and stylized glass. You’ll see specks of color (confetti) and gold colors will have a translucent, amber sheen. If gold appears weak or greenish, you are looking at a reproduction. Silvery sheens are another sign of a fake. Experts also recommend lightly tapping on the shade. Authentic lamps will rattle slightly. If all else fails, nail polish remover should determine if the glass is painted instead of embedded with color as is usual with modern stained glass.

If you are looking for stained glass windows for your home, you can find 20th and sometimes 19th century pieces in restoration and salvage shops or in most places that antique goods are sold. In today’s world of energy-efficient living, look for windows with sturdy frames and tight soldering and have fun adding some color and light to your home.