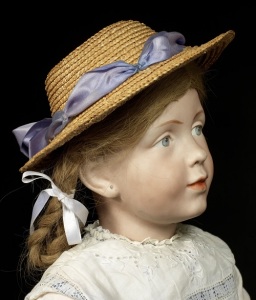 A rare German Kammer & Reinhardt character doll with plaited auburn hair, blue-gray eyes, lace-sleeved white dress, straw hat and white shoes and stockings sold for $395,750 at an auction held Sept. 24 by Bonhams in England. It was a new world auction record for a doll. Also, a bisque head Kammer & Reinhardt doll modeled after one of the daughters of Lewin-Funcke, the Berlin artist and professor who designed the doll, fetched $278,000; and a Kammer & Reinhardt “Heinz” character doll made $188,000. Prices include a 20 percent buyer’s premium.