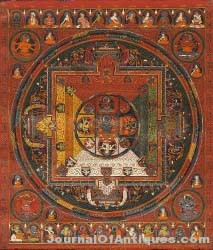 A 32-deity Guhyasamaja mandala set a new world record price for a 16th century Tibetan painting when it sold for $929,000 at an Indian, Himalayan & Southeast Asia auction held March 17 by Bonhams in New York City. Also, a Nepalese gilt copper figure of Yogambara from the 13th century realized $785,000; a 12th century copper alloy sculpture of Avalokiteshvara from central Tibet reached $569,000; and a Chakrasamvara mandala from 18th century Tibet sailed past its pre-sale estimate to hit $461,000. Prices include a 20 percent buyer’s premium.