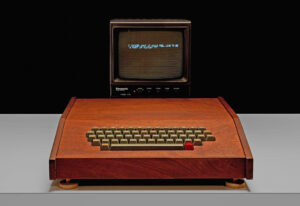 A vintage Apple-1 computer, known as the Chaffey College Apple-1 as it was originally purchased in 1977 by an electronics professor at the school (who sold it the following year to a student for $650) sold for $500,000 at a Postwar & Contemporary Art + Design sale held Nov. 9 by John Moran Auctioneers in Monrovia, CA. Also, a painting by Ariana Papademetropoulos (Am., b. 1990) earned $162,500; and a color lithograph by Alexander Calder (1898-1976) brought $8,125. The Apple Computer 1, originally released as the Apple Computer and known later as the Apple I, or Apple-1, is a desktop computer released by the Apple Computer Company (now Apple, Inc.) in 1976. It was designed by Steve Wozniack. The idea of selling the computer came from Wozniak’s friend and co-founder Steve Jobs. The Apple I was Apple’s first product, and to finance its creation, Wozniak demonstrated the prototype in July 1976 at the Homebrew Computer Club in Palo Alto, California. JOAC