Results of Recent Auctions From Near and Far 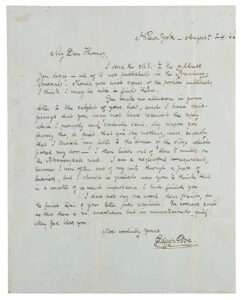 A rare Edgar Allan Poe letter signed and dated Aug. 24, 1846, in which he offers his condolences to a fellow writer, sold for $154,958 in an online auction held April 15-April 22 by RR Auction, based in Boston. Also, a George S. Patton typed manuscript and letter, discussing combat, its history, and its cause hit the mark for $29,475; a John Lennon typed letter with a self-portrait sketch went for $24,129; and a Mary Blair concept painting of Alice from Alice in Wonderland made $22,500.