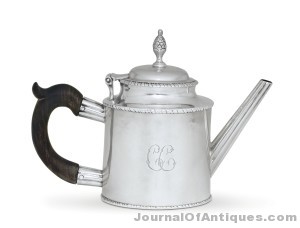 A rare silver tea pot made by Paul Revere, Jr., in Boston, Massachusetts (circa 1782) sold for $230,500 at a sale of Important American Silver held January 24 by Christie’s in New York City. Also, a silver, mixed-metal and hardstone three-piece tea service made by Tiffany & Company in New York (circa 1880) changed hands for $122,500; and an extensive silver flatware service, also made by Tiffany & Company in New York (circa 1890) soared to $98,500. In all, 49 lots sold in an auction that grossed $1.2 million. Prices include a 20 percent buyer’s premium.