Assembling Only the Best:
The Pedro Correa do Lago Autograph Collection 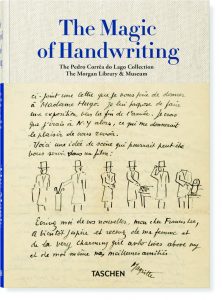 From June 1 through September 16, 2018, what is considered “one of the most comprehensive autograph collections of our era”* was offered on display at the Morgan Library in New York City. For anyone who missed this once-in-a-lifetime display of some of the most significant pieces of handwritten documents, art, lettering, and notes ever put to paper, have no fear. The accompanying book to this collection, The Magic of Handwriting,* is here to the rescue. The book covers only a small token of this collection that makes autographs turn into great insights into the past.
The collecting of autographs came into fashion because they—the signers—were important to us in one way or another. These collectors were everything from movie star fans to evidence-seekers looking to document history. But the collection of Pedro Correa do Lago goes even further to not only show the finished piece but share the knowledge of what circumstances went into creating it in the first place. Sometimes an item is not the finished piece but the notes and thoughts that went into its creation; a trip into the time and mind of those who worked to define the history of the event or record a memory or describe the stimulus to what has shifted our view to something … more.
During an interview with the BBC, Correa do Lago put it this way, “It’s the moment of creation that is materialized in that piece of paper.”

About Pedro Correa do Lago

Correa do Lago began his life as the son of a Brazilian diplomat working as the country’s ambassador to France. His perchance for collecting signatures started out at the tender age of 11, and from that time to the present day, Correa do Lago has gathered, researched, and expanded his mind from the over 100,000 hand-written or hand-signed documents in his possession. These include music, letters, drawings, official documents, and those things that struck a chord with his collecting aesthetic. His first items were obtained from a period when he chased down artists and writers hoping to build a relationship as a pen pal.
Among his first collecting efforts were letters to JRR Tolkien and Francois Truffaut, asking for their autographs. This was perhaps inspired by a large volume of Who’s Who that rested on his father’s bookshelf at the embassy. The results were not exactly inspiring for a burgeoning collector. Tolkien had stopped sending out autographs because the sheer volume of requests had become too much. From the Truffaut address … crickets. But then, the magic began when he discovered a copy of the book that inspired Truffaut’s film L’Enfant Sauvage, a film recently seen by the young man, that was inscribed by the master, himself. An obsession was born.
As he described it in a 2018 interview with The Guardian,

“He {Truffaut] changed my life. I was so excited, I wrote to lots of people. I would rush home from school to see if Joan Miro, Picasso, Chagall, or Iris Murdoch had sent me a letter.” (All did, apart from Picasso.) Correa do Lago prioritized his eminent addressees by age, to catch them before it was too late. This wasn’t always successful: he received a note from Ezra Pound’s sister, commiserating that his letter had arrived the day the poet died.

Letters became the favorite item for Correa do Lago to collect to the point that now he has the world’s largest collection of private correspondence. They occupy a few filing cabinets in his home where he goes to travel through time and visit with these friends. As he puts it, “Every collector feels as if he were a secret final addressee of the letter.”
In total, also according to the BBC, the collection includes tens of thousands of handwritten documents from 5000 of the most important figures in the fields of art, literature, history, science, music and entertainment since 1153.

When he is not seeking out and buying for his collection, Correa do Lago deals in contemporary Brazilian art, helping to fund his calling. His work as a curator includes exhibits at the Musee d’Orsay and the Musee du Louvre, where his outlook on art and knowledge of the industry made him well sought-after around the world.
Thanks to his childhood travels with his family throughout Europe and South America, his life has been full of educational experiences. He speaks five languages, holds a master’s degree in economics from the Pontifical Catholic University of Rio de Janeiro, worked as an antiquarian bookseller in Sau Paulo, and acted as Sotheby’s representative in that city from 1986 to 2012. He has written over 20 books primarily focused on his ever-growing catalog raisonne, with titles like Everything So Far or Complete Work (1816-1821).

When hearing Correa do Lago talk about items in his collection, you can’t help but be caught up in what happened in real-time to create each piece, as well as the insight his research and reaction to the item brings forth. For example, here are his thoughts revealed in that same BBC interview on a draft of the opening paragraph of In Search of Lost Time, a 20th century masterpiece. 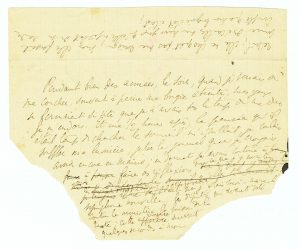 The book The Magic of Handwriting is a series of essays around the exhibition of the same name held at The Morgan Library and Museum in 2018. It is flush with descriptions that create the world within each piece was created. The book Everything So Far is also available in English, as is Frans Post 1612-1680; Catalogue Raisonne. And a good search on the Internet will also offer more information on this fascinating collector and his collection.