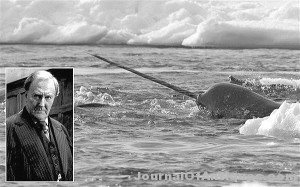 A 130-year-old narwhal tusk engraved with the name of a character from the Harry Potter books has been sold at auction in England for a little more than $50,000 (reportedly to an American maritime museum). Collector John Jeffries, 64, an Englishman, bought the tusk at auction himself around 20 years ago (for about $3,000) but only recently noticed it was engraved with the name of Cornelius Fudge, a Navy man to whom it had been presented in 1881. That’s the name of the Minister of Magic in the Potter books.
Jeffries, astounded by this, wrote a letter to author JK Rowling, to tell her about his discovery. She wrote back: “How utterly extraordinary! No, I made up the name Cornelius – or thought I did. I had never come across it and did not know of the existence of a naval C.F. Thank you for a most interesting addition to the postbag. With very best wishes, JK Rowling.” Jeffries graciously donated 3 percent of the sale price of the tusk to a multiple sclerosis charity, knowing that Rowling’s mother had died of the disease at age 45.

J.K. Rowling’s chair, in which she wrote the first two Harry Potter books, to cross the auction block