Comic Character Collectibles
By J.C. Vaughn
Following up on last month’s column, which saw Hake’s Americana & Collectibles on track to set multiple records for the company with Auction #223, the results surpassed expectations. The auction, which closed from Tuesday – Thursday, March 13-15, 2018, totaled $2,357,183.
This marked the first auction to surpass $2 million for the firm, which celebrated its 50th anniversary last year. It topped their previous record, $1.75 million, set in November 2017. In addition to the new record auction total, they also set house records for most bidders, most bids placed, and overall sell-through rate for the more than 2,300 lots offered.
Comic books and action figures from the Star Wars Collection of Russell Branton led the way for the auction, with a CGC-certified 5.0 copy of Detective Comics #27, the first appearance of Batman, scoring the auction’s top spot at $569,273.
Among the other notable comics, a CGC 4.0 copy of Action Comics #7, which features the second cover appearance of Superman, sold for $124,023, and a CGC 7.0 copy of Captain America Comics #3, which closed at $55,048 (the issue included Stan Lee’s first published comic book work and features a classic Red Skull cover). All prices include the 18 percent buyer’s premium.
This, of course, was their second consecutive auction to feature the Branton Star Wars collection. It always makes for intriguing auction watching when something lives up to the level of hype a collection of this magnitude received.
“Over the last few years, we have been privileged to receive consignments of great pedigree collections, both large and small. Russell Branton’s Star Wars collection has been an outstanding addition to our recent track record, which includes Disneyana from Maurice Sendak, and Pat and Doug Wengel, sports ephemera from Richard Merkin, comic books and original comic art from price guide founder Robert M. Overstreet, concert posters from Mark Arminski, Supermancollectibles from Franco Toscanini, and a wide array of items from noted historian Tom Tumbush,” said Alex Winter, President of Hake’s Americana & Collectibles. 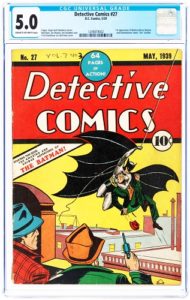 The Meccano Ben Kenobi 12-inch series AFA 75 Ex+/NM action figure from Meccano’s French 1978 toy series more than quad-rupled the low-end estimate of $400, by closing at $1,815. A 1980 Empire Strikes Back Rebel Armored Snowspeeder diecast 11-back-B DCA 75 Y-EX+/NM cleared $649, well over the $100 to $200 estimate.
The Star Wars Micro Collection Hoth Ion Cannon action playset AFA 85 NM+ more than doubled the high-end estimate of $700, realizing $1,555. The set contains a movable cannon, ramps, opening doors, battle damage features, and two simulated computer units, plus eight figures.
Hake’s, of course, made their reputation on political collectibles, and they seem not to have lost a step in that area either. The items in the Tuesday-closing portion of the event were led by several pieces of political memorabilia. The “Lincoln & Hamlin/Liberty & Union” unlisted horizontal format 1860 campaign banner brought $15,720. This is the only example known to have surfaced of the cotton linen banner, which measures 8″ x 36-3/4″ on early thin wooden frame.
A Roosevelt/Fairbanks “Souvenir of Pretzel Town Reading, PA” jugate button sold for $9,676. With Keystone Badge Co. back paper and horizontal bar pin, it ended at nearly double the high-end estimate of $5,000, and the “Hawthorne All Out for Eisenhower and Nixon” rare Ike button reached $5,062, far exceeding the estimate of $400 to $700.
J.C. Vaughn is Vice-President of Publishing for Gemstone Publishing. Amanda Sheriff-Bollinger contributed to this piece.