Comic Character Collectibles
By J.C. Vaughn
The success of Marvel Studios cinematic universe has certainly shifted the general public’s awareness of many previously lesser known character comic characters in the company’s pantheon.
James Buchanan “Bucky” Barnes was one such character, familiar to comic book fans but virtually unknown to the rest of the world. Only with him there was a difference: Bucky was known as much for his absence as for his existence.
Bucky had been Captain America’s teenage sidekick in the days of World War II, back when Marvel was called Timely and when so many colorful adventurers had young associates. In comic book form, their adventures continued after the war until the initial superhero craze petered out.
When writer Stan Lee and artist Jack Kirby, Captain America’s co-creator, decided to revive Captain America for the nascent Marvel Comics in 1964, teen sidekicks were passé. Bucky was said to have died in the duo’s last battle of the war, one that through Captain America into suspended animation.
Over the years, the deaths of comic book characters frequently have taken on a distinct ring of impermanence, generally with good reason. At various times, many popular characters have been killed off only to soon return to more acclaim (accompanied by a spike in sales, hence the reason for doing it).
From Captain America’s modern revival in the pages of The Avengers #4 to 2005’s Captain America #1, though, Bucky’s death was considered to be sacrosanct. Even the rumor of trifling with it brought derision and scorn from fans.
Yet writer Ed Brubaker and artist Steve Epting did not just tempt the fates, they bested them with a long-running story that began a decade ago. The resulting tale garnered both critical acclaim and sales, and it also spurred the creation of one of the studio’s most successful films, Captain America: The Winter Soldier.
The cinematic version of the story of the unlikely return of Bucky Barnes has captivated pop culture fans around the world. Its comic book counterpart likewise entranced two collectors, Nick Katradis and Jason Versaggi, who have staged an exhibit of Steve Epting’s artwork at Geppi’s Entertainment Museum.
Steve Epting Originals: Captain America and The Winter Soldier, featuring the artist’s originals from the collections of Katradis and Versaggi, is now open to the public. The exhibit is comprised of 46 pieces of Epting’s art, including 16 key covers from the series and 30 pages of interior art from the 2005-2011 Marvel series.
Included in the showing are Epting’s cover for the Captain America Omnibus, actually the first piece of art commissioned for the series, and the complete interior art for Captain America #11, the origin of The Winter Solider. The art is complemented by a variety of character statues and other three-dimensional material, as well as autographed comics.
Together Katradis and Versaggi serve as Guest Curators for this exhibit along with Michael Solof, GEM’s Collection and Exhibits Manager, and me (I was fortunate enough to develop the exhibit after interviewing Katradis and Versaggi).
Steve Epting Originals: Captain America and The Winter Soldier runs through Sunday, July 5. There is no additional charge beyond regular admission to see this exhibit.
GEM’s Artist Spotlight: Jim Aparo
Following its debut with the work of acclaimed artist Kelley Jones, the second edition of GEM’s Artist Spotlight series is up and running with the work of one of the great comic book artists from the 1960s through the 2000s. GEM’s Artist Spotlight: Jim Aparo showcases one complete, 13-page Spectre story from 1974’s Adventure Comics #435 by Aparo and writer Michael Fleischer.
Despite his prolific output for DC, the artist only penciled and inked a total of 88 pages of solo material featuring the character (Aparo also illustrated The Spectre’s team-up with Batman in The Brave and the Bold #116). The exhibit will run through July 1, 2015.
This original art, comes from the collection of Nick Katradis, who also is one of the two lenders of the art for the Steve Epting Originals: Captain America and The Winter Soldier exhibit.
The story is one of only three known surviving complete stories by Aparo featuring The Spectre. Katradis serves as the exhibit’s Guest Curator with Michael Solof. There will be no additional charge beyond normal admission to view this exhibit.
Born in 1932, Jim Aparo made his biggest mark on the comic book world with his distinctive work on DC Comics’ Batman, Aquaman and The Spectre.
Aparo passed away in 2005. 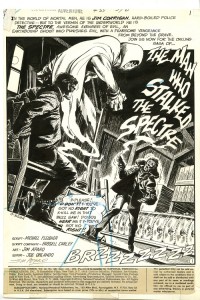 Zombie Gras 5 Takes a Bite Out of GEM
Zombie Gras 5 was held at GEM on Saturday, March 28, 2015, and the party spilled over to some of the best bars in the tourist-friendly Inner Harbor area. Zombies shambled and shimmied their way to the museum to get excellent make-up and make-up tips, compete in scavenger hunts, and prowl through its halls.
After four successful previous years, many attendees have become Zombie Gras regulars, sporting costumes that ranged from zombie doctors to zombie clowns, and even zombie soldier. One attendee paid homage to American Horror Story: Freakshow character Twisty while another bravely attended as Daryl Dixon from The Walking Dead TV show.
“I get to hear stories about how important this is for them,” Nadja Martens, Sales Manager at Geppi’s Entertainment Museum said about the repeat attendees. She went on to explain that some spent their birthdays at Zombie Gras and regular attendees who deal with physical challenges made it out to enjoy the day with like-minded eaters.
This marked the second year in a row where precipitation threatened to ruin the day. Despite travelling around the city in cold and snow, it didn’t stop the party. Some guests even commented that last year’s rainy Zombie Gras as one of their favorite events.
“It’s their event and we do it for them,” Martens commented about the loyal Zombie Gras fans. “I want to give them new things to look forward to each year. New bars, new crawl, hopefully new beautiful weather.”
J.C. Vaughn is the Vice-President of Publishing for Gemstone Publishing. Gemstone’s Amanda Sheriff contributed to this article.
The Art of Steve Epting and Jim Aparo Comes to GEM, Along with a Lot of Zombies

Preservation & Storage… And, of course, Zombies