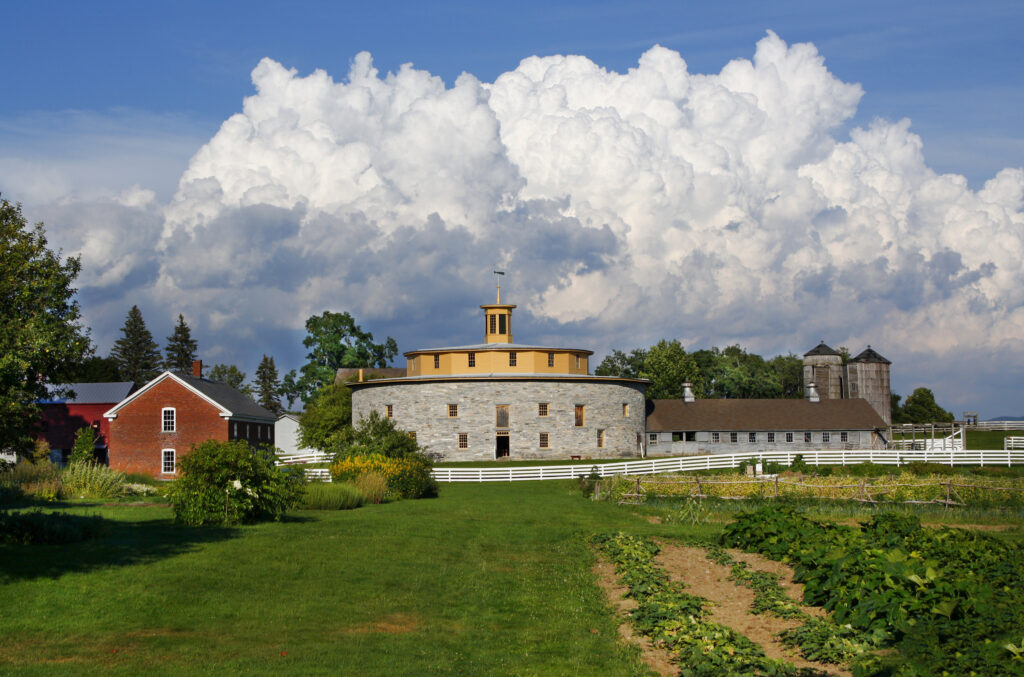 The Round Stone Barn at the height of summer, photo: Hancock Shaker Village

The Shakers are one of the most intriguing social and religious movements in American history. As the Shakers grew in influence and numbers in the 19th century, they challenged the existing social and religious structure and economic order of the new nation and eventually developed an alternative lifestyle based on their religious beliefs. The Shakers have made important contributions to American culture in the areas of art and design, music, science, architecture, craftsmanship, business, education, government, medicine, agriculture, and commerce.

Circles were important to the Shakers – they danced in circles, worshipped in circles, even built a circular barn. When the round barn was constructed in 1826, the idea was so controversial that the entire community had to vote on it.

And yet the form has endured, a beloved symbol of beauty and efficiency, with several hundred examples still in existence.

The Construction of the Round Stone Barn

Arguably the most magnificent building that the Shakers of Hancock, Massachusetts, ever erected, the Round Stone Barn is the first and only Shaker barn of its kind. All its limestone was quarried on the property and its circular design proved to be a model of efficiency. Because of its unique design, the Round Stone Barn was a curiosity to both the Shakers and “the world’s people,” as outsiders were called. Farmers and progressive neighbors such as Nathaniel Hawthorne and Herman Melville staged a footrace inside the structure in 1851.

The elegant beauty of its simple form with careful detailing to support its economy of function typifies Shaker design, which remains a lasting legacy today.

Originally stabling 52 dairy cows, the Round Stone Barn was rebuilt after a devastating early morning fire on December 1, 1864. It burned so hotly that some portions of the stone were converted into lime. Within a week, the Shakers came to believe that it was the work of an arsonist. The loss of the barn, adjoining sheds, 100 tons of hay, eight bushels of provender, and six wagons contained within was estimated to amount to $10,000, a tremendous financial blow to the community.

Improvements completed in 1870 included a flat monitor roof and cupola, a manure pit, and a clerestory level below the cupola, providing increased light and ventilation. Called a “banked barn” (because it is built into a hillside), it offers ground-level access on all three levels and a circular route – critical when you’re driving a large carriage with a team of horses inside and backing up can be calamitous. The upper-level balcony, spanning 75 feet in diameter, was used to unload hay; the central level, to store hay and house and feed cattle; and the lower level, to store manure until it could be transported to the gardens and used as fertilizer. Gravity assisted the work.

The 1826 Shaker barn received loads of publicity, but the design did not become popular until the turn of the century. By 1900, some agricultural colleges in the Midwest, particularly Illinois, pushed the design as they taught progressive farming methods based on industrial efficiency; the interior layout, for example, allowed farmers to work in a continuous direction. In the days before mechanization, laborsaving devices were a big seller.

The circular shape also allowed 360-degree ventilation and light. They were cheaper to construct than square or rectangular barns because they required less material. Round barns at the University of Illinois, in particular, increased the style’s popularity, as the university’s Agricultural Experiment Station started publishing regular bulletins touting round barns in the Illinois Agriculturalist.

The “Octagonal Era” stretched from about 1850 until 1900, and the fad spread to California later in the 19th century. There are about 20 surviving historic round barns in Canada and several hundred surviving in the United States – Hancock Shaker Village’s being the first one built in America.

Thought by the Greeks to be a symbol of balance in nature, the circle is a powerful shape, and Hancock’s (which is on the National Historic Register) consists of four large rings. The innermost ring is used for ventilation, to draw the moisture up and out of the hay, which prevents mold from growing and the hay from spontaneously combusting. Hay was stored in the second ring. And on the third ring, the Shaker brothers would walk (and probably sing) to distribute the hay from the second ring to the cows. In the fourth ring, 50 or more cattle were kept in wooden stanchions, which radiated outward from a central manger. The cows stabled on the main floor faced inward toward the haymow for ease of feeding. Standing there, the cows could eat while the brothers milked them. The floor of the outermost ring is split level, with the inner part raised up 3 inches. This was to prevent the milk buckets from being on the same level as the unsanitary manure. The Shakers also developed a way of efficiently removing the manure from the complex and using it for compost. Approximately every 4 feet around the outermost ring, there was a trapdoor that was used to quickly scoop the manure on the floor into the cellar beneath the barn. The storage area was accessible by wagon in order to transport the manure to the gardens.

The original barn, with its tall, conical roof, provided ample overhead space for men and animals, but the Shakers found that the central part over the hay wasn’t high enough. So they fixed it: They raised the roof (60 feet in diameter) over the hay and built a loft under the roof, which allowed them to put in windows all around the circle and light the barn almost in every part. In 1883 the round barn was “finished to perfection,” according to one Shaker, when they built a root cellar on the same level as the cattle.

The sect maintained a working dairy farm at Hancock into the 1950s, when the handful of remaining Shakers decided they needed to consolidate elsewhere, unable to run the vast property.

The settlement became a museum in 1960. In 1968, Hancock Shaker Village dismantled the masonry walls stone by stone and shored up the foundations — leaving the timber frame structure intact. Once a new foundation was laid, the masonry walls were rebuilt using the original stones. In 2008, paint analysis revealed that the exterior woodwork of the barn was painted yellow when the Shaker reconstructed it after the 1864 fire, and in 2009 the paint was restored to its original color.

The Shakers called their village the City of Peace and created an inspirational way of living with integrity while cultivating values of pacifism, racial and gender equality, and sustainability. The barn stands as a beacon to its legacy of exquisite design and agricultural innovation. “There’s as much reverence in pulling an onion as there is in singing hallelujah,” said one Shaker, and they did a lot of both.

Hancock Shaker Village is a landmark destination of 750 acres, 20 historic Shaker buildings, and over 22,000 Shaker artifacts in Pittsfield, Massachusetts. On the National Historic Register, it is the most comprehensively interpreted Shaker site in the world, and the oldest working farm in the Berkshires of Western Mass. For more information, visit www.hancockshakervillage.org

Author Jennifer Trainer Thompson is a museum director, author, and filmmaker. In 2017, Jennifer was named the Director of Hancock Shaker Village, a living history museum dedicated to preserving the legacy of the Shakers.

Agricultural Buildings in the Colonial Capitol and Beyond

Barns: A Disappearing Icon on the American Landscape