Cameos are one of the most widely recognized types of jewelry. Many of us may even own a piece, most probably handed down from a family member. These miniature relief sculptures have a history that pre-dates the birth of Christ by 300 years, with origins in the ancient carving traditions of the Egyptians, says Anna M. Miller, author of the book, Cameos, Old & New.

In the centuries since, cameos have been used for various purposes, made from a range of materials, and nearly always featured a raised (positive) relief image, most notably women’s profiles and scenes or personalities from Greek mythology.

Made in the Gods’ Images

Many tend to associate antique cameos with such decorative women’s jewelry as rings, brooches, bracelets, and pendants, yet cameos have in fact been worn and coveted as frequently through the centuries by men and were used to adorn helmets and military accessories like breastplates and sword handles. During the Renaissance, Pope Paul II was an avid cameo collector. According to history, this love ultimately led to his death. His excessive display of carved gems and stones on his fingers kept his hands so cold that he caught the chill that meant his death. Cameos enchanted Napoléon, who wore a cameo to his own wedding and founded a school in Paris to teach the art of cameo carving to young apprentices.

Women began collecting cameos to prove cultural status during the Elizabethan period when a single hand-carved semi-precious gem or cameo was an extremely rare and treasured possession. But it was during the early 19th century that the cameo moved from the realm of the wealthy cabinet collector to a broader audience.

Times of Travel and Collecting

Conch shell cameos were still being carved by hand at the turn of the 20th century, mostly by artisans along the Italian coast. They grew in popularity partially because the relative ease of carving into shell over stone opened up a whole new level of artistry. It also allowed for production carving, which was faster and more formulaic. The end result was a cameo that was both affordable and beautiful.

Cameos quickly became the perfect souvenir for those on their “Grand Tour” of Europe to experience the art and culture and mild climate of Italy and Greece. They would return from their journey with Italian carved shell cameo necklaces, rings, and earrings, or the even more highly coveted lava stone cameos, carved out of the earthy colored lava from the base of Mt. Vesuvius. The shell cameo industry in Italy increased in size to meet tourist demand. Even today, a visit to the Ruins of Pompeii includes a side trip to Naples to tour and shop the cameo factories still there after all these centuries.

Today, antique cameos are admired and valued for their craftsmanship, materials, setting, and of course, beauty. These treasures can be found at antique shops and shows, vintage jewelry dealers, estate sales, and online auctions, mostly in the $50 to $250 price range.

In part, cameos are de-valued because they do not appeal to young people or women, in general, today as a form of wearable jewelry. The cameo collectors of the 19th century have passed on their souvenir cameos or items from their personal jewelry collection to their children, and their children’s children, who today value their cameo jewelry for its family connections but have little interest, sadly, in collecting more or wearing what they have. There is, though, a growing interest among vintage buyers and collectors for cameos from the 40s, 50s, and 60s, but mostly in the $50 or lower range. Recently, contemporary fashion and jewelry designers have been breathing life into a new, modern representation of cameo jewelry, seen in collections from esteemed designers like Dolce & Gabbana, and in brooches, bracelets, and other artistic forms.

In 2018, Dolce & Gabbana introduced its Alta Gioielleria collection: thirty-two one-of-a-kind brooches, each handcrafted in coral, gold, and diamonds, their images and artistry an homage to the craft of traditional cameo making.

There is a niche market among specialty collectors for antique cameo pieces, especially those with provenance or that depict unique subjects, such as images of men and historical figures. A late 18th/ early 19th century hardstone cameo brooch designed and carved by Nicolo Morelli for Caroline Bonaparte, Napoleon Bonaparte’s younger sister, sold for a record price of $67,000 at Bonhams auction in 2015. Here, the history attached to this beautiful image, and an identified maker, all contributed to this record-breaking price.

Glass and hardstone were the oldest materials to be used in the making of cameos, with shell introduced as a relief backdrop for cameos during the Renaissance, in the 15th and 16th centuries, and later popularized by Queen Victoria of England.

All cameos are not the same or made from the same materials, so before you buy a cameo take a closer look to know what you are buying besides a beautiful piece of jewelry and art.

Color is the Key

The carnelian shell is the shell most frequently used for cameo carving. In color, carnelian shells are a low-intensity peach or orange color, bringing out a contrast between foreground and background colors.

The sardonyx shell has a thick outer wall and a dark brown interior, and when carved it can resemble marble. Cameos carved in sardonyx shells are distinctive in color with a dark brown background and a white foreground; frequently costing more because of the shells’ rarity.

Cameos carved in mother-of-pearl produce a cameo of an opalescent, bluish-gray color. These cameos are best set in silver.

Agate cameos are carved ultrasonically. Its hardness allows for greater detail than the softer shell. Blue or green in color, these cameos come from Germany and have a more modern look despite the fact that agate has been used for cameos for centuries.

Glass cameos are formed by pouring molten glass into an intaglio mold, which was typically made of clay. Vintage glass cameos can be found in stunning black glass and sparkling crystal, as well as rich shades of amber and amethyst.

Cameos made from lava are muddy-colored in appearance and known for their “biscuit porcelain” luster. The lava rock carvings from the Mt. Vesuvius region range in color from off-white or yellowish to varying shades of gray, when it has been dyed any number of deeper colors. Cameos of this type are easily identified both for the material they are carved from and the period when they were made. 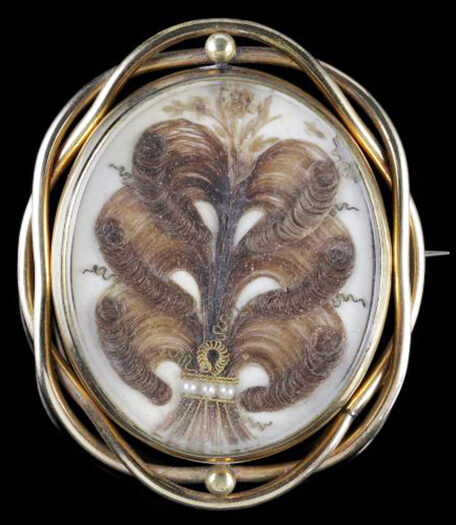 Is It Real or Fake?

Due to the enduring popularity of cameos, there are more realistic imitations nowadays than ever before. It can be difficult to know when a cameo is an authentic antique piece or a modern-day imitation, but here are a few things to consider: