by Raymond M. Farina
Collecting memorabilia from America’s past political campaigns and elections can be traced to the first inauguration of George Washington and the several varieties of then expensively made clothing buttons produced to commemorate that memorable event on April 30, 1789. There are over 27 different known varieties of uniform-type clothing buttons manufactured in metal, mostly copper and pewter which were often gilt. They are of a two-piece construction with a loop shank back and a thin flat metal surface struck with stamped designs incorporating such symbolism as: the eagle, stars, sunburst designs, scripted initials “GW” with slogans such as, “Long Live the President”, and “Remember March 4th 1789”. It is recorded that on March 4, 1789 the Constitution was officially adopted by eleven states thus ushering in a new era of government. It is a historical fact that George Washington himself wrote to request procurement of several of the larger buttons that he may adorn his inaugural vestments with them. Revered by collectors today, surviving examples of these buttons can fetch on average between $2,500 and $6,000 apiece depending on condition and type. The rarest and most desirable of these is arguably a variety struck with an image of Washington and the Latin slogan, Pater Patriae which loosely translates to, Father of the Country. An example of this rare button can command into the 5 figures. Indeed these devices were among the best work of American-made manufacturing at the close of the 18th century.
Political memorabilia has always followed the course of advancing technology and new developments in manufacture. One of the more interesting aspects of building a well-rounded general collection of political memorabilia is being able to assemble material objects that represent both the fancy of the American public over time and the evolution of the American manufacturing processes across a wide variety of different genre. 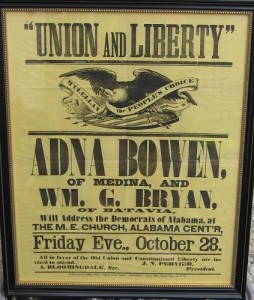 Since presidential political items in the early days became the dominant means of conveying to the mass public what a candidate looked like, and what his political agenda might be, businesses of every type were quick to place a face and a name or campaign slogan on everything they made. Thus, for the political collector, a proliferous offering and virtually limitless selection of depth and breadth became suddenly available every four years. From sewing and notions boxes to snuff boxes, from buttons and brooches, toys to textiles, ceramics, and glassware in every form imaginable, statuary & figural art, printed silk ribbons, printed paper broadsides, trade cards, sheet music, posters, and every manner of lapel device, all could be made to carry images or messages of the candidate.
Utilitarian objects were not overlooked either. Among the artifacts surviving today one could build a sizable dimensional collection that might include: umbrellas, straight razors, watch fobs and watches, canes, clocks, hats, lamps, advertising tins, trivets, spoons and knives, hair brushes, combs, novelties of all sorts, and the list goes on infinitum!
The earliest presidential elections involving the five founding fathers: Washington, Adams, Jefferson, Madison, and Monroe offer the least material available in the hobby and virtually anything dating to the presidencies for any of these men is highly coveted and almost always extremely expensive!
By the late 1830s and early 1840s political campaigns began to utilize all sorts of objects during public events to secure their candidates into the hearts and minds of the constituency. Staged political events such as stump speeches, torchlight parades, and pole raisings, brought many people together and yet another genre of campaign relic emerged. A wide variety of political torches and parade gear can be found today. Uniforms, hats, belts, helmets, and headgear complete with oil torch affixed, and heavy protective canvass capes to prevent the wearer from being scorched by his own enthusiasms! Campaign parade gear with elaborate decorative character can sell for hundreds of dollars. Parade torches are another collecting specialty and most are quite affordable selling in the $40 to $400 range. The most expensive of this type of relic, however, are pierced tin campaign lanterns. Some have intricate designs with the names of the candidates punched into the tin body such that when lit by an interior candle would cast an easily read illumination against wall or other flat surface. A single example of a pierced tin lantern for say Henry Clay or Andrew Jackson will easily set today’s collector back several thousand dollars if he or she is at all lucky enough to encounter an opportunity to purchase. These items are so rare that only a couple dozen varieties at best are known to exist among a handful of early presidential candidates, and of these most examples can only be seen in museums or in highly sophisticated privately held collections.
There are also great colorful oil cloth parade banners with the candidates likenesses emblazoned on them, some as large as to span across the streets of a town. One such example is a tremendous hand-painted double sided banner from 1844 featuring images of James Polk and George Dallas that recently sold in Heritage Auctions for a record price of $185,000 dollars, more than any previous banner of its type! 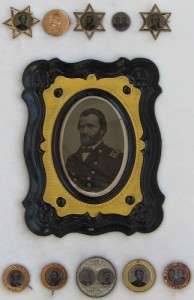 As advancements were made in photography towards the close of the 1830s, the daguerreotype ushered in a new means of exposing the public to political personalities, followed later in the 1850s by the ferrotype or tintype. The ferrotype and its vast array of collectible ornamental frames are a favorite among collectors of political pinback devices for campaigns dating from 1856 up to the 1880s. Ferrotypes range in price and value from around $200 to thousands of dollars each depending on the candidate or the unusual characteristics of the (usually) brass frame settings.
At about the turn of the 20th century came an advancement that would revolutionize the hobby of collecting political memorabilia forever – the celluloid campaign button. After the discovery of celluloid by inventor John Wesley Hyatt and his brother in 1868, celluloid had gained some momentum in the marketplace for commercial uses such as piano keys, eyeglass frames, and other things. In December 1893 a patent was granted to a Boston woman named Amanda Lougee for a clothing button covered with a thin sheet of transparent celluloid. Her patent was soon purchased by the Whitehead and Hoag Company of Newark, New Jersey. In July of 1896 the first celluloid campaign buttons as we know them today were manufactured. These included paper designs from as tiny as 5/8 of an inch in diameter to as much as 10 inches in diameter, covered by a thin layer of celluloid, crimped with a metal collet or ring, behind which a pin or other fastening device would reside.
Thus the period from 1896 to 1916 is often referred to as the golden age of the political campaign button. Up to this time, never had there been such widespread use of pinback lapel creations utilizing the finest in full-color lithography processes which carried photographs, poignant platform issues and campaign slogans of the candidates.
It so happened that the campaign of 1896 pitted William McKinley who was in favor of keeping the U.S. currency standard based on gold bullion against William Jennings Bryan who favored a blended standard of 16 parts silver to 1 part gold. The country was electrified by the divisive debate and clearly the currency issue became the single most important focal point of the campaign. As the campaign waged on, the more divided the country became. Those supporting McKinley became known as goldbugs while those supporting Bryan were called silverbugs. It was all such wonderful fodder for manufacturers and distributors of campaign buttons as the popularity and demand for buttons became insatiable!
Political buttons eventually evolved from the early celluloid covered examples to acetate covered specimens produced today, and with the advent of the tin lithograph process around 1920 they would be made much more cheaply, much faster, and in greater quantities by the batch. It is generally accepted that the political button is the cornerstone in the hobby of collecting political memorabilia. This for good reason: they are small in size, easy to display in large numbers, and do not take up much space. They can also be attractive, visually interesting, poignant in message, and considered by many to be stunning works of art in their own right.
There has been much written documenting the various elections and designs employed by the campaign button with the three-volume series authored by Theodore L. Hake considered the bible for political button collectors. The values of political buttons vary greatly depending on several factors such as condition, desirability of candidate, election year, and scarcity or rarity of a particular design. It has long been acknowledged that the campaign of 1920 featuring buttons with jugate or co-joined images of James Cox and a young Franklin Delano Roosevelt are the so called ‘holy grail’ of political campaign button collecting. These pins have been known to bring at auction upwards of $20,000 to $30,000 or more depending on condition, size, or other specific attributes of the button. The Cox-Roosevelt jugate may not, however, be the rarest or perhaps even the most desirable among presidential campaign pinbacks. There are pins relating to Theodore Roosevelt that could easily fetch nearly as much, and the same could be said of specific buttons for Woodrow Wilson, Charles Evans Hughes, Calvin Coolidge, and John W. Davis. 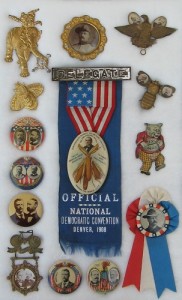 That said, most campaign buttons are quite affordable selling for less than a dollar up to $10 or $15 for older pieces with pictures of the nominees. One could easily build a respectable collection containing a pin for each main party candidate from each election from 1900 to present day for perhaps a few hundred dollars.
The simple fact is that there are new and historically important finds being discovered all the time across the rich gamut of this great hobby. These finds emerging from old-time collections just now freshly coming to the marketplace, or from a hitherto unknown caches of material long buried in someone’s attic or basement, continue to press the upper thresholds of the avid political collector’s resources shattering old price ceilings and breaking new ground in the hobby’s unquenchable thirst for the best of the best.
America’s rich political history is immanent in the objects associated with all fifty-seven past presidential campaigns and continues to inspire and energize a fiercely dedicated legion of collectors, political enthusiasts, history buffs, and those just interested in having some fun hunting up the next great find!
The author has collected political memorabilia for over 40 years and is happy to answer inquiries regarding this article by email at: rfarina1@nycap.rr.com

Seeing The Presidents Through Glass