by Gary Sohmers
In the beginning, there was art.
Then music, performance, and finally, advertising.
So begins the growth of the cultural arts,
a path towards enlightenment,
amusement, and profitability.
Most early musical and theatrical performances were promoted in printed matter in the form of broadsides, handbills and leaflets. In the early 19th century, classical music, church, and Shakespearean-styled performances were promoted on black and white letterpress posters featuring mostly words, dates, and the occasional engraved image. Most of these stylized objects do not have great value unless the graphics are exceptionally unique.
The growth of touring theater, musical acts, and movie theaters in the early 20th century brought about the need for letterpress printers to more cost effectively produce posters, which were mostly attached to telephone poles now dotting the cityscape, and in store windows. Big bands were the first of the new popular musical styles to be featured prominently as advertising for events and recordings, as they toured the small towns and big cities and had hits on the new AM radio bands everyone was tuned into. There is a small demand and reasonable supply of most Big Band-era posters, and they typically sell for less than $50; however, posters from
Blues artists can sell for thousands. The two biggest providers of cardboard “boxing style” concert posters were the Globe Poster Company of Baltimore MD1 and Hatch Show Print of Nashville TN2.
After World War II, the music touring and recording industry grew by leaps and bounds as Big Band, Rhythm & Blues, Country and other popular music acts were playing ballrooms, theaters, high schools and nightclubs coast-to-coast. As a result there was an increased demand for advertising materials. Many posters featured pictures of the performers but the goal was to clearly state the date, place, and performers. Many of the posters from this era are valued based on the performers, with Blues and R&B touring shows and early rock and rollers realizing the most value.
While this form and style of posters was all well and good for promoting musical acts, bands and performers in the 1950s and early 1960s, by 1965 tastes in music and art were changing. Musicians were being influenced by Modern Art, comic books, film, Disney, Picasso, Dali, and other modern art movements, as well as by marijuana and LSD. Some musicians turned to the creative artists in their own circles to design and print their concert posters. In June of 1965, a folk rock group of San Francisco musicians called The Charlatans went off to Virginia City, Nevada to perform a series of concerts at the Red Dog Saloon involving LSD provided by Owlsley, and produced the first “psychedelic” concert posters, created by artist/musician George Hunter.
San Francisco became a prime point of reference for the merging of psychedelic music and art, each being part of the human experience related to the performance. The Acid Tests at Longshoreman’s Hall and at Golden Gate Park, along with the Fillmore, Avalon, and Carousel Ballrooms became the epicenter of the “psychedelic scene.” 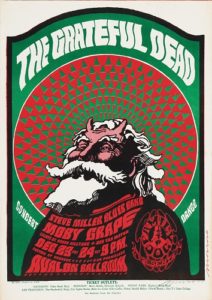 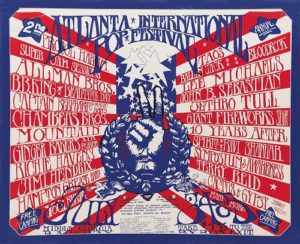 Vintage and modern concert posters can be acquired at credible auction sources such as WeissAuctions.com and ConcertPosterAuction.com. Several websites offer vintage and modern posters for sale including dking-gallery.com and OddToes.com. ExpressoBeans.com is a website that has listings of thousands of posters and artists in order to get detailed information about print runs and recent sales info.
Author Gary Sohmers is well known in the concert poster and popular culture marketplaces, having been a musician, recording artist, concert promoter, concert poster artist, booking agent, producer, radio talk show host, host of talk radio program “Calling All Collectors” on WCAP radio every Tuesday, an expert appraiser for 13 seasons on PBS TV’s “Antiques Roadshow” and producer of the Northeast Comic Con and Collectibles Extravaganza. Gary is available for appraisals of concert posters, music memorabilia and pop culture collectibles for insurance, donation, tax or probate needs. Gary also buys and sells items on consignment. wexrex@aol.com; NEComicCon.net

Selling the Dream: The History of the Travel Poster