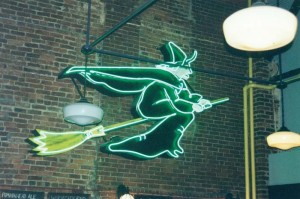 By Pamela E. Apkarian-Russell, The Halloween Queen®
Salem Village, called Danvers today, does not capitalize on the Salem Witch tragedy that took place there in the 1690s. Today, because Salem has adopted the moniker “Witch City,” everyone assumes that is where the problem began. The misuse of power and authority by the church and the ruling bodies was steeped in misogyny, hypocrisy, intolerance, and the desire for power, which was achieved through obtaining land. Land was considered wealth, and for one (Cotton Mather) the coveted position of president of Harvard College. The fact that people and even a dog were put to death, tortured, and their lands and goods confiscated, seems to be forgotten by many, or considered incidental.
The Salem Witch Trials was one of those dark segments in history which seems to be repeated over and over. (For example, The McCarthy trials represented the beliefs of a few rather than the beliefs of the American people. Those few did not have their country’s best interest at heart.) Because these women and men of Massachusetts were put to death, they became icons and heroes to the families they left behind and the many generations that followed. People came to the area to see: Rebecca Nurse’s home, Gallows Hill (no one is certain where it is), the original documents from the trial that reside in the library, the meeting house where Parris preached, and anything or anywhere relating to this blot on America history.
This was a historic tour-the social history of a time Americans could not be proud of but could and can learn much from. None of those arrested, tortured, or put to death were witches. Discriminating against other beliefs, which was exactly what the Pilgrims did not want for themselves and why they came to the new world, they certainly were intolerant of any anomaly. If the crime was to sour one’s neighbors’ milk, that was not a capital offense. Infant mortality and deaths at childbirth were unfortunately very common.
Think of the person who you know that does not like you or envies you: if a relative of theirs passed on and they had a dream where that relative appeared and said you murdered them, even if you did not even know them, you could be convicted of murder using spectral evidence. If someone coveted your antiques sufficiently they could call you out as a witch and all your possessions would be forfeited. Guess who would be a major beneficiary? Spectral evidence was eventually disallowed and mainly because of the amount of mischief that was caused by it. Thomas Putnam and the Reverend Samuel Parris certainly benefited financially by the trials and there were others who held power and rewards above truth. How does one defend oneself against such stacked odds? 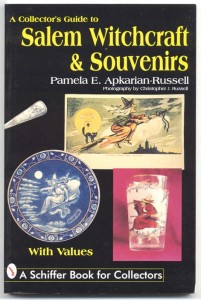 By: Pamela E. Apkarian-Russell
with photography by Christopher J. Russell
Publisher: Schiffer Publishing
Pages: 146
Price: Softcover $19.95
The Salem Witch trials were one of the darkest chapters in American history. With absorbing historical narrative and 300 photographs, Pamela E. Apkarian-Russell recounts three hundred years of a city’s past, from the trials themselves through the 1890s, when Daniel Low produced the first souvenir spoon, to years of memorabilia and collectibles.
The historic sites in Salem are documented through their many changes. These tourist meccas are visited by tens of thousands of people each year, whose purchases have helped to create a photo album of printed images and a treasure trove of silver and china souvenirs showing both witches and the historic sites. Separate chapters in this book illustrate the witchcraft theme as depicted on jewelry, silverware, cups and saucers, assorted chinaware, bottled goods, and a host of other interesting items.
[amazon_carousel widget_type=”SearchAndAdd” width=”550″ height=”200″ title=”Books by Pamela E. Apkarian-Russell:” market_place=”US” shuffle_products=”False” show_border=”False” keywords=”Pamela E. Apkarian-Russell” browse_node=”” search_index=”Books” /]

What are your thoughts on the Salem Witch Trials?

One thought on “Daniel Low & The Salem Witches”