This outstanding Canada goose by Nathan Cobb, Jr. sold at auction for $118,000. 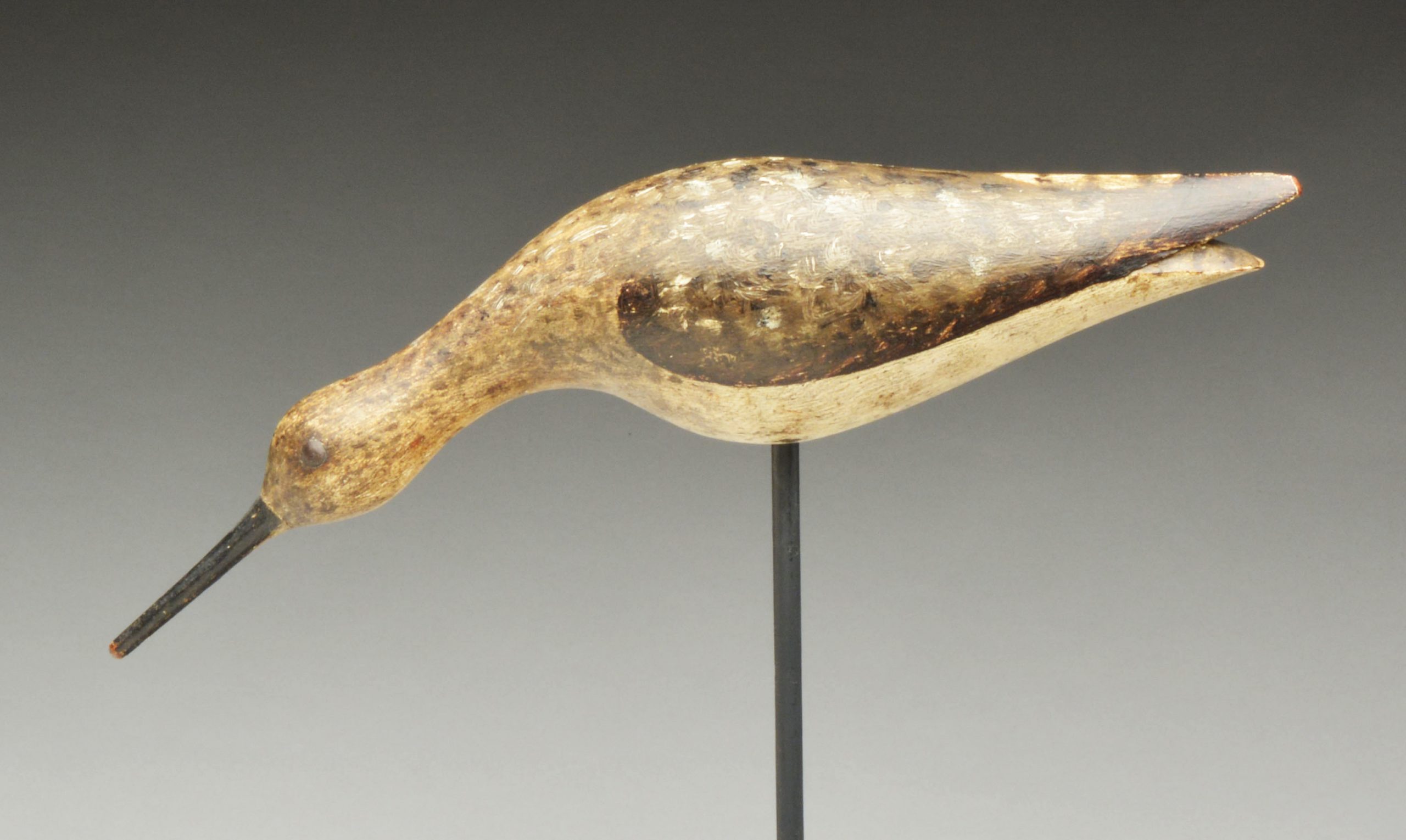 This feeding Yellowlegs by Lothrop Holmes sold at auction for $82,600. 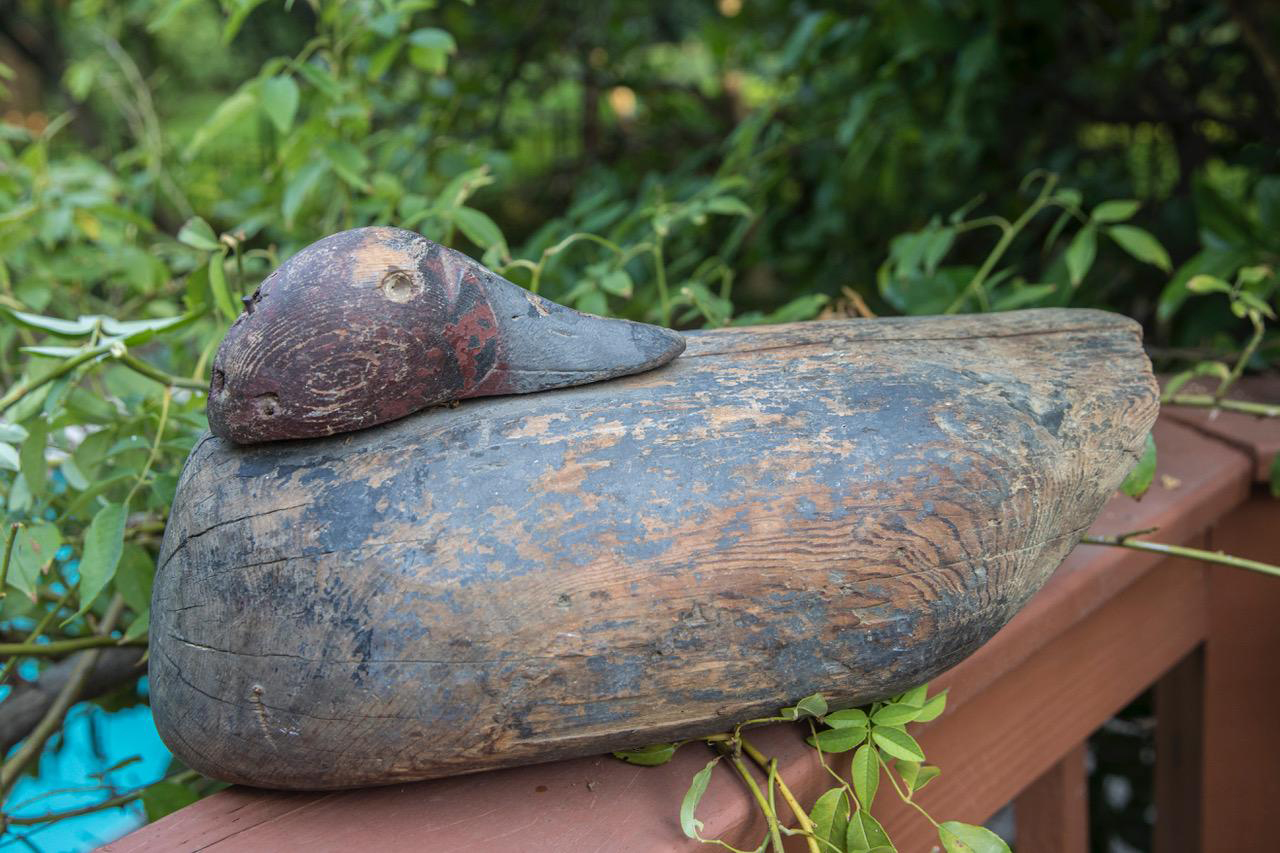 Old quality decoys can have significant value. This decoy has what appears to be a “Back Bay” Premier Grade, Mason Factory Canvasback drake head on an early South Carolina, oversized Canvasback body. (photo and text: Ron Gard)

Naturally, the decoy marketplace has not always been so pricey. It took time to get there. The first decoy book of any significance, Wild Fowl Decoys, was written by Joel Barber (1876-1952) and published in 1934. He was an early 20th century architect from New York City who was a pioneer collector and promoter of duck decoys as American folk art. His own collection began when, by accident, he found a Red-Breasted Merganser hen near his Long Island, New York boathouse.
A brief sample of Barber’s writing sets the stage for the fascination, if not downright compulsion, that compels today’s decoy collectors to pursue the finding of “just one more great old decoy.” In the first chapter of his book, Barber declares: “I am still collecting, still lured and victimized by decoys. On a visit to Knotts Island, Virginia, for example, I add to my collection a group of old-time Ruddy Ducks. They were very old and of singular perfection … In the very act of opening the door of the old boathouse where I found them, I recognized historical ground. The Ruddies, six or eight of them, lay forgotten in a corner with miscellaneous gear … All were scarred by service and bleached by exposure. Only traces of the original painting remained, but the bottom of each decoy, burned deep on the dead rise (sloping surface), bore the initials – L.D., the mark of “Mr. Lee Dudley,” one-time professional gunner and celebrated decoy maker.” It is reminiscences such as this that still motivate ever-optimistic decoy collectors today.

It was thirty-one years later, 1965 when two more seminal decoy books were published. Adele Earnest brought her The Art of the Decoy: American Bird Carvings to press, and William J. Mackey produced his American Bird Decoys. It did not happen overnight, but a new generation of nature-minded, folk art enthusiasts was taking note of America’s decoy history.
In the Foreword to the Earnest book, Mary Black, the Director of the Museum of Early American Folk Arts in New York, writes: “The American wildfowl decoy is here presented as an art form both useful and beautiful … Decoys are explored here, for the first time, as folk art … Mrs. Earnest’s book establishes the decoy as a fascinating, unique, and indigenous American folk art.” 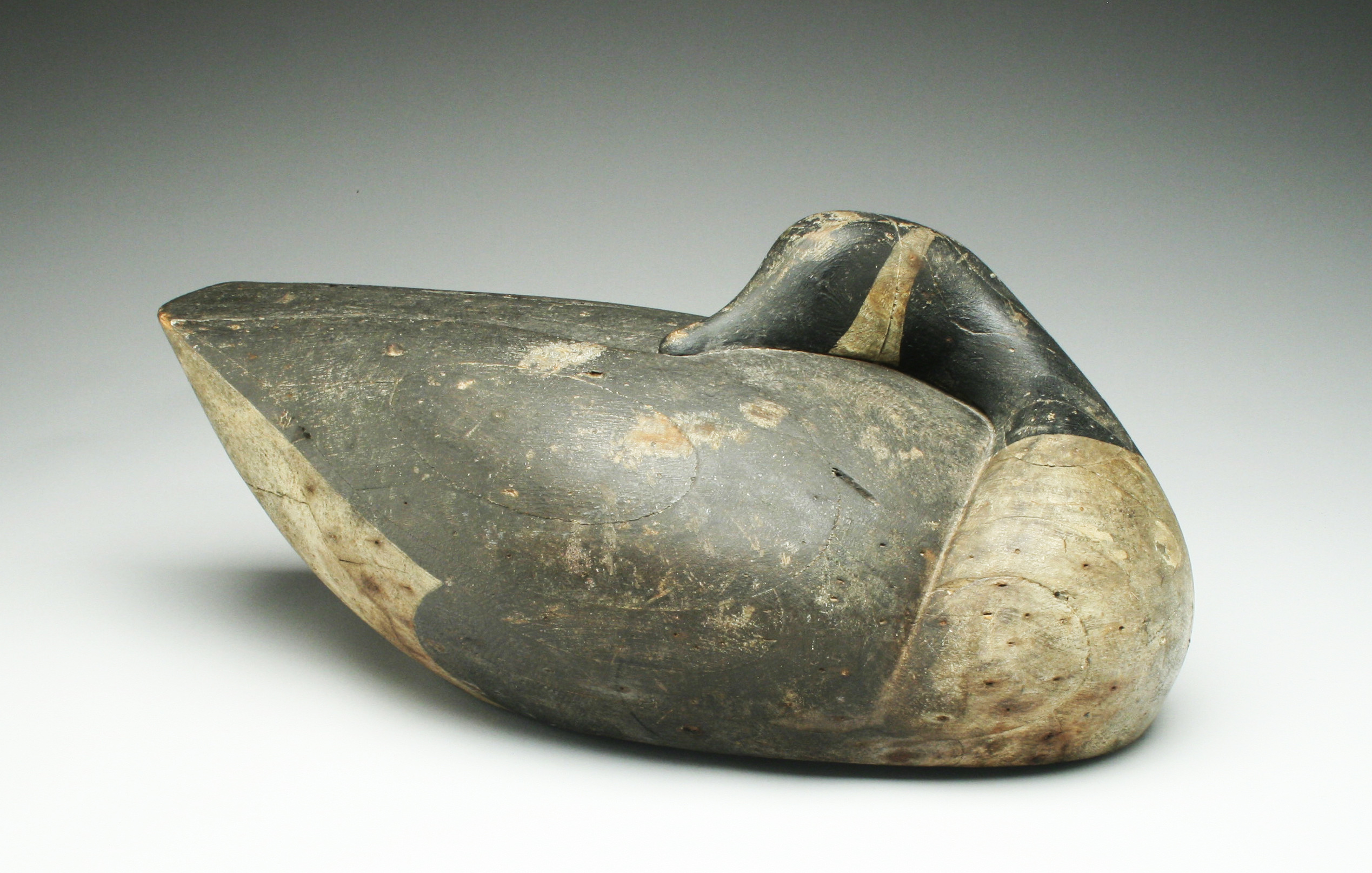 This important Canada goose by Charles Safford sold for $517,500, a record price for a
Safford decoy, making it the 12th most expensive decoy ever sold at auction.

In her opening pages, Adele Earnest writes: “Why did the decoy arts develop only in America? It is evident that only in North America did the carving of wildfowl lures
develop as a popular art of diverse and multitudinous proportions.” She goes on to cite the reasons for the widespread development of decoy carving in America. First, she says, there were birds, countless numbers of them. “They were here, the largest bird migrations in the world. A flight of geese could take all day to pass, and then darken the face of the moon by night. The wildfowler had rich opportunities.” Secondly, she states “There was a necessity. The new settlers needed game to augment their food supplies.” Her conclusion, though, argues that “the basic notion of the decoy was already here – the idea of making a bird to catch a bird. Long before the coming of the white man, the American Indian had conceived this brilliant notion. The Indians made decoys as early as A.D. 1000.” 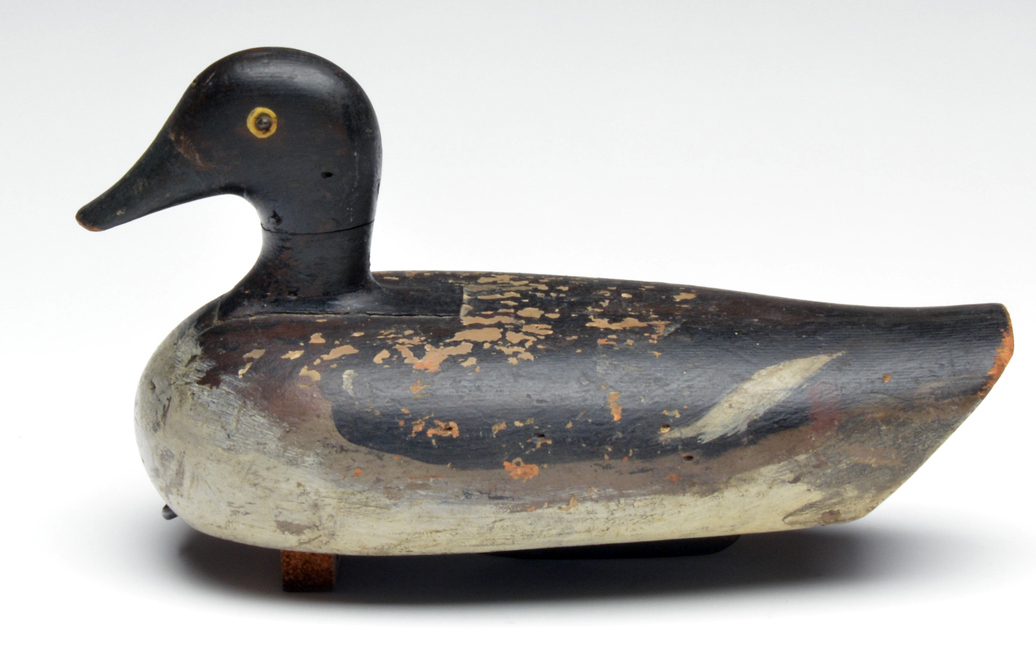 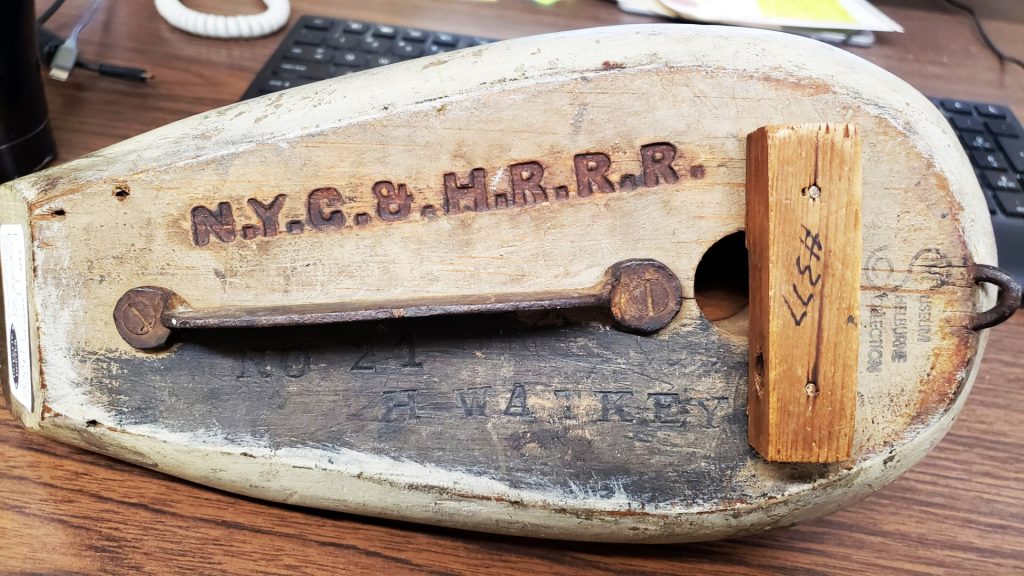 William Mackey, in the Foreword of his book, writes: “It is the aim of this book to focus attention upon the rich heritage of collectible decoys that have been made and used in America during the past century or more, to describe their inimitable characteristics, and to tell the colorful stories of the men who made them.” He goes on to tell the reader that the material in the book “has been almost forty years in the gathering. It all began for me when, as a young man, I picked up a no longer useful shorebird decoy, admired it – and became a collector.” Mackey’s book is filled with detailed descriptions of the decoys he collected and also the story of how, when, and where he found them.

A personal note regarding William Mackey: About fifteen years ago my wife and I visited Delbert Lee “Cigar” Daisey at his carving studio in Chincoteague, Virginia. He regaled us with stories about old decoys and decoy carvers on the Eastern Shore (VA). One of his stories had to do with his being a Picker for Bill Mackey. During that period of time when new lightweight plastic decoys were all the rage with Market Gunners and duck hunters in general, the old, heavy, wooden decoys were being tossed aside (and even used for firewood) by many. Cigar told us that Bill Mackey paid him to drive up and down the Coast in his pickup truck and buy the old discarded wood decoys for him to sort through and then save or sell them. That was, of course, a period of time when the value and collectibility of vintage decoys were not widely known or appreciated. Needless to say, Mackey ended up with a great number of vintage decoys that years later would sell at auction for prices never dreamed of at the time that he bought them for “pocket change.” Many of those discard decoys that were picked up by “Cigar Daisey” for Mackey are in high-end collections today, valued at 5- and 6-figures.

Today’s World of Decoys is light years different from that of the era when the three books we have mentioned here (1934 and 1965) were published. New generations of carvers have come and gone. Many non-vintage decoys created by contemporary carvers have found an important place in the decoy marketplace. For many present-day collectors, “old” and “vintage” are just two of many descriptive words that are important to the serious collector. The quality and style of decoys made by some contemporary carvers are very high indeed.
A final point should be made with regard to the collecting of American decoys. Actually, it applies to the collecting of any vintage artifact. Always, of course, there is the artifact; but then there is also the story, the history of the artifact. In some instances, perhaps even in most cases, the story of the artifact is as important, perhaps even more important, than the artifact itself. I believe that “across the board” collectors today are increasingly aware of the importance of the story behind the artifacts that they collect. That’s a great thing, and it adds both interest and value to any collection. So, Happy Collecting Everybody!

Stan Van Etten has published Hunting & Fishing Collectibles Magazine for the past 19 years. He can be reached by email at hfcollectibles@aol.com or by phone at 336-593-9477. The magazine’s web site is HFCollectibles.com

All photos and captions, unless otherwise stated, are courtesy of Guyette & Deeter Auction, Inc. 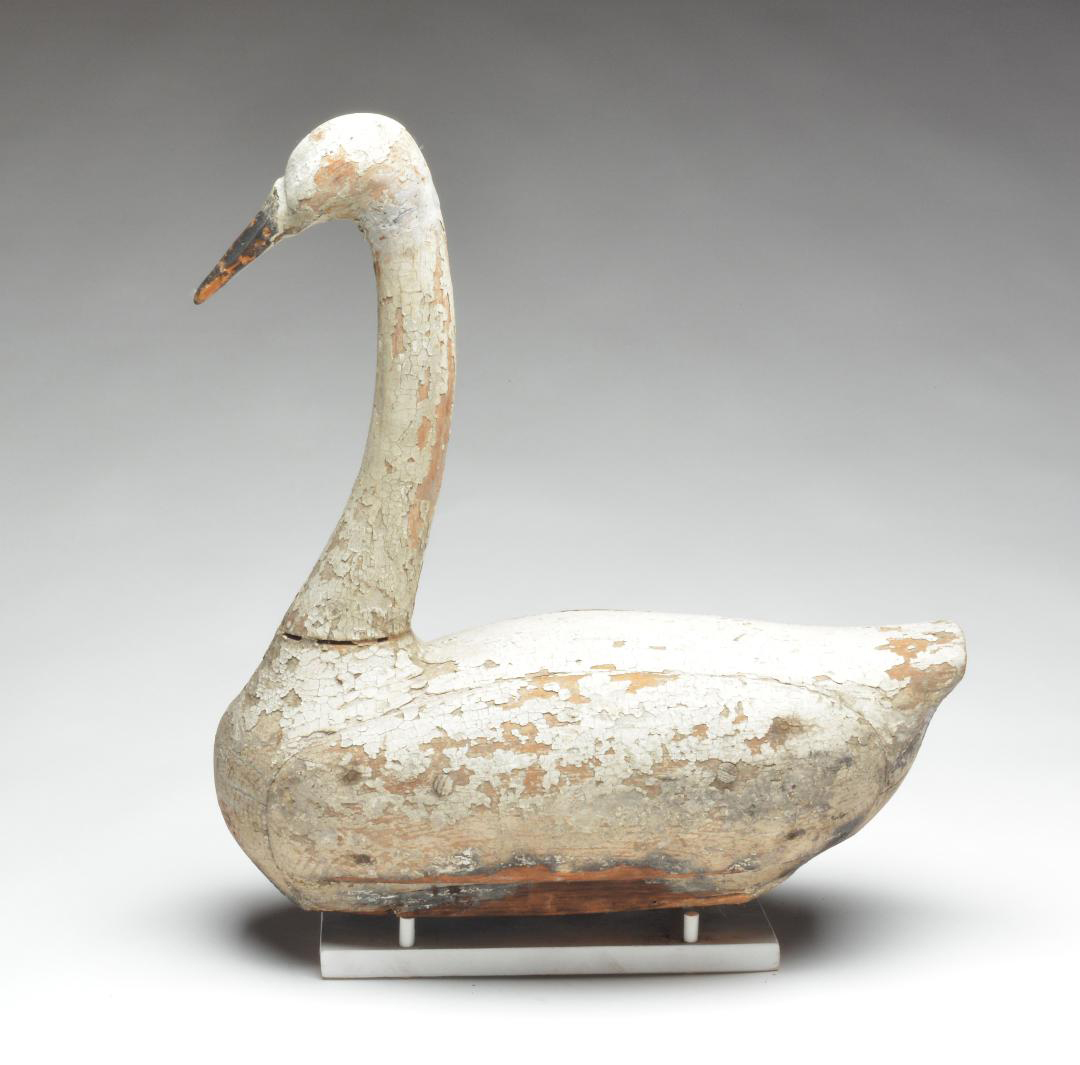 The important long-neck swan from Hoopers Island, Maryland described in Adele Earnest’s Bonfire of the Swans is the exact decoy pictured in the book. It brought $47,200 at auction. 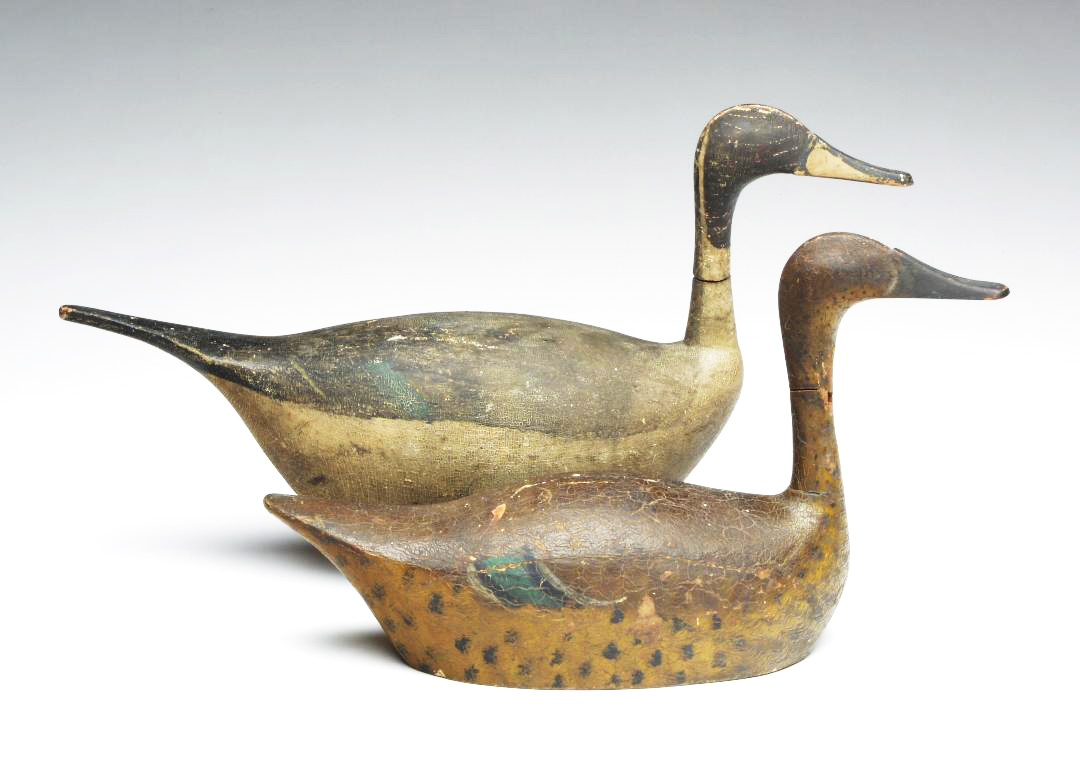